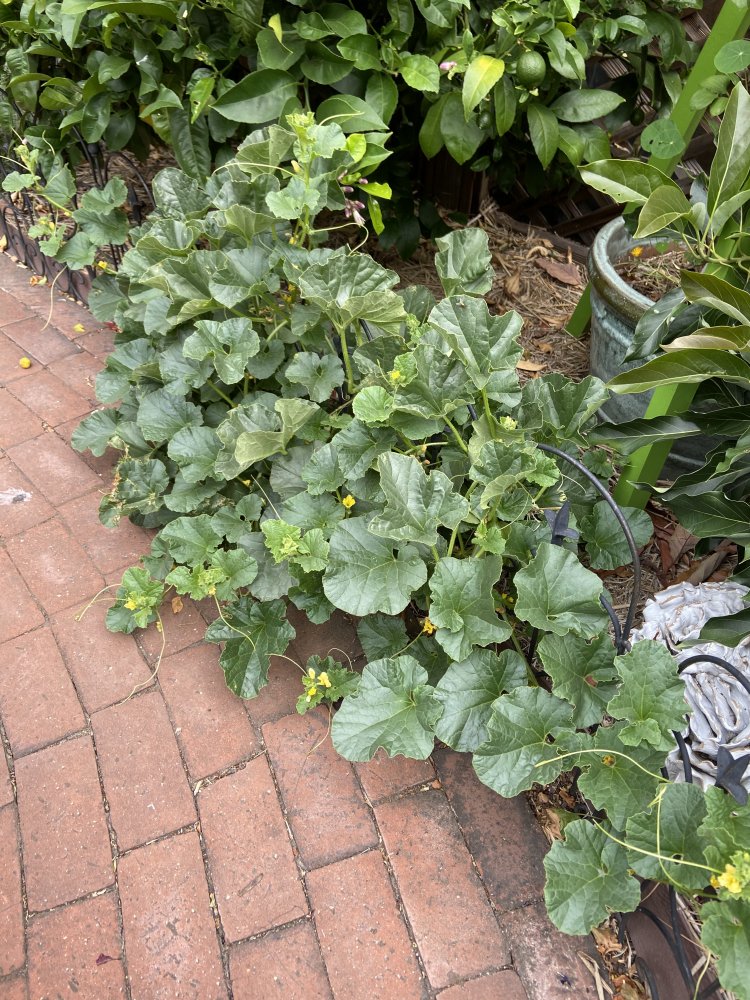 Seedcorn, if I remember correctly, the germination on parsnips is very low to start with. Sounds like you really got a dud package.

I picked my first green beans in the last couple days, they are the Fortex I had left over from two or three years back. I am happy to say they do look like Fortex, and not some weird fat tough bumpy stringy greasy cut short bean, like I inadvertently introduced to my garden a few years back.

I have been going mulch-less this year, trying to cut down on the squash bugs and all the other critters that I have been plagued with the last two years. So far, so good. Lots of hoeing and digging weeds out, but plantings look good. I planted some white granex onion plants that I got at the grocery store, just on a whim. They are the biggest I have ever grown, some the size of a soft ball. Their tops are starting to die down, so it will be pulling time for them soon.

Broccoli and dinosaur kale are growing great guns. Finally noticing worms on the leaves, so I had to go buy some more Dipel dust.

The weather is starting to act like the summers I remember: hot and so humid you can't breathe. I will need to change my routine and start going out to do garden work early morning, rather than evening.

Oh, and one more thing of interest: My tomato plants aren't turning yellow at the bottom like they usually do. I am trying to figure out if it has to do with the lack of mulch or the weather...or any other variable. Same packet of seeds as used before. Same method of bringing them to transplant.

Germination on packets is federally mandated. I have no doubt based on the test they used (they can run 100 tests & if 1 passes standards, that's the one they use.) that the seeds met standards. What is not mandated is vigor.

My main complaint is people saying we are an American company but don’t tell you that they sell foreign goods. Had that been a piece of machinery, it would have had to be stated that they used foreign parts or assembled elsewhere.

Will be interested in your review of this melon.

seedcorn said:
Had that been a piece of machinery, it would have had to be stated that they used foreign parts or assembled elsewhere.
Click to expand...

I have a dolly that says "Proud to be assembled in the US". That does not say where the metal came from, where the tires came from or who manufactured them, or who manufactured the pieces. The welding may have been done in the US, may not, and probably was done by robot anyway. When I see that I always wonder if they put the axle and wheels on in the US and called that assembly. They don't mention parts at all.

Can you tell I'm a cynical old man?

Just weeding. Cucumbers are up and squash and they both look really good. The peppers might be looking a little better and I have one Roma tomato that I actually had to tie up, so some of them are starting to grow. The pole beans look good. I took the garlic scapes off and put some on potatoes for supper and chopped and froze the rest of them. I was shocked at the raspberries. They are huge and almost a jungle. I took all the dead stocks out early spring and thought they were not doing that well, but I think last year they did not get enough water and this year with all the rain they have just taken over. The blackberries are covered in flowers.. DS dug a hole down in the compost bin and I see where I will have a lot of compost to take out this fall. He dog a hole and then he dumped some trash barrels I had with old rabbit bedding. I put in there in the winter when I cannot get to the alley because of snow, so these have some water in the bottom and soaked rabbit droppings and straw. He covered it back up and added half done compost from another bin and now I have a compost bin cooking really good. 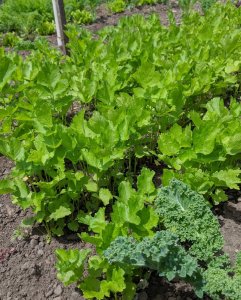 from the end of my Albion parsnip planting (with a young kale plant, for @seedcorn) I'll leave it to be clicked so that it doesn't torment Seed'

The seed was from Jung's. I don't know if that makes a difference on seed origin, since Albion is a hybrid. I wouldn't be surprised if there is only one, or just a few, places where they are grown for seed. And, that is probably true with most garden variety hybrids. Since they want cheap labor with hybridizing, lots of that work is outside of the US.

I have one "non-stealth" compost bin again this year. I've run out of room filling the ones below decks so cleaned up some bok choy plants and such and got the open bin fired up.

A lot of weeds grew in that bin this spring after I'd emptied the contents for the little veggie garden beds. Among those weeds was 2 tomato plant volunteers. Unfortunately, one was scary big. By scary, I mean it was so large that I'm afraid transplanting shock would have killed it. The other was a potato-leaf and, right now, I can't think of a potato-leaf that I have that could mature ripe tomatoes by first frost. So, they are both compost - darn it. (However, I have LOTS of tomato plants growing.)

Another thing in that bin was a Jimson weed !!! I used to have them showing up in a sunflower area in ground that I no longer have for a garden. I'd always pull them as soon as I saw them but didn't know where they came from. I don't know where this one came from in the floor of that empty bin! I never see Jimson weed growing around here.

Anyway, I cleaned up the little veggie garden and have another compost pile started .

@ninnymary ! i'm so excited! i have four more melon plants growing from the second seeding of the seeds you sent me. they are in a completely different location in another garden and i'd largely ignored that garden for weeks, but today i finally could get back to it and weed it and there they were those lovely little melon plants growing away. that brings me up to six plants. none of them look as nice as the ones you have growing but if i can get a fruit off of any of them i'll be delighted.

what is really funny (and a bit sad), is that all around them are the sprouts of malva sylvestris (High Mallow) and almost all of those sprouts were being eaten by a groundhog (pretty sure) along with the edamame soybeans that were growing so nicely. boogers ate most of the leaves off them but perhaps they'll do ok if left alone for now on (not counting on it)... soybeans were looking so nice when i checked on them last week. but those melon plants weren't touched at all. a lot of the neighboring bean plants were also ignored.

more weeding today and even able to get out for a few hours this afternoon as it was only mid-80s but the humidity wasn't too bad. tomorrow may be the only other day this week i'll be able to do that. back to the 90s and no rain in the forecast at all.

Oh that is a great find! Lol Hope that groundhog continues to leave them alone. Hey if they produce for you, save seed and maybe next year you can plant them all around that area and plant the mallow and soybeans inside there. Ok, probably wouldn't work.