we mostly don't get back jars we give away. this year we were able to borrow a few cases so that has helped but we're going to be short again in a week or two or perhaps Mom will cook a bunch up and we'll give more away. i dunno, we'll see...

i do know that we have around 200-400lbs more tomatoes in the gardens that will need something done with them eventually. we also have some finishing up on the tables in
the garage so i will have to either can those or cook them up sometime this week.

i really need to get the beans picked through today and tomorrow. i'm about 1/4 done now, but a long ways to go. Mom may help this afternoon.

Today is my day off and I planned to do a lot out in the garden. I picked green beans and tomatoes and froze the ripe tomatoes and I watered really good last night so I could pull weeds today and my neighbor came out smoking a cigarette to talk. I had to come in. The cigarette smoke is crazy.

Flowerbug, if you run out of jars you could process the tomatoes and freeze in ziplock bags. That's if you have an extra freezer.

Yes Steve, I've translated Melon Petit Gris de Rennes. Little gray melon from Rennes. I just noticed that I've always left out the word Melon! I've given seeds missing that word! It's an important one too! Yikes!, hahaha It's on the seed package by the way.

ninnymary said:
Flowerbug, if you run out of jars you could process the tomatoes and freeze in ziplock bags. That's if you have an extra freezer.

we don't have an extra freezer and the one we have is normally packed pretty full. we may just give a bunch of them away if anyone wants them. we'll see.

Placed my fall seed order today. I'll probably be planting them in a month, the heat should have broken by then. I got some compost yesterday so I can start preparing the beds. My fall bed prep is basically digging in compost and some nitrogen fertilizer. I'll get soils analysis done this winter to be ready for spring planting in March.

I tried a different process this year. First I decided what I want to plant and did some checking around as to who had the varieties I wanted. Three names kept popping up, Burpee, Johnny's, and Territorial.

Then I made a spreadsheet. I went to each seed company site, determine what variety I'd order if I got the seeds from them, and the cost of varieties in stock. I looked at how many seeds I got for that price but that was not a real criteria. I only need a fraction of what I'll get for any source so price of their smallest packet was the main criteria. In general, Burpee gives a lot more seeds per packet than the others by a large margin.

Johnny's was high price on pretty much everything, they were out of stock on several things, and their number of seeds per packet were pretty low so I discounted them. That left it between Territorial and Burpee. Based on price or preferred variety Territorial won on 7 out of 9 items. So my beets and radishes will come from Burpee and the collards, kale, chard, lettuce, mustard greens, carrots, and turnips will come from Territorial. Shipping would have been cheaper if I got them all from Territorial but I wanted the varieties Burpee had more than the ones Territorial had. Variety was the main criteria, price was a tiebreaker.

I was kind of surprised, I expected Burpee to win more, but I guess the larger number of seeds per packet may have been part of the reason for that.

shelled beans and sorted some of the beans this morning (it was raining and i needed make space in some boxes for more that would be coming in today). had brunch, went out and picked beans for the afternoon until i got tired and had two buckets full. i wasn't even planning on picking in the North garden because it was planted so late i figured none of the beans would be ready yet, but i went over to check on it and found enough beans there to fill a bucket and a half and to spend a few hours there.

even with the North garden being unfenced and open to animals bothering the bean plants it was a lot more productive planting in there than many of the gardens inside the fence, but that is the difference between having decent topsoil (brought in when they built the place) v.s. the clay subsoil which is further back where the fenced gardens are at.

must get out this next round (in a few minutes) to get the lima beans picked that are ready in the gardens inside the fence.

Ridgerunner said:
Variety was the main criteria
Click to expand...

I usually have very specific ideas on varieties that I want to grow. Sometimes, I'm way off base but initially, I have plans .

With a fairly large area to plant and a willingness to keep seed for several years, I'm willing to buy larger packets. If anything, small quantities frustrate me when they are things that I want. Buying 3 or 4 packets of something is seldom economical. Some seed companies are geared to large or small growers and some have changed over the years. It seems to me, Territorial has done that.

It was back when I decided to grow potatoes again. I already had an idea that this young seed company was kinda expensive. I looked at the seed potato prices and decided "no way!"

Ironically, I never really became a gardener willing to buy seed potatoes through the mail. However, my idea about Territorial was set for about 2 decades ... until this year. I not only couldn't continue to resist some of the offerings but the prices seemed just fine. I ordered several things and I'm happy . 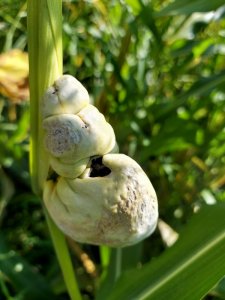