DW made catnip mice years ago.

I would have to make rats or weasels, I guess. She has small hands and enjoys challenges. the cat toys were well received.

Actually, treating it as a weed, it was a relief to have the catnip out of the yard ... altho dried and used as a tea, it's pretty good. Drying first is a requirement for my tastes.

This has been a busy week so far. Dump runs on Tuesday and today to get rid of the Mulberry branches that I didnt want to keep for firewood or kindling- too much of the stuff. So far3/4's of it is now gone or sitting in the parking area drying out.
I was going to start cutting it up but found that I had forgotten to empty out the chainsaw...and the fuel line is blocked, so its going to need to go off for a service next week when the shops are open again.
There is still alot of branches in the third chicken forage yard...but its all hung up in the trees there, so I'm waiting for it all to drop its leaves, lose some weight, while I get on with more pressing things.

The Sichuan peppercorns have been harvested and just in time too cos the next day they started splitting and spitting out their seeds. I havent found a use for these yet but certainly do not want seedlings popping up all over the place!

The 6 Tea seedlings I found have been potted up and are doing really well.

I cut out one of the zuchini's as well as one of the cucumbers and with the cucumber, I culled out some of the tendrils to lessen the amount. I only need so much. I guess I should be making pickles or chutneys with them, but I can only eat so much of that too and dont really like chutney.

I did go back to the next mowing strip in the back lawn that I had started before winter, to find the retaining board had bent and bowed, so its useless for there.
that got cut up and used in the parking area, behind my long bench seat to finish off the bed there. 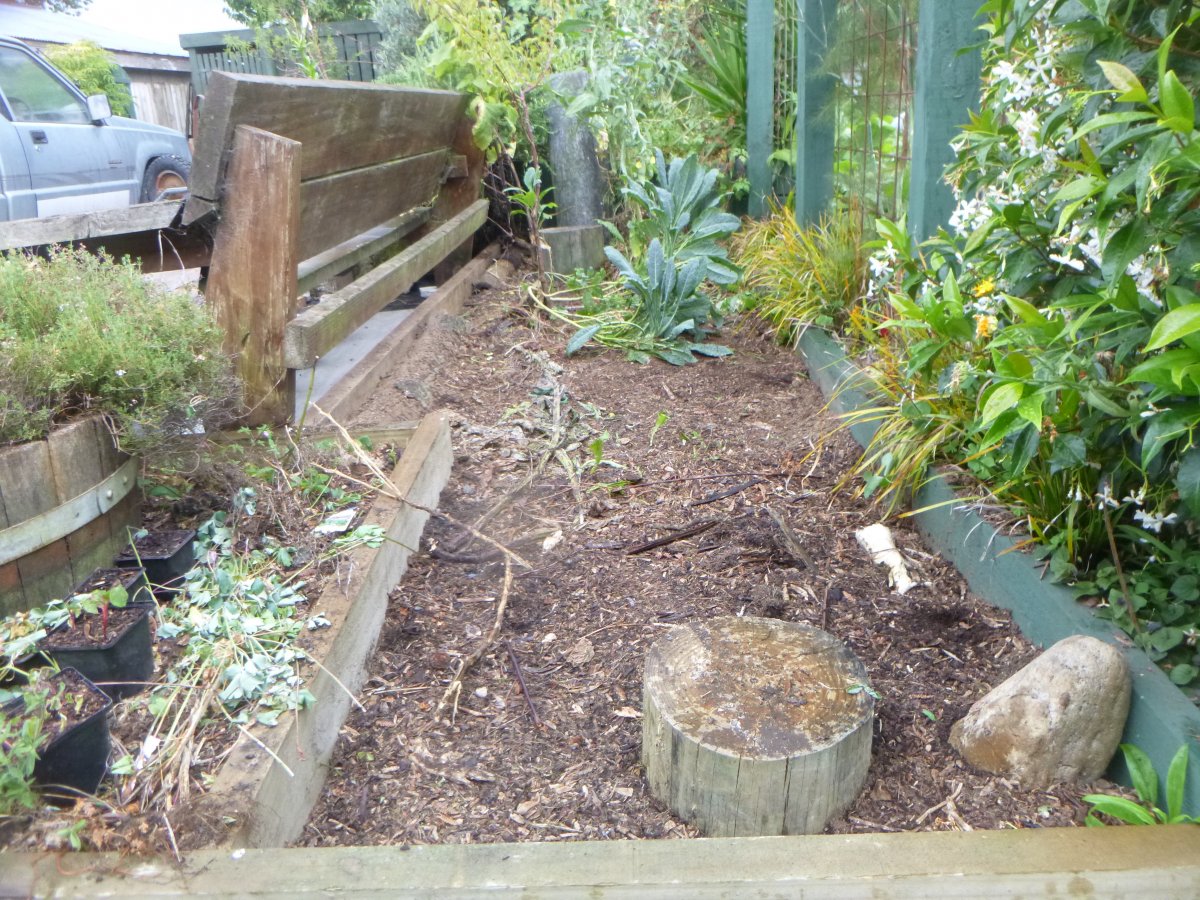 I have some wide pole offcuts that I got from work- they were putting a tall windbreak 'fence'(?) up and these were in the rubbish pile, which my boss kindly let me rummage through. I did want the foot wide ones, but they were just so heavy I couldnt even lift one end. These are for 'stepping stones' for which, I need my chainsaw working!

The other end of the board was just long enough to replace one I put in along my neighbours driveway. Now both shrubs on her side are edged, instead of just the one and it looks so much tidier now.

I planted a rising sun redbud out front. I look forward to the color. We have a ton of regular redbuds and while they grow well they are kinda trashy. I picked up the last of the leaves. I have been using them for mulch but I guess these last piles will end up in the garden. I planted a pink perfection camillia. DW is going to get a suprise flower show next winter. Thats 6 and I have 3 more in pots waiting to go in this weekend. I have them in different areas for sunshine. Time will tell what they prefer sunshine wise. Still have not cleaned out the garden. I guess that project is up next.

Hi, new to this thread! Planted some spinach and apple seeds. Then prepped the the rest of my pots for the storm coming in tonight.

Today, I planted some blueberry, rosemary and chive indoors. And added pine straw to the bed the blueberries will go in.

Artichoke Lover said:
Hi, new to this thread! Planted some spinach and apple seeds. Then prepped the the rest of my pots for the storm coming in tonight.
Click to expand...

Interesting. What do you plan to do with the apple seeds?

Zeedman said:
Interesting. What do you plan to do with the apple seeds?
Click to expand...

I’m going to attempt to start some trees for planting next fall. I know my odds of getting good tasting apples are low but I have plenty of land and will be happy even if they are only good for baking or feeding the wild animals. I’ve also planted seeds for Pawpaw and Pecan trees.
T 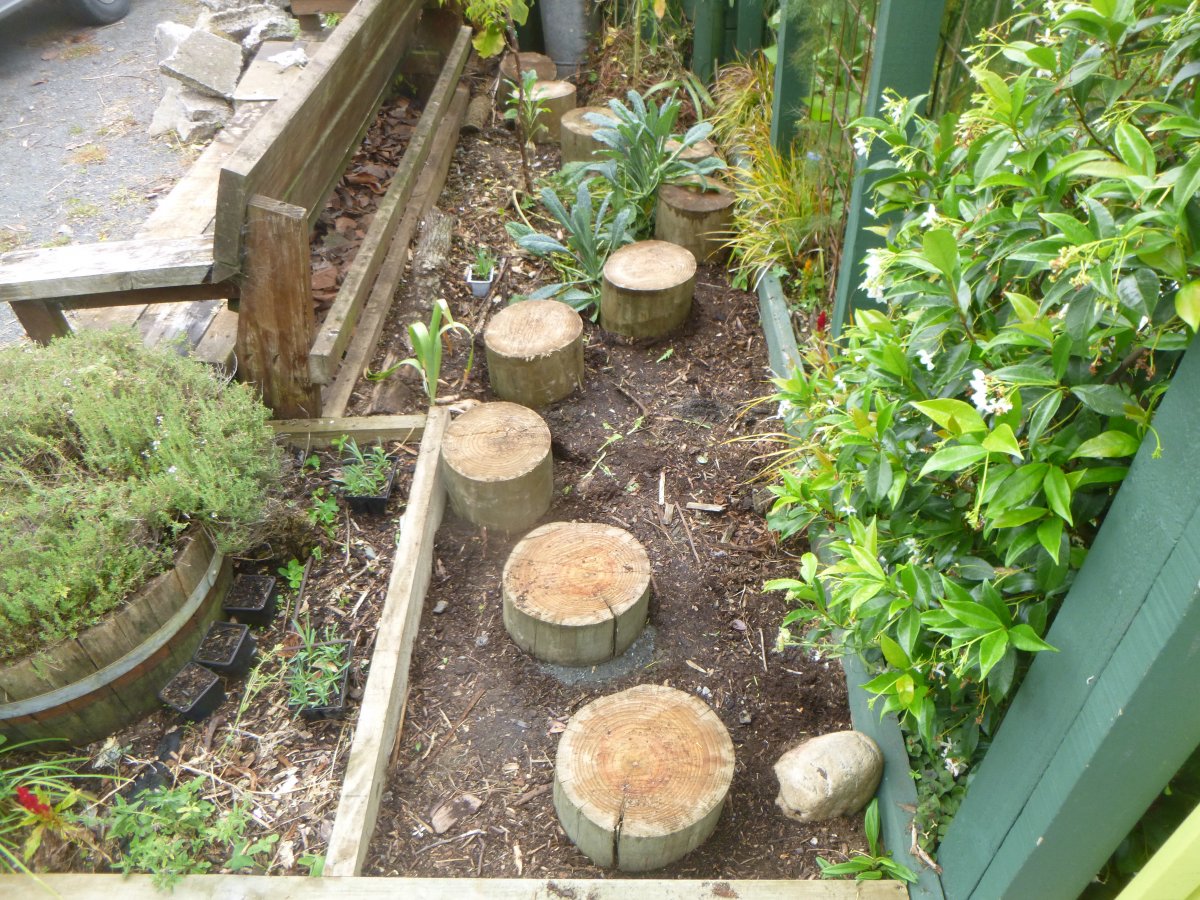 Yesterday, I started work on the next bit of mowing strip for the lawn...then it started raining.
So it was back inside.
On the way, I harvested the Jin Mat Korean Daikon (4) and made some Kim Chi with them.
So far, I like these. Smaller but fast growing, not so strong tasting. Each one was around a pound per root, so I had just enough for the recipe. 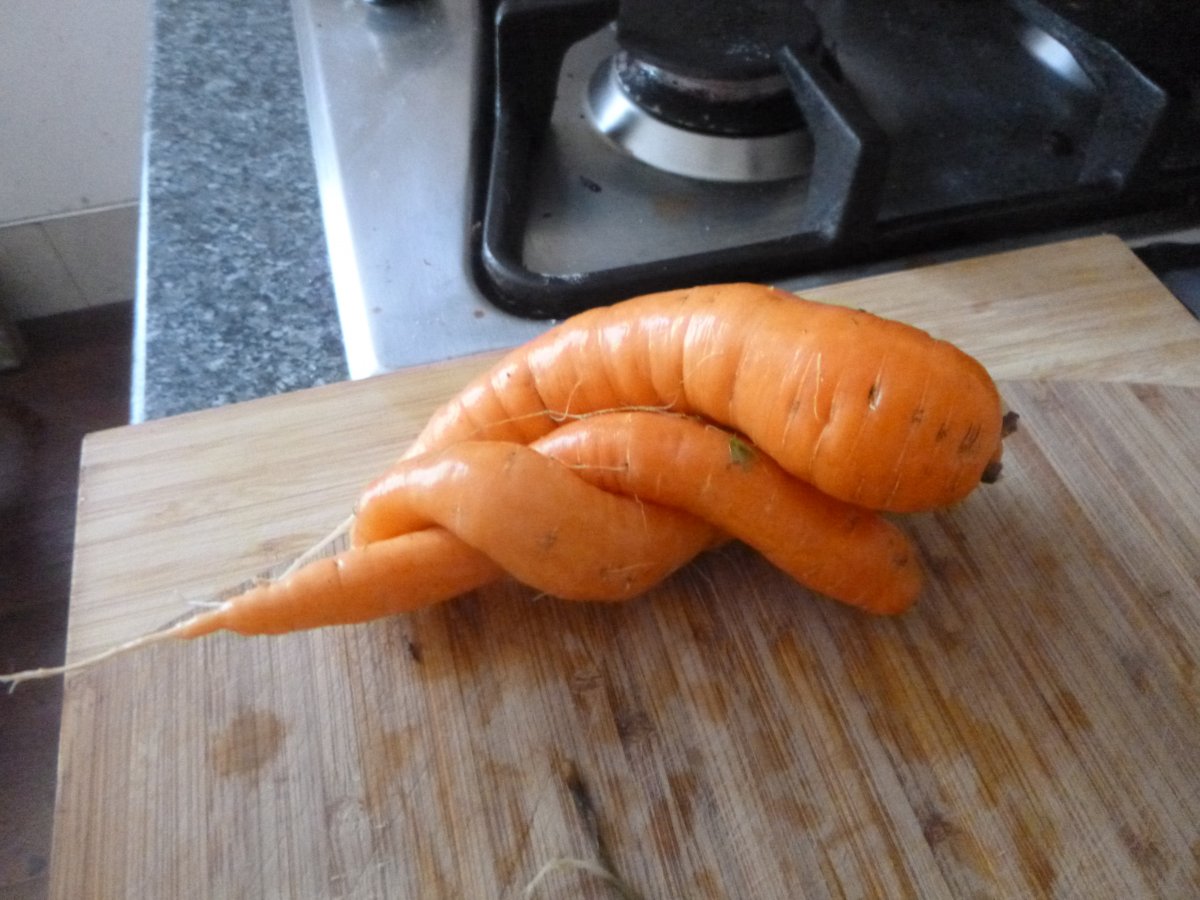 Oops, thats not the one, but really have you ever seen such a bundle of carrots! 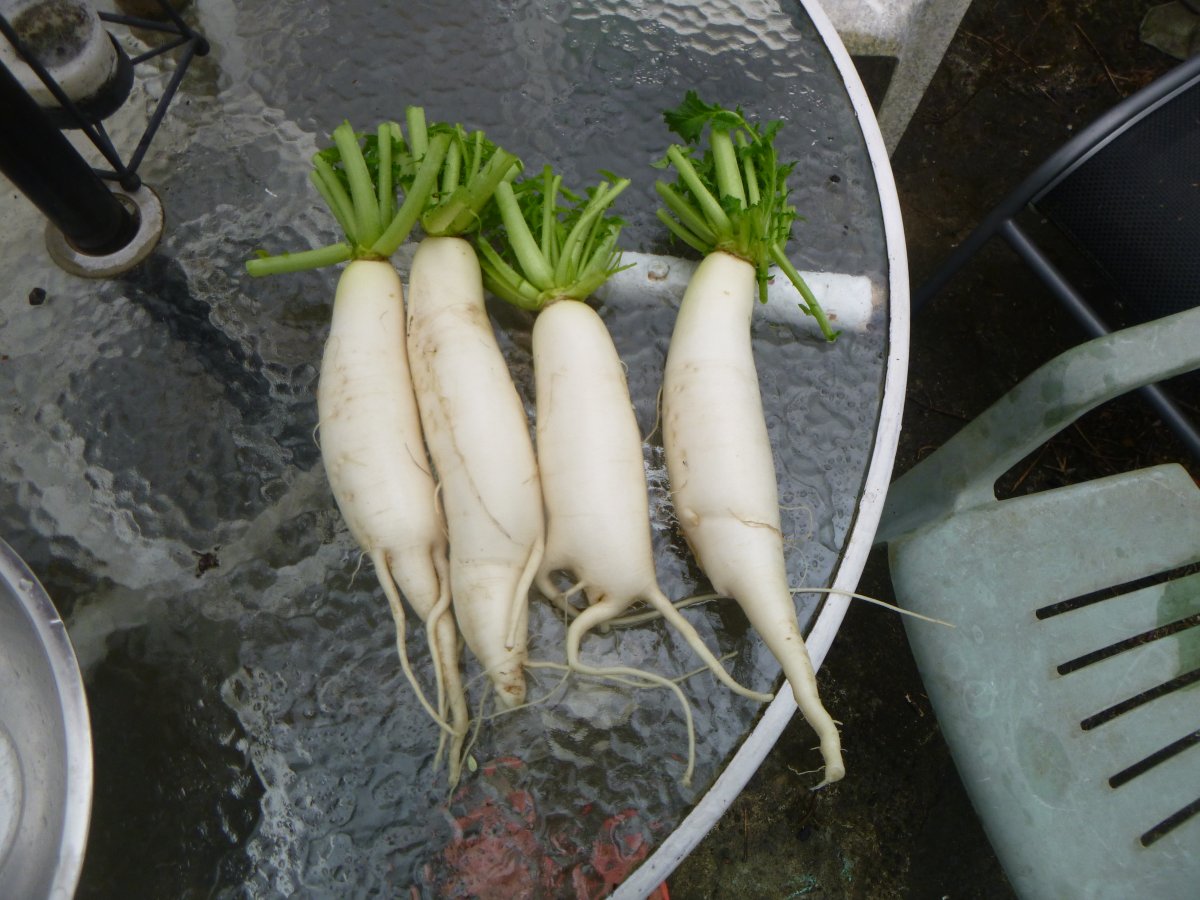 From that to this. 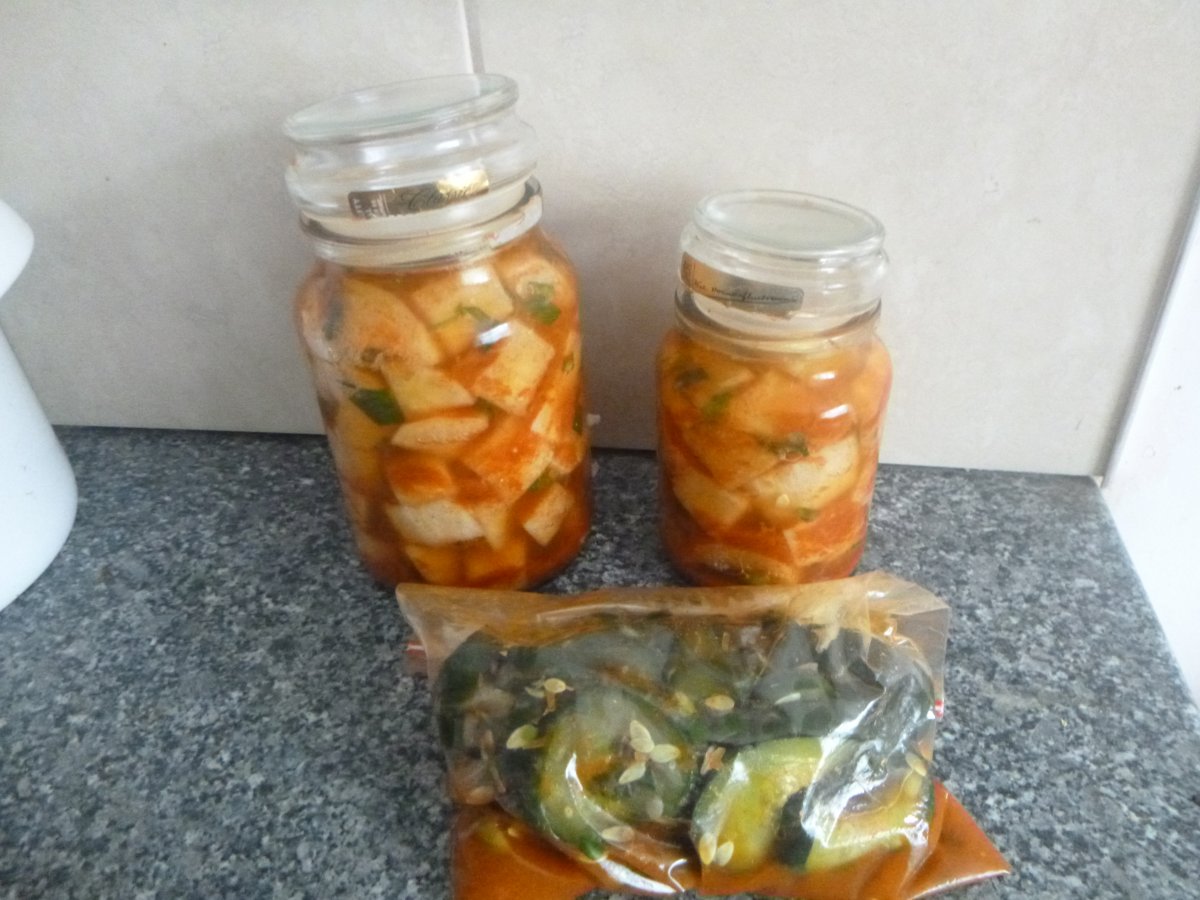 Today was about the same, I heard my neighbours son using his chainsaw at her place and popped over to ask if he could slice up my poles for the stepping stones, which he happily did.
I got them pretty much lined up...then it started to rain again.
Not too sure how the last pic wound up being the first and sorry, couldnt figure out how to put it in its right place.

I have grown diakon radish only once, @Trish Stretton . It's primary purpose was for leaf harvesting since the variety was noted for that use.

Are you making kim chi in both jars and bags? That reminds me of my "freezer sauerkraut." I am eating cabbage right into winter this year and only a little as sauerkraut - which, by the way, keeps well unfrozen in the fridge

The diakon plants produced a few leaves, little skinny roots and bolted to seeds as summer arrived. I had hoped for a longer growing period than that but that first sowing may have been too early. I did enjoy snacking on a few seed pods.

It was warm enough that the carport refrigerator could be stuffed with cabbage months ago. A few decaying leaves have been peeled off but the cabbage has stayed fresh and crisp. I've had to move them to coolers and indoors several times when temperatures dropped well below freezing because everything will freeze quickly in that refrigerator if the carport is very cold.

We can eat a lot more cabbage than sauerkraut. However, I'm having to be very conscientious about temperatures.