yup. stupid aint it? biowarfare 101. I have some powders too, Actinovate is Streptomyces from the fungal family the human antibiotic medicine streptomycin is made from. Its reeaally good for bacterial problems. When I sprayed for funguys the first time I used diluted povidone iodine and chlorothalonil which is pretty hard core but our fungi are totally delta force green beret types. 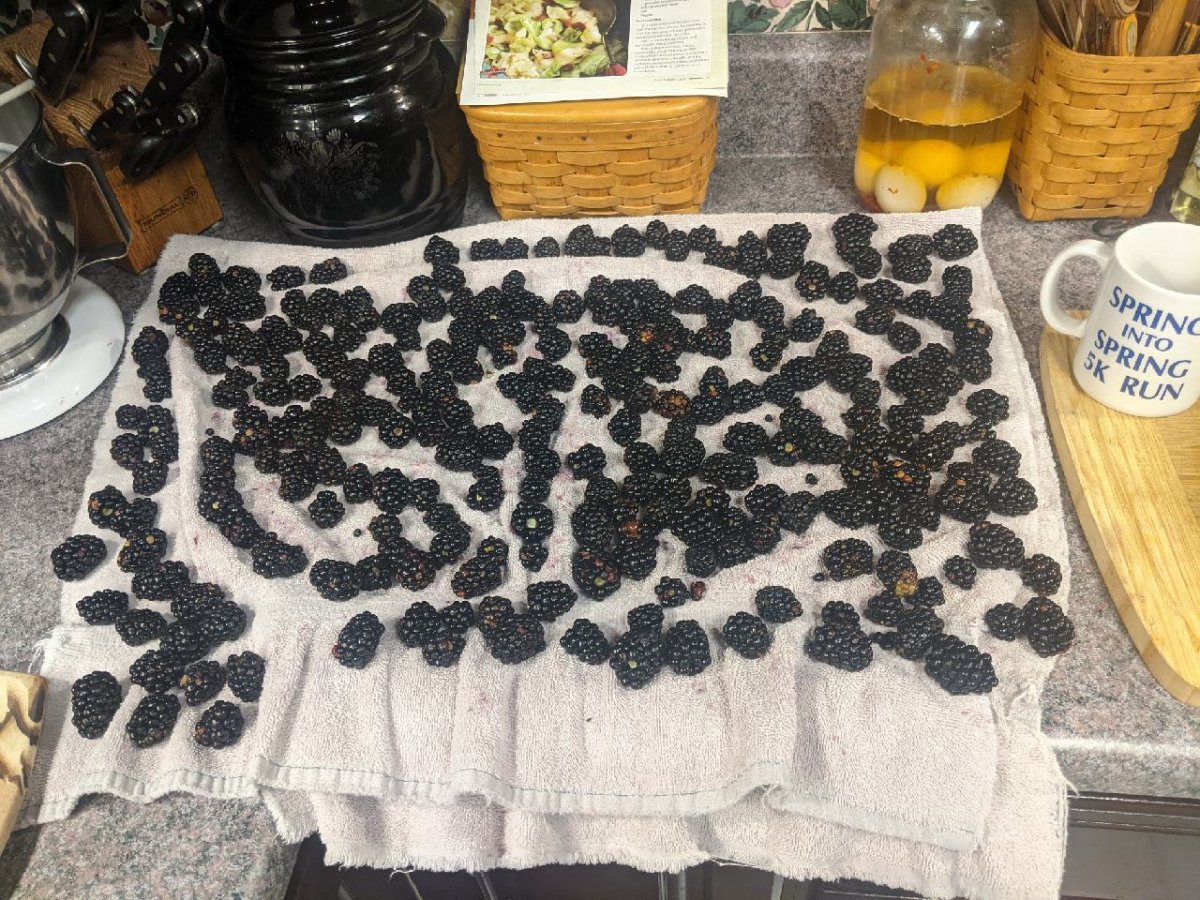 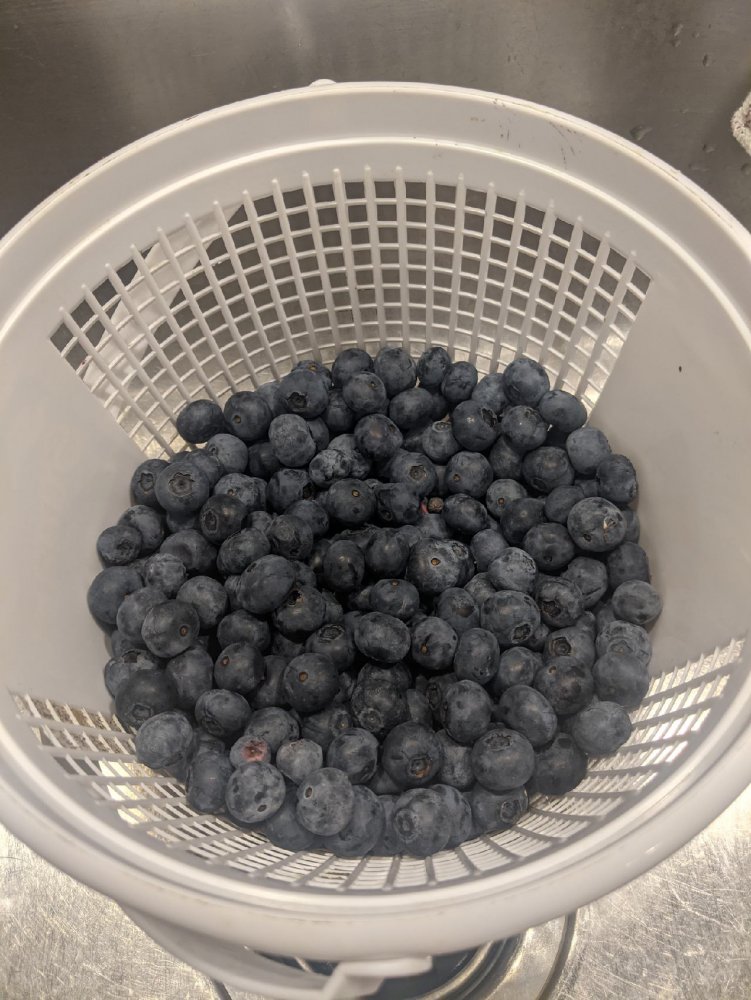 digitS' said:
It is a new season. What did you do in the garden today, yesterday, last week ?

Two backyard beds have been covered with the temporary hoop house. Seed for Asian greens and escarole has been sown; bok choy transplants have gone in. The flower beds around the house have been cleaned up.

I have now begun in the little veggie garden by leveling a few beds cultivated last year, fertilizing, and planting some seed potatoes, onion sets and pea seed.

What did you do in your gardens ?

Dirtmechanic said:
yup. stupid aint it? biowarfare 101. I have some powders too, Actinovate is Streptomyces from the fungal family the human antibiotic medicine streptomycin is made from. Its reeaally good for bacterial problems. When I sprayed for funguys the first time I used diluted povidone iodine and chlorothalonil which is pretty hard core but our fungi are totally delta force green beret types.

Those look delicious! You did a goood job growing them

Since my annual fungal wars have begun with this recent liquid generosity and summer heat arrival, today I will put out prepared Trichoderma and Bacillus Subtilus. I set out corn meal a few days ago for the Tricho, but now I will basically seed it rather than wait for Nature. Impatient gardening! The B.subtilus is a gardening product sold as a fungicide but here is some stolen text off a product selling site that explains more about why I like it also.

"
Bacillus subtilis, also known as "hay bacillus" and "grass bacillus", is a hardy species of bacteria found in soils and the gastrointestinal tract of animals like cattle, goats, deer and humans. As one of the first bacterium species to be studied extensively, it is now widely used for industrial, agricultural and fermentation processes because of its ability to tolerate extreme temperatures and low humidity. Bacillus subtilis is heavily competitive in the soil and commonly outcompetes other soil microbes making it exceptional for fungal disease control in growing media and on foliage.

Bacillus subtilis competes with other microorganisms by producing antibiotics that either kill competition or reduce their growth rate. It is reported to induce SAR (systemic acquired resistance) against bacterial pathogens, whereby the plant's defenses are triggered prior to pest incursion. Additionally, Bacillus subtilis hinders spore germination in plant pathogens and prevents pathogens from attaching to the plant. When applied to the soil, Bacillus subtilis works symbiotically with numerous beneficial bacteria to solubilize phosphorus. This makes it helpful in areas where phosphate-heavy fertilizers have traditionally been used, allowing plants to absorb what is already in the soil.
"

Weeded about 1/2 of garden. Sand is hot.... while weeding the okra, I thinned it. So painful to kill healthy plants....

I can’t get parsnips to come up in rows. Where seed fell off the plants I let go for seeds, parsnips are up......had to kill some of them as they were going to hurt my green peppers....

All the gardens were fully planted as of yesterday.

So aside from putting up a 45' string trellis (which we did just before sunset) DW & I spent the day helping one of our daughters break ground for a small garden.

Which was a MUCH bigger task than anticipated.

The garden area was only about 100 square feet of sod, which should have been quick work for the tiller. But about 40' away (on the neighbor's property) is a stand of very large poplars, whose roots ran well into her yard - and as we quickly discovered, many of those ran under the garden area. Apparently, those roots had been there for years, and had formed large knots where emerging shoots had been mowed off & re-sprouted over and over. This was too much for the tiller, so we had to go through the whole area by hand using pick hoes. While DW & the grandson pulled & raked out sod, DD & I took turns on the big pick hoe, breaking ground & pulling/cutting large roots (and a few 6-8" buried rocks). A few of those roots were 1-2" wide, and ran the length of the garden (and beyond). It took the whole hot afternoon to clear the area, by which point we were all exhausted.

Tomorrow, once we put up a fence, DD will be able to start planting.

This makes 3 of our 4 adult children starting their own vegetable gardens this year, which really warms this old gardener's heart. The last one probably won't be putting a vegetable garden in unless it includes a putting green... but has put a lot of effort into landscaping.
Last edited: Jun 13, 2021

tried to get the last bean garden weeded and planted but that didn't happen entirely, got most of it weeded and some of it planted, but a mid-afternoon nap turned into 3+hrs of well-needed rest and by the time i got back out to plant it was threatening to rain again so i got eight rows planted and that was it for the day.

this morning i'm not wasting time like i did yesterday, so getting back out there now while i can and get it finished up.
Last edited: Jun 13, 2021

The new storm system blew in around 4ishpm yesterday, 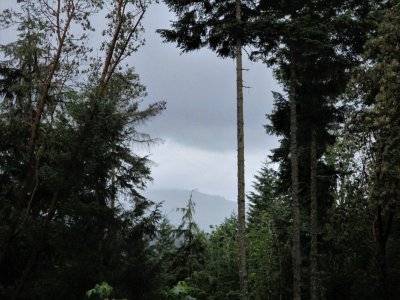 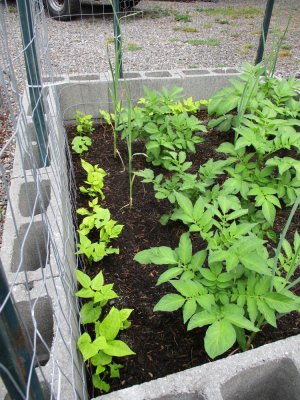 we have had too much rain for the current one to do well. So we'll see how it goes.
Enjoy your Coffee!

I have worked hard to do every thing from seed this year, I haven't bought any starts. I got all my seed from Territorial Seed, we have raised beds for the vegetables, I just cant crawl on the ground any more. I have 3 areas where I grow herbs. I have over 50 different ones, I get those from Crimson Sage in Ca. We live on a peninsula, so we have sand, sand, sand. I do do based on "beauty", just functionality, and keeping the dogs, deer and mice from eating my veggies. 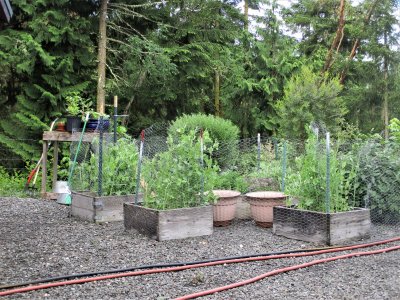 I dug out this plot and built it up for squash, the surrounding area has, fig, chicory, calendula, horehound, horseradish, elcampane, yarrow, foxglove, motherwort, apple, sunflowers - 2 slippery elm trees, hawthorn and a witch-hazel 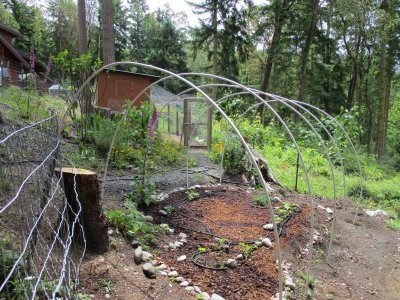 My two different tomatoes, you cant see it but dill coming up, garlic, hyssop 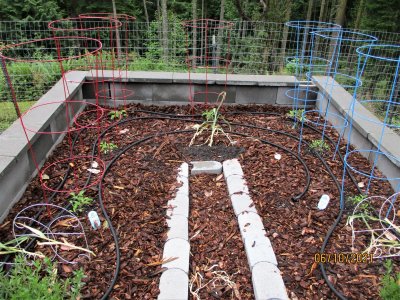 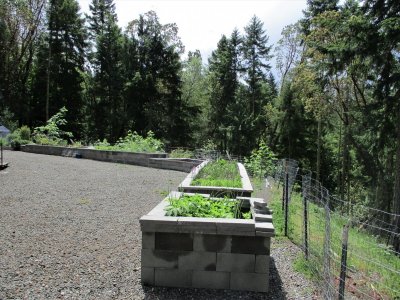 More carrots at the other end 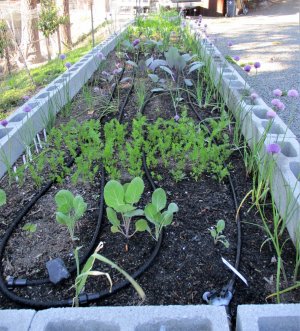 The tomato bed is in-between the two big beds
We rebuilt the asparagus bed, it has parsley and fennel in the and 3 purple brussel sprouts 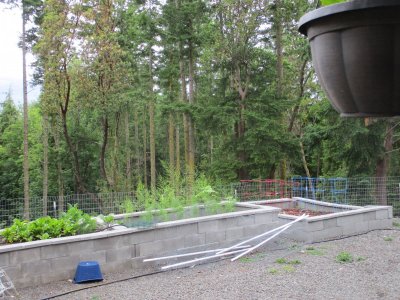 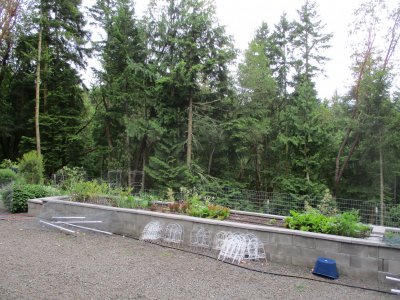 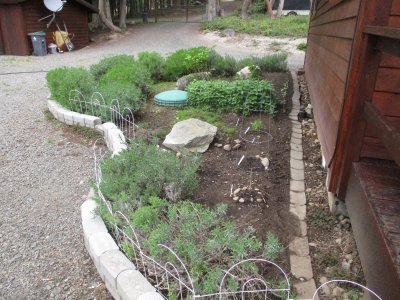 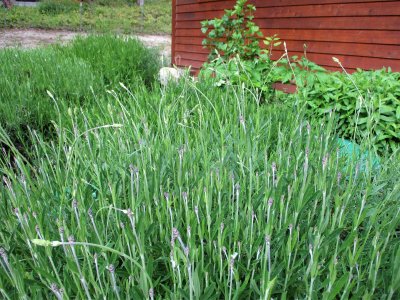 I have egg plant and jalapenos in the green house

I ran the tiller for a couple of hours. This was the 2nd go-around, 3rd if we count the tractor guy as #1. BTW, he was back and so, the (edible) weeds are knocked down in the neighbor's garden. Missed that chance.

DW collected an armful of veggies, not just weeds and a few green onions from the big veggie garden.

I found 2 potato bugs on the spuds, on last visit. Looked carefully at those and the eggplant. Could see some flea beetle damage but no potato bugs. I didn't want to spray, too sunny and hot! Don't think that I would have, no matter the weather. Peas have outgrown the flea beetle problems. Soybeans! Something dug up the sprouting soybeans!

Found hair stuck to the neighbor's tall water faucet. If I had to guess, I'd say that it looked like rodent hair. Do you suppose that one of the big Redtails or Ferruginous Hawks might have killed Benjamin Bunny or Marty Marmot and stopped on that faucet with messy feet??

Sweet corn transplants and seed for crop #3+ went in.