I have read to pinch off the first pepper flowers to force the plant to bush out. Inadvertantly, several of my peppers got pinched back this year.
I am planning to prune my tomatoes this year, like 2021, but they are still too small right now. Talk to me in August.

Think I have been attacked by predators..... this time all the seeds are coming up. Same batch of saved seed. Planted 6-10 seeds per peat pots, all are coming up very uniformly. Thinking something was eating the seed before. Now I have plants running out my ears... they are just 6-8 weeks behind.....hard to believe July is Friday.

I have NOT planted most of my okra. I STILL have 25 quarts of 2021 frozen bags!
I will plant next week. I have planted okra late before and gotten a good harvest.

watered this morning and will be mowing in a bit. usually that is enough for me and it gets hot enough by the time i'm done that i won't get anything else done today - plus i doubt my foot is going to like this. tomorrow is supposed to be hot (the hottest day of the week in the forecast) so anything i do gardening will be in the morning until i can't tolerate the heat/humidity any more. in the meanwhiles i'm sticking my nose in some books and trying to keep out of trouble. dotdotdot

Restaked blueberry bushes and added dry manure around it.
Weeded next to my tomatoes with a hand rake, then covered with straw that was on a pallet on the barn's floor NOT used last day for the horse's stalls. I have Since gotten 42 bales of straw for next winter.
Weeded and tilled in between the 1st two planted corn/bean rows. Dumped two small wheelbarrow loads from urine soaked w/manure 2 months old from the stalls, Then covered that with straw.
Tilled up and moved from a used bedding pile from last winter. I remember that I hadn't used my snowblower and needed a place to dump, which was where I used to burn weeds and scrap wood.
Moved it to the sweet potato bed and lightly tilled it in, then FINALLY planted my sweet potatoes.
(see https://www.theeasygarden.com/threads/ducks4you-for-2022.24449/page-32#post-403983 for pictures, pls.)

Preparing beds for the next crops~ 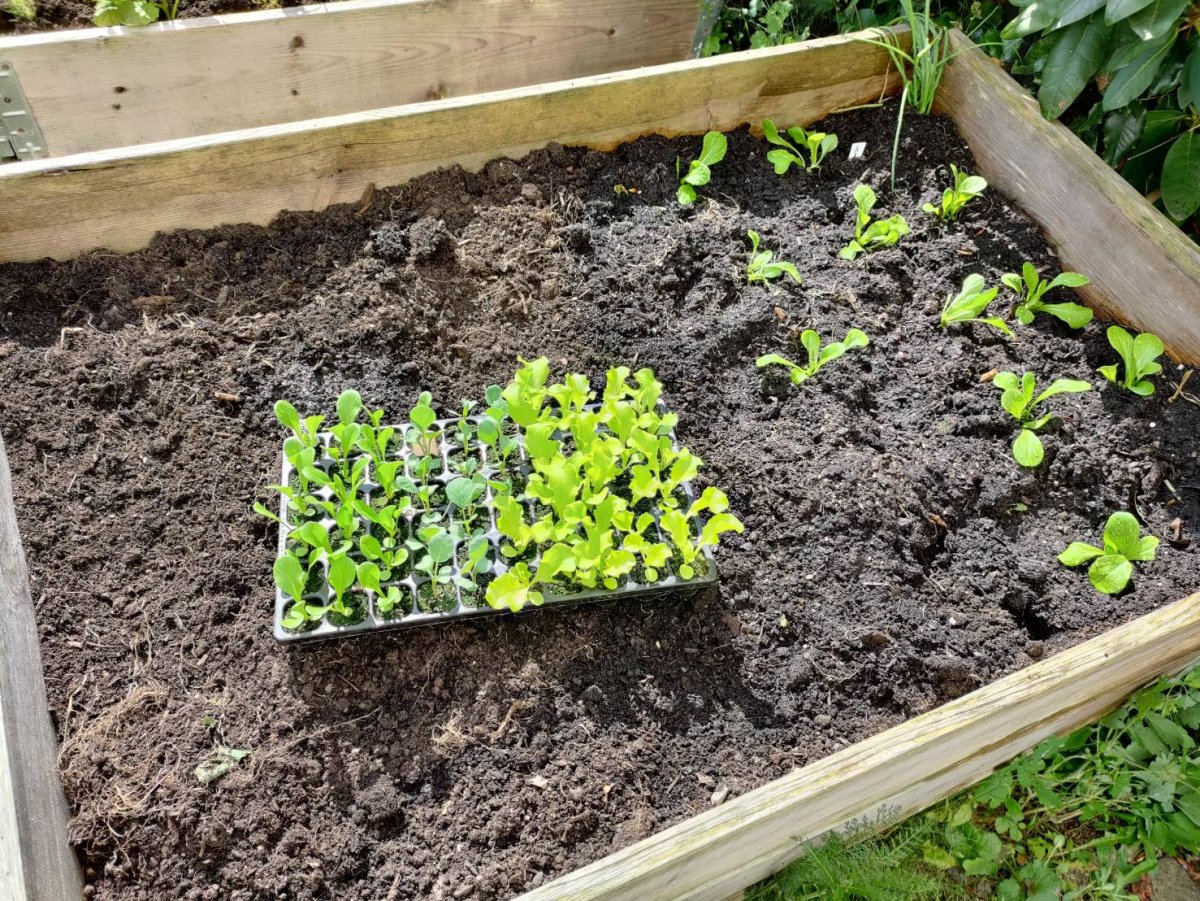 ducks4you said:
I have NOT planted most of my okra. I STILL have 25 quarts of 2021 frozen bags!
I will plant next week. I have planted okra late before and gotten a good harvest.
Click to expand...

Okra grows quickly... hopefully mine will still have time for at least a couple batches of pickles. I think it was @seedcorn that was having trouble with okra? This is a tray of okra seedlings, waiting to be transplanted; 32 peat pots, nearly 100% germination. Each cluster will be thinned to the strongest 3 plants about 7 days after transplant. 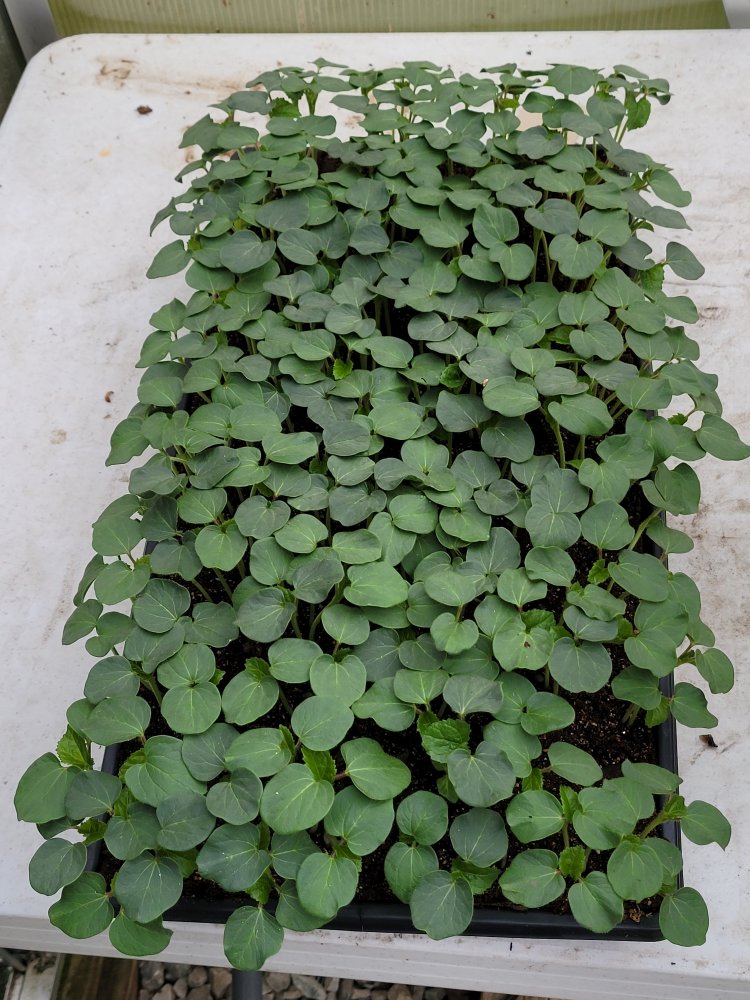 With rain expected, spent the morning in the garden putting in most of my remaining transplants. All cucurbits are in except for zucchini & the naked-seeded pumpkins, which I'm keeping in the greenhouse until I'm able to cover them immediately after planting (for protection from SVB). Almost all beans & cowpeas are in, except for one bean & one adzuki that will go in pots (ran out of time).

All direct-seeded soybeans had great germination (except for Karikachi 3, which was only about 10%) and the plants are growing quickly. The initial results for the 2 soybean rescues (Bei 77-6177 and Sapporo Midori) are encouraging, a large percentage of the sprouted seeds are emerging: 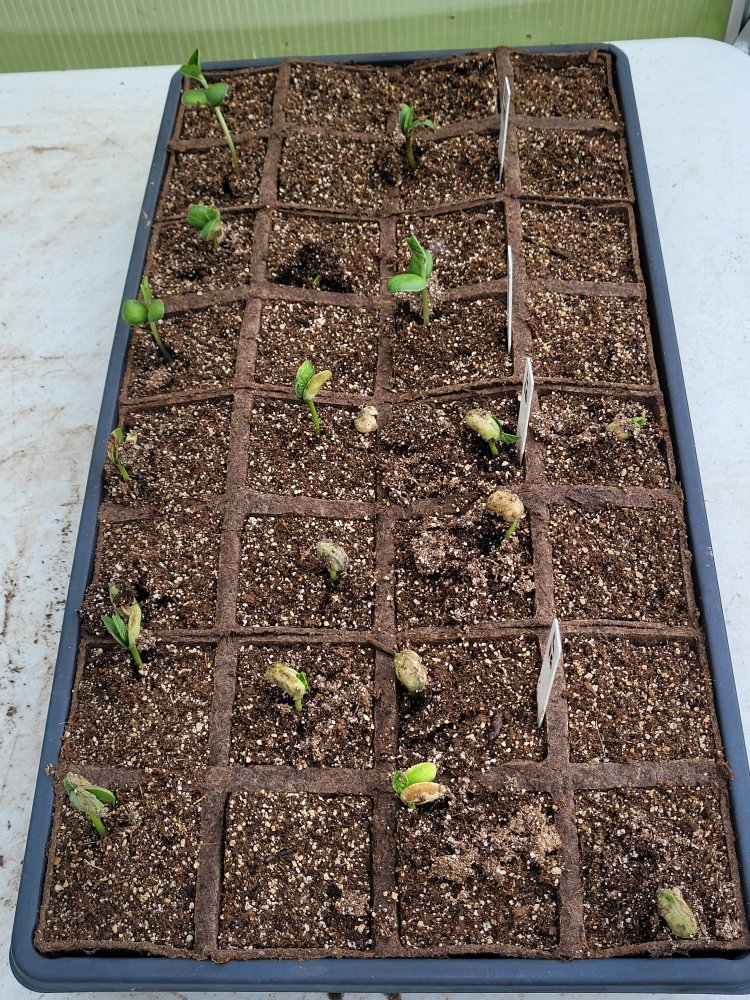 These would be enough to save both varieties, if I can get the plants to maturity... and since both are early varieties, there might still be enough time before frost. Both will be in large pots, which could be moved into the greenhouse (or indoors) if necessary.

Yes, I had many problems this year with okra. Not sure why I’ve had so many problems as last planting came up well as did the ones in planters. They are growing very slowly in the garden-too dry and hot past 2 weeks. Fertilized and watered them today plus it’s suppose to rain next 3-5 days.

Yesterday was irrigation day after a less than adequate rainfall at the distant garden.

Today was tilling for me. First, thru the squash & pumpkin. The weeds were tiny but this is likely the last time that I can use the tiller in there. Next, one of the plots of corn and the tomatoes. Lots of grass weeds in there and, hopefully, they won't be able to make it back to the surface. DW cleared weeds from near the cukes & melons and I ran the tiller on both sides of that bed, encroaching as best as I could. Along side of the lettuce, and peppers & eggplant bed was "The Return of the Thistles!" I'd already dug them out once but more showed up so they had the same treatment with the spading fork before the tiller passed thru. Lots of WORK .

One more tier went on the pea trellis for the 3rd & last. I may have to do an over-the-top board with the baling string to hold the vines when the pods begin to weight them down. That's easy. I have a hard enuf time finding pods amongst the leaves without the whole bed amounting to a pile of vines. Harvesting of any & every thing should be easy & fun! The work should have to do with caring for the plants. That's my thinking .