weeded and a little watering this morning. tomorrow morning i'll go back and water all the gardens again to keep them percolating and to get ready for hotter weather this week. the sunshine and breeze will certainly put a strain on the tomatoes if i don't keep them moist enough. 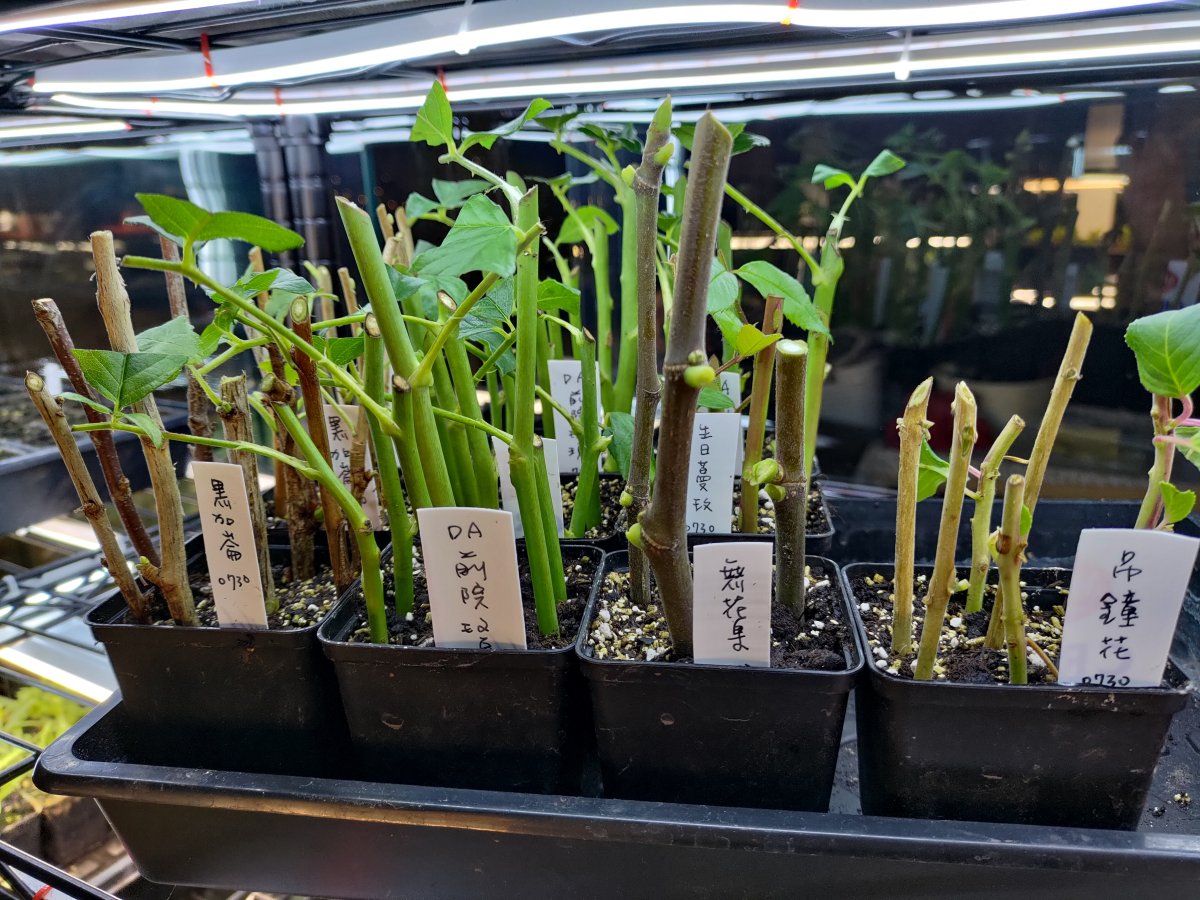 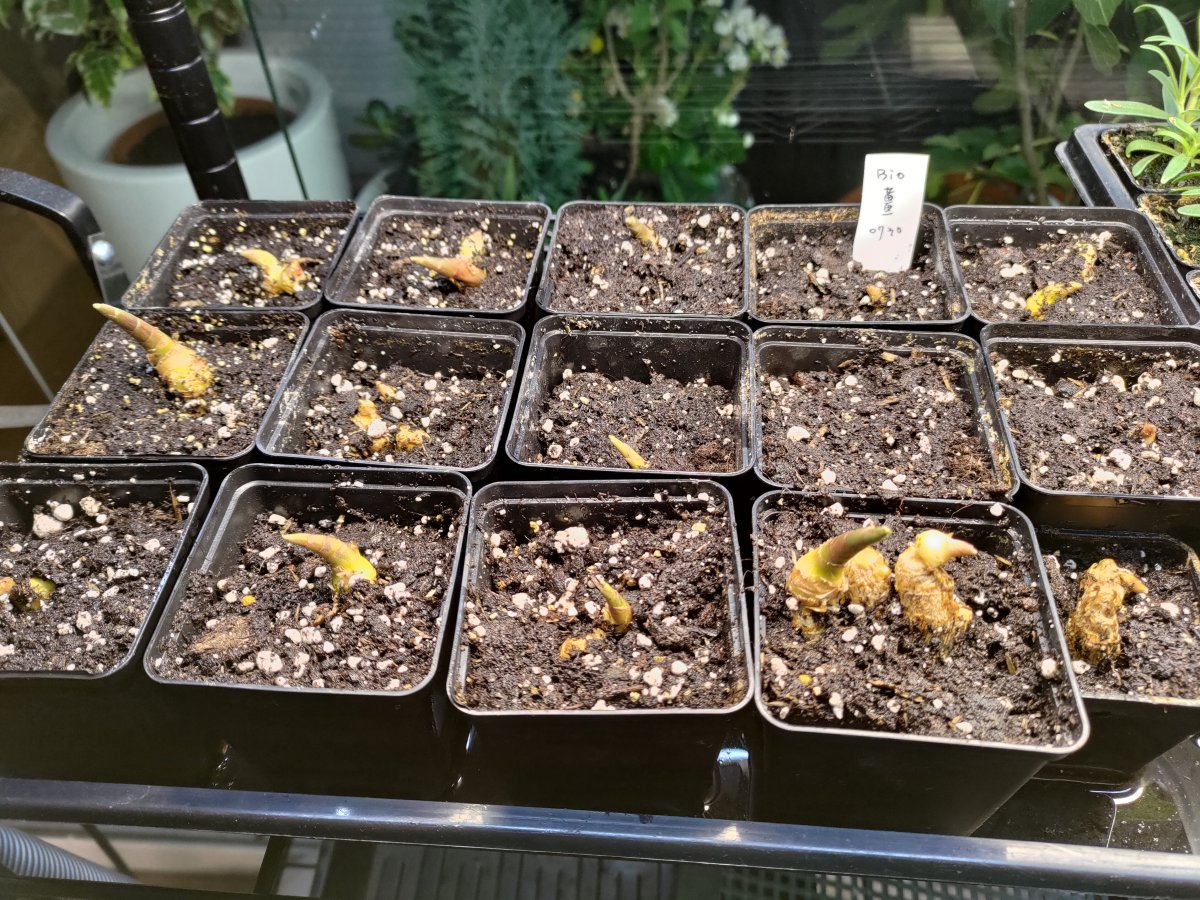 Next year, I want to harvest homegrown turmeric and ginger 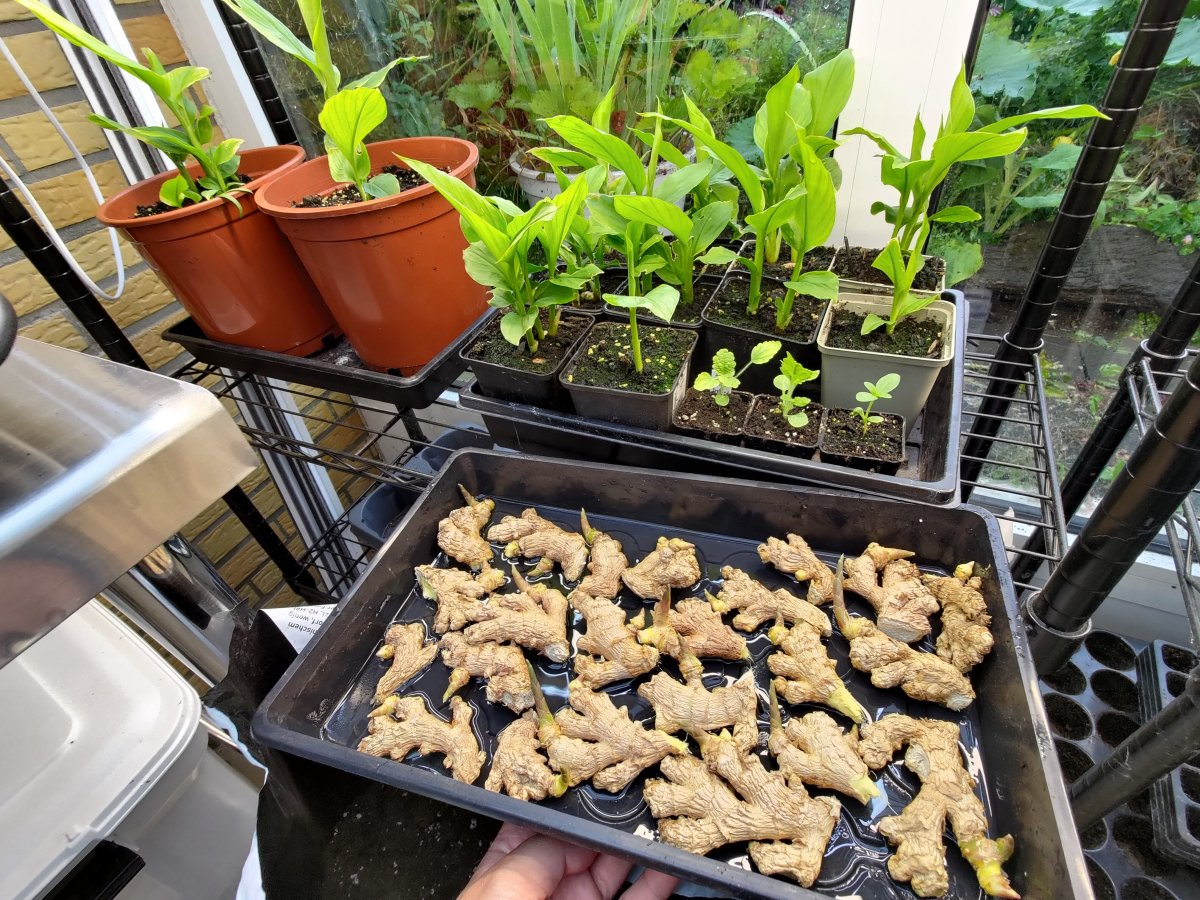 picked two tomato worms. i think i found them all. we'll see... no other signs out there.

they certainly are not easy to find you have to be patient and get out there early enough before they've gone into hiding. yesterday i could see where they were chewing but i could not find them because it was later and i needed to water.

up until this point i'd not seen signs of them, but it is kinda a jungle in there now anyways. no matter what i tell myself when i'm planting i should add four more feet between plants.

Did the tomato Hornworms have parasitic white eggs on them? I Leave those to feed the wasps to keep the Wasp population high. I see very Few hornworms on my tomatoes.

ducks4you said:
Did the tomato Hornworms have parasitic white eggs on them? I Leave those to feed the wasps to keep the Wasp population high. I see very Few hornworms on my tomatoes.
Click to expand...

i don't think i've ever seen the parasitic wasps here in any of the tomato worms - if i did see them i'd leave them alone for sure.

I transplanted the rooted side shoots from tomatoes, swiss chards, and scallions. 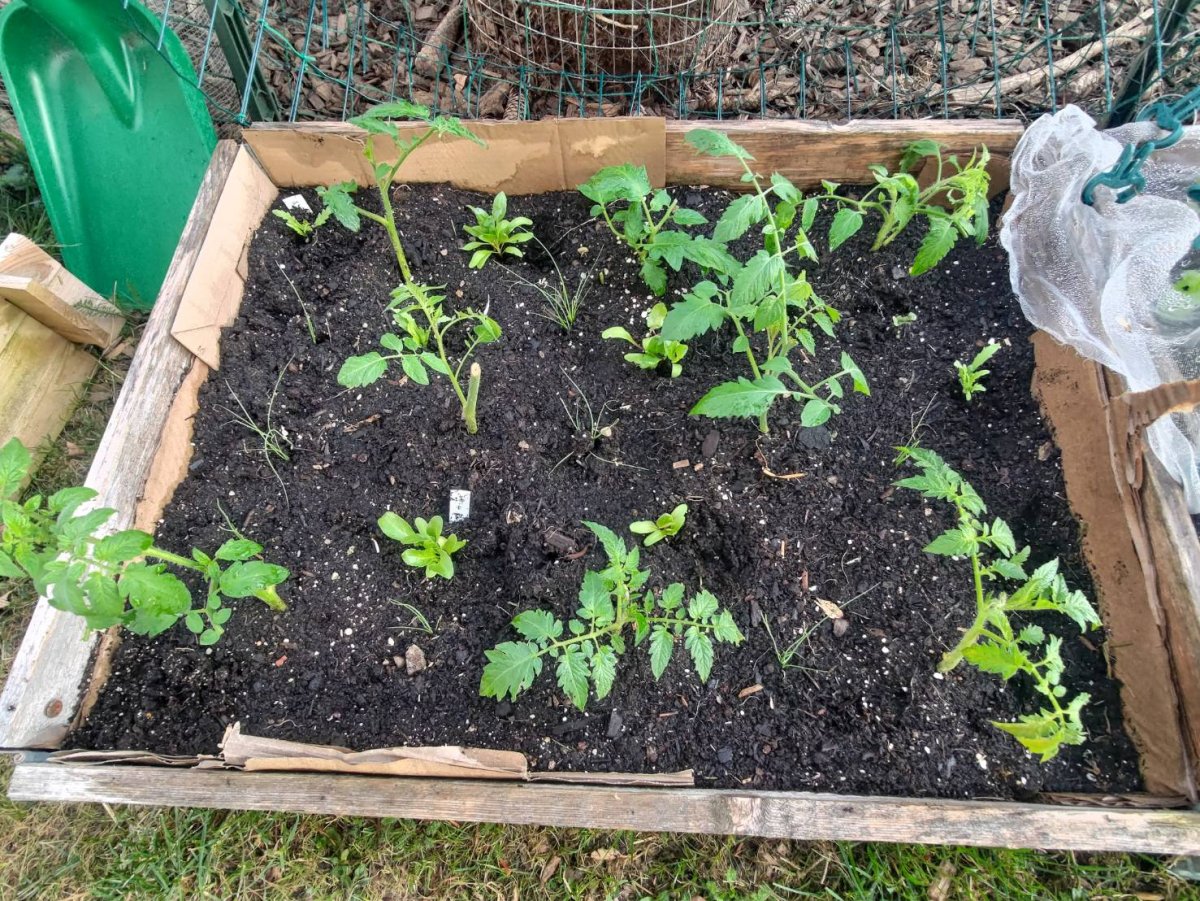 Today, I had to wait for the rain to stop, and some inside chores. I Heavily weeded the two wet beds north of the garage. I moved my rosemary out of the east bed, where the African daisys were growing over it, to a bare spot on the west bed where it will get more sun.'
Ended up pulling out a wax begonia, but I replanted it, all good.
First time I have been successful planting asslysium from seed.
My cucumber row had spots where they have grown in heavily and some bare spots. I took my hand shovel and transplanted so the growth is more even, then heavily watered them.
I also cleaned up a stall and laid it down to mulch to the north of the 4th row, the ones with the cucumbers to the north. Lots of beans up there, too.
Supposed to get More rain tonight, so I put away my "toys" so they won't get wet...like they did This morning.

I love your fresh garden flower bouquets! So pretty!!

Finally had a 'day off' from the patio build to spend some time in the garden. I pulled back the cover on the Little Greenseed pumpkins & weeded. "Beetle patrol" has started, so visited all of the soybean patches with a spray bottle of my home-made bug killer, picking off the few JB's that evaded the traps. Thus far, soybeans are acting like a JB trap crop... no beetles on the beans.

Almost everything on the trellises needed some training - including limas, yardlongs, cucumbers, bitter melon, and luffa. Cucumbers are finger-sized with a few larger, so should start picking them next week. The luffa had its first female blossom - Yeah!!!

So apparently the smooth luffa (or at least this variety) is more Northern-adapted that the angled luffa I've tried previously. This is pretty early for a gourd (the bitter melon have yet to flower) so I'm hopeful that at least a few luffa will make it to maturity; the young ones will be either given away, or used for soup. The flowers are very large & showy, I'm looking forward to seeing the plants in full bloom. 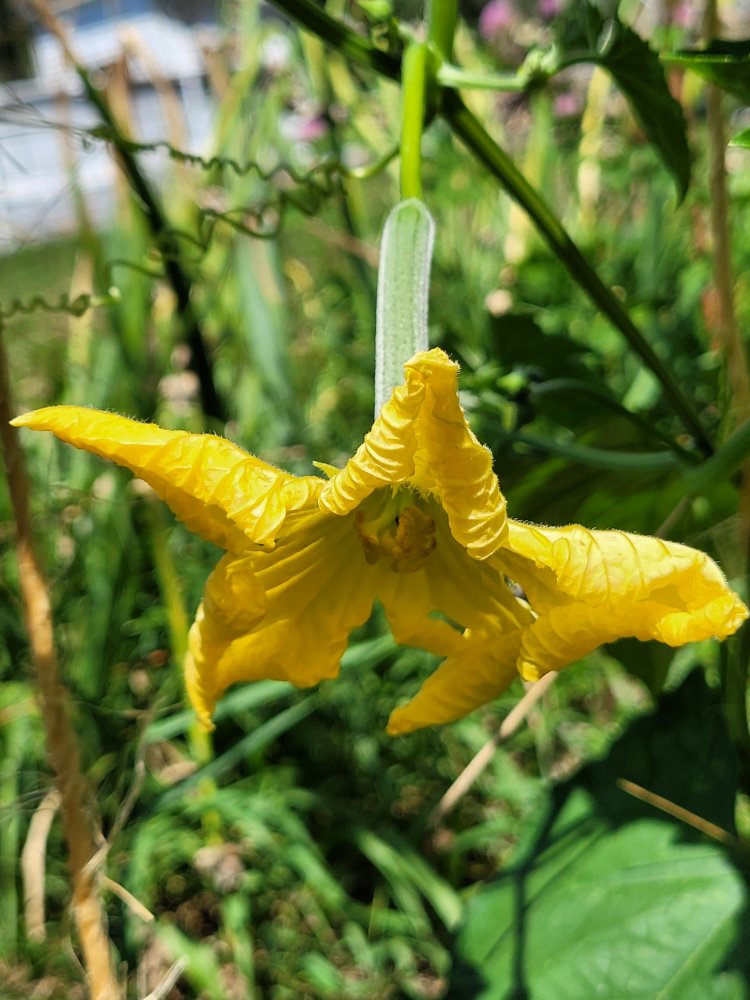 I'm having very good luck with the wind and running sprinklers at the distant garden. Of course, I'm paying attention to the hourly forecasts because that's the most windy valley location that I know of . Several years ago, I was entirely on my own out there with the property owner out of the country. However, I was using the field sprinklers then and they could darn near knock a person down with the force. Still and yet, I used to watch them throw water only about 15 feet from the pipes during windy days!

I can't tolerate that much wind with the smaller, impulse sprinklers. And these days, I have to again do it all by myself and there are miles to drive and several hours to the running of water. Yesterday, there were 30mph wind gusts after the watering was finished, even worse than Friday afternoon. Both mornings were almost quiet and the sprinklers are doing an adequate job. Nothing wilted, at least, with twice a week watering and temperatures to and above 100°f (38°C) each day.

Gotta git out there for something other than a few minutes of weeding/harvesting and then, running water. Every day until Friday (when I can run sprinklers again ) looks even more windy. I hope Friday is like that but it ain't too pleasant to be there with 25mph ++ winds. At least, it doesn't have to be an 8 hour gig so one of these quieter mornings may work out and the temperatures are suppose to be lower thru the remainder of the week.