these have markings similar to a pinto and are not what i would consider just a pink bean.

i do actually have a plain pink bean somewhere around here but they are unremarkable and i've only grown them the one time way back when i first went from a few simple varieties to adding in more (2011) wasn't impressed by them and i recall they were easily marked by any extra moisture if we had rains. they did shell very easy, to the point of excess (shatter i think that is called).

i have a lavender bean this year or what may be called light purple. some are darker than others, it may segregate into two clumps. very productive but doesn't look to be very resistant to fungi. this is the first year i've seen it so much more to go with it in terms of seeing if it is settled down already or what.

amazing to think that i've only been growing beans about 8-10yrs here and already by various methods of trading, buying, crosses and selections i have more beans to play with that would take a lifetime to figure out.

Is the Woodstock, IL address the one to send this year's seeds to?

Yes the Woodstock, Illinois address is the one you use to send this years return seeds to.

i'm glad i was able to get out and check the beans yesterday and pick some of the pods that were ready. i'm not sure the condition of most of them since i didn't shell them yet. i'm marking all of these as late season beans.

[edit: i did shell them and surprisingly most of them are in ok shape. considering the condition of the pods i was happy to see they weren't mostly moldy]

forecast this week is rain, rain and more rain.

i hope everyone is revelling in their bean shelling and enjoying all those treasures!
Last edited: Oct 23, 2017

I have a freeze forecast for Wednesday morning, not just a frost but actually below freezing. I have a couple of late ones I'm still waiting on so Tuesday afternoon I'll cut them off and hang them up-side-down in a sheltered place just to see what happens. Since they are from outcrosses I don't know what I'll be getting with them.

I'm still sorting others but getting closer to finished. With that freeze coming I have other priorities right now.

i certainly understand. we now have overnight cold temperatures forecast for the coming week so those limas are going to be done. if i can get out there and check and harvest them all that will be it for all the bean gardens for this season. sad to see them all done, but then the ground can rest up for next season.

and with my change in the garden where i grew the lima beans (inside the 8ft fenced area) this year i should have room for one or two more rows of beans next year (30-40 ft long - gotta measure it sometime) *happy dance*.

Predicted low here tonight is 33 degrees but it could easily go lower and give us a good frost.

All my common bean types are harvested and shelled. Yesterday afternoon I went out and clipped all the rest of the Lima pods. Many of them were green but starting to turn just a little, and get a little leathery. Spread them out on cardboard. It will probably take a couple of weeks for them to properly dry out. At least I saved them from an inevitable freeze.

Should finish up with all my photo taking today of all the varieties I grew this year. Probably start posting bean photos tomorrow.

Bluejay77 said:
Predicted low here tonight is 33 degrees but it could easily go lower and give us a good frost.
...
Should finish up with all my photo taking today of all the varieties I grew this year. Probably start posting bean photos tomorrow.
Click to expand...

yay! always ready for more bean pictures. i hope your season was very rewarding and that you see what you expected plus many new surprises.

i have been thinking i need to innoculate my next plantings this coming spring, and then the idea is that maybe other bean planters in your network are in the same boat (low budget, but want to give their beany babies a helping hand with their growth)? so, um, if i chip in a few $ can you get some innoculant and include a little in future bean sendings? this way we could leverage the central distribution point's access and get it out to people who need it.

from my reading i see there are general purpose innoculants now for all common bean varieties.

i know this does mean more effort on your part and i'd understand a "no" in response, but also interested in what you think.

p.s. finally caught up on all the past LEBN threads and reskimming 2017... *whew*

Some background. I got some seeds of Blue Jay beans from accompany in Canada last year to try them out for my early season bush snap beans. I was a little late in the season when I got them but when I ate some they were good. I then let them go to seed and got a lot of seed. I did not pay a lot of attention to them until I shelled them. When sorting I noticed some were solid black instead of the normal pattern. I saved some of those to plant separately this year.

I also noticed a lot of variation in other beans but didn't think anything of it. We've recently had a discussion on this thread of how much variation you can get in bean appearance out of the same pod, let alone off the same plant. I thought it was just natural variation but I did save the seeds to plant this year that looked like I thought Blue Jay was supposed to look like and put th erest in soup.

This year I did pay attention when they were growing. The blossoms were all the same, that nice bluish pink. They all made a good snap bean. They were all bush with one false alarm I'll get to later. Most plants had solid green pods. On some of those plants some, but usually not all, pods on the plant might turn solid purple just before they dried. But some plants had purple striped pods. Blue Jay is not supposed to have striped pods.

That false alarm was a pole bean growing in with the other bush beans. I cleaned the others from around it and staked it to see what it would do. From the dried bean I'm convinced it's a volunteer from another bean I grew last year in that area. That pattern is really distinctive. I had a lot of volunteer beans around the garden this year, probably due to a mild winter.

When hulling the dried beans this year I again noticed some variations. The colors are the same and maybe the pattern variation is within natural variation. But again I separated the seeds that I think look like Blue Jay for planting next year. But I also kept some that I'm calling "spotted" to plant separately just to see what they do. These may be from solid or striped pods, I did not mark the solid pods but I'll pay attention to that next year. I'll also plant some from those striped pods separately to see what happens. A bee can fly a mile form its hive looking for flowers, who knows what kind of cross-pollination may have occurred.

The first photo shows the beans I saved this year. The ones on the bottom are from the striped pods, I don't see them looking any differently from the regular beans. 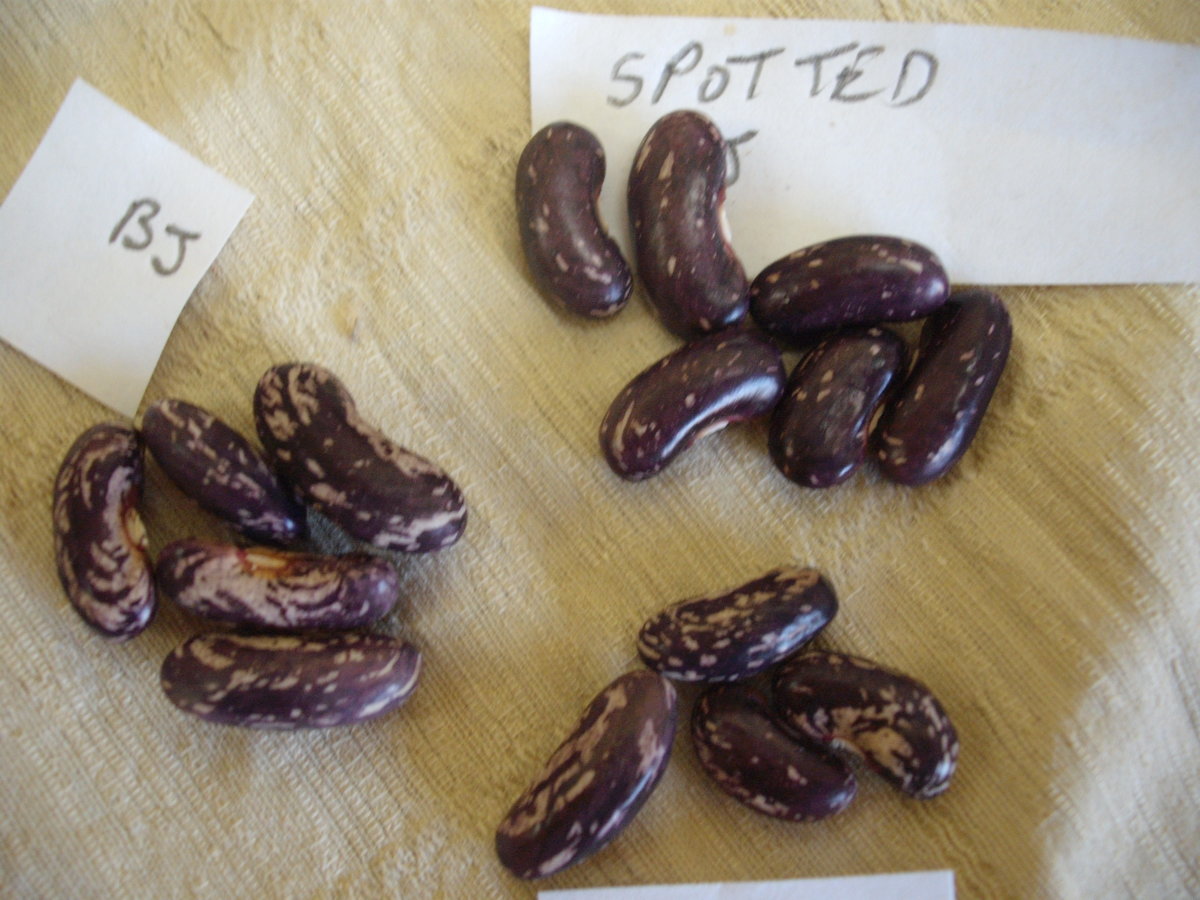 Next photo is what I think the Blue Jay should look like. 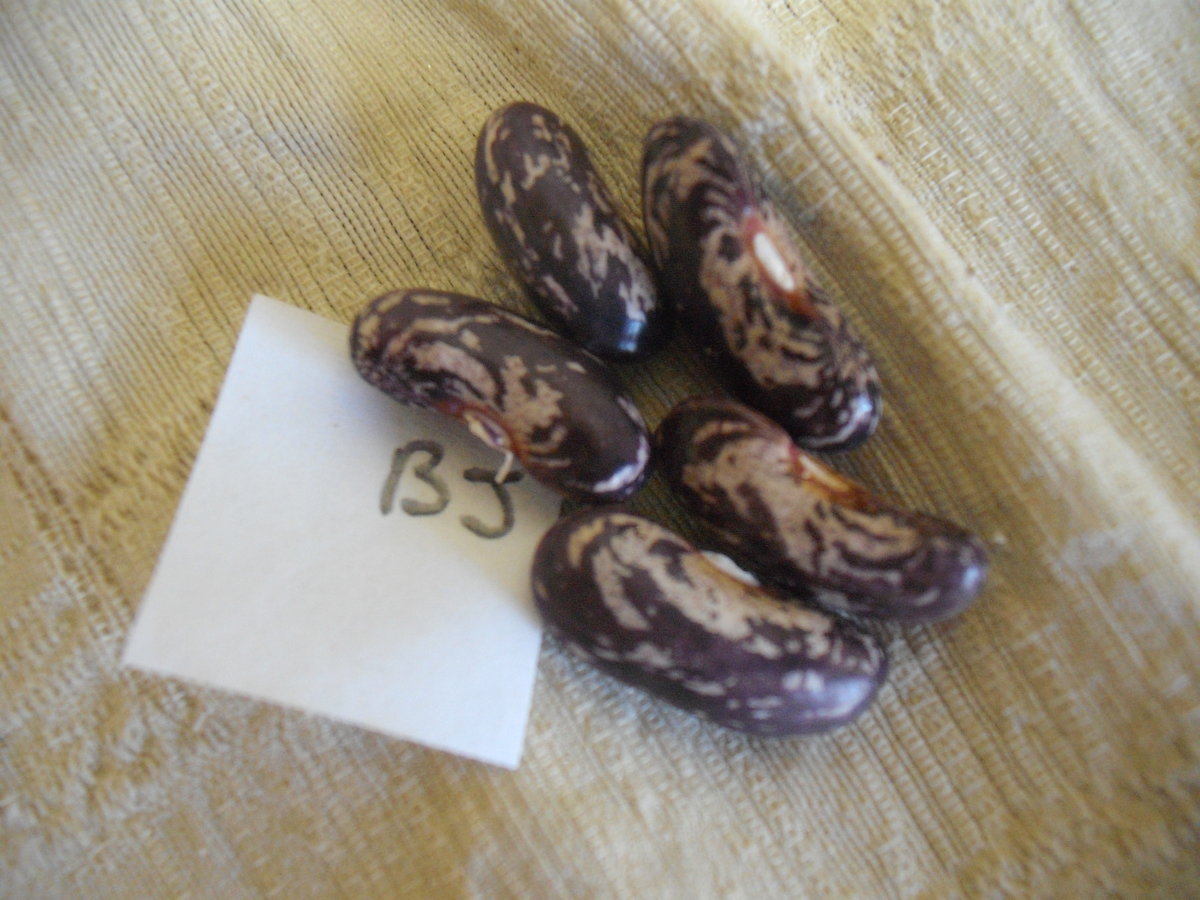 Next is the striped ones, I don't see any real difference. 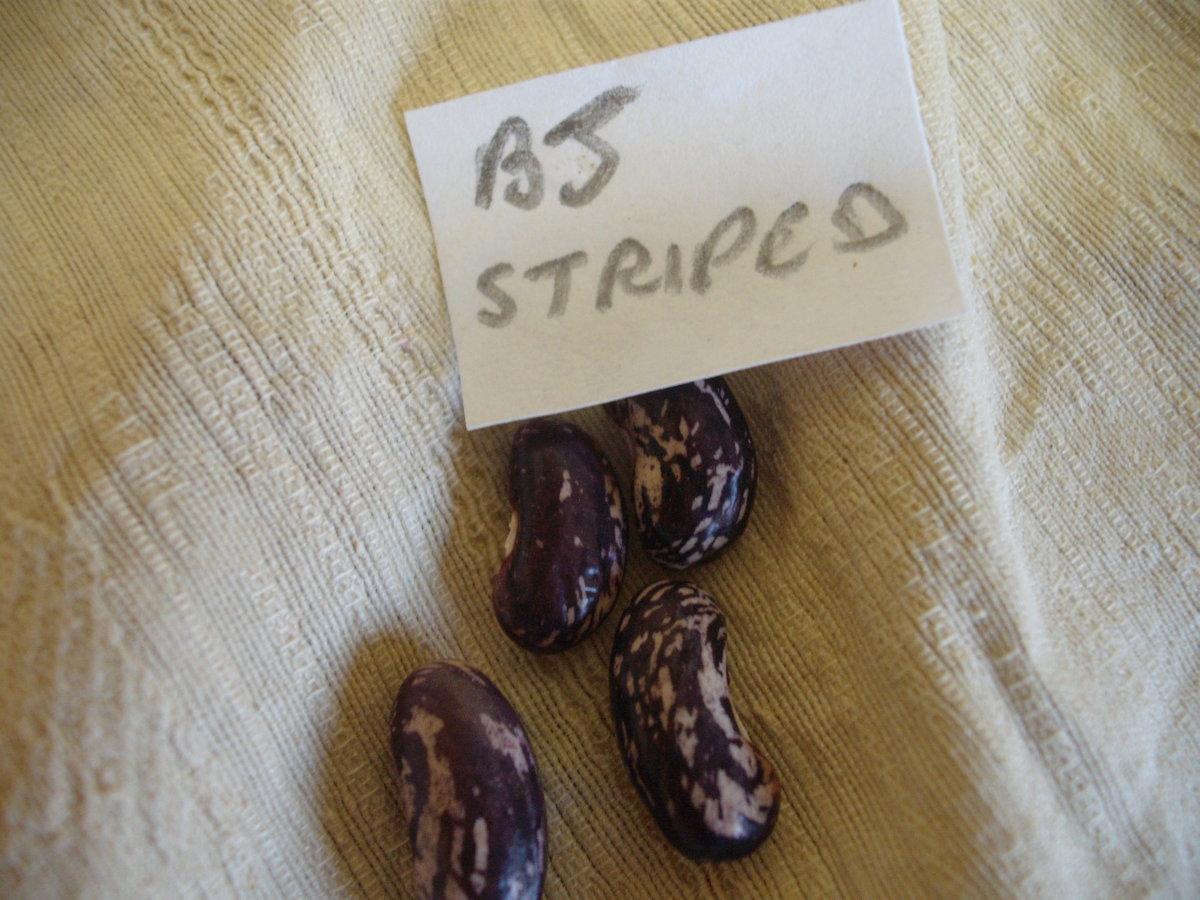 Then last is what I'm calling spotted. 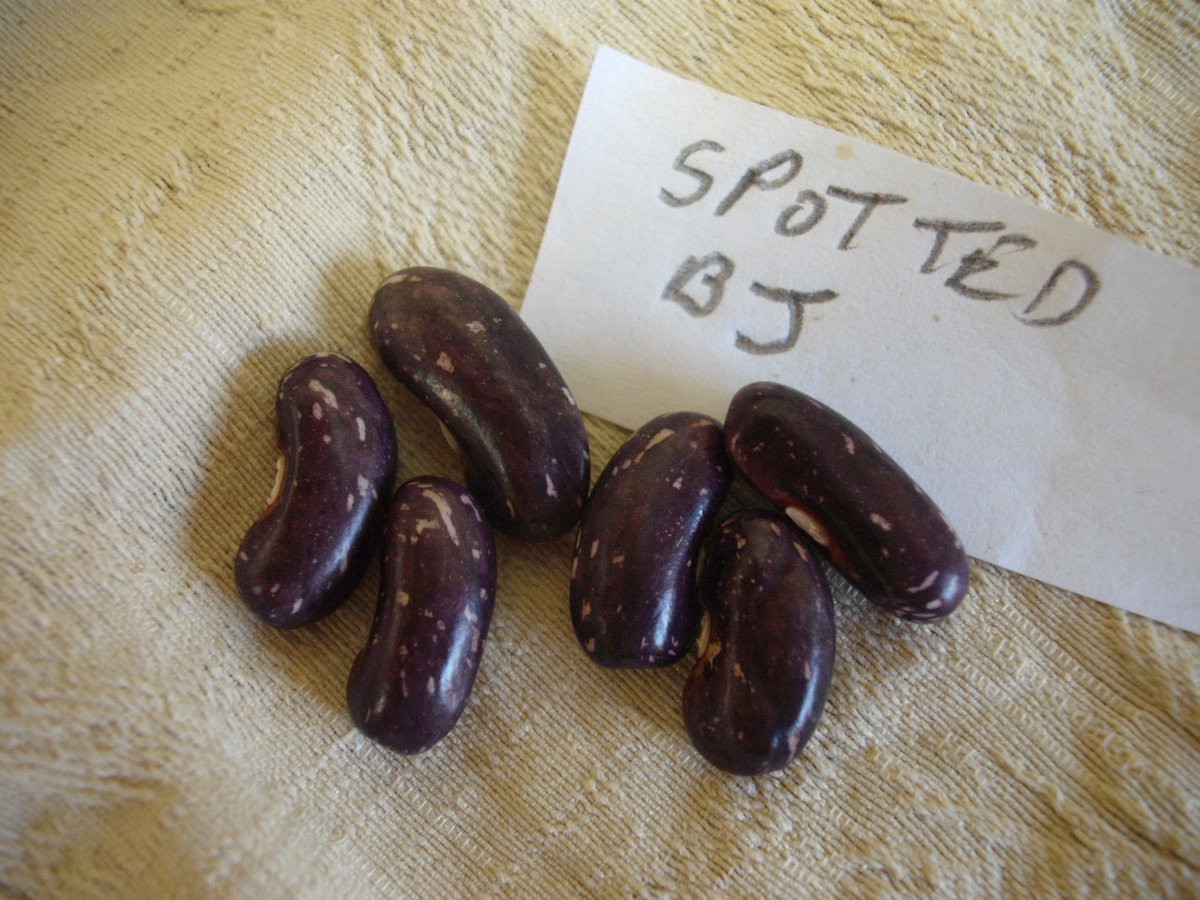 Now for those solid Black beans I saved. I expected them to be bush but no, they were all fairly vigorous pole beans. The flower was the same color as the Blue Jay beans. All the pods were solid green. I tried eating some as snap beans but they were too fibrous. Looking at them grow I could not tell any differences. All were pretty productive. I got 2,544 beans from one plant after sorting out the bad ones. The others were not nearly that productive but were still respectable. I thought they were all going to be the same bean even after I started collecting a few dried beans.

But then I started noticing differences. I'll show them grouped for an easy comparison. 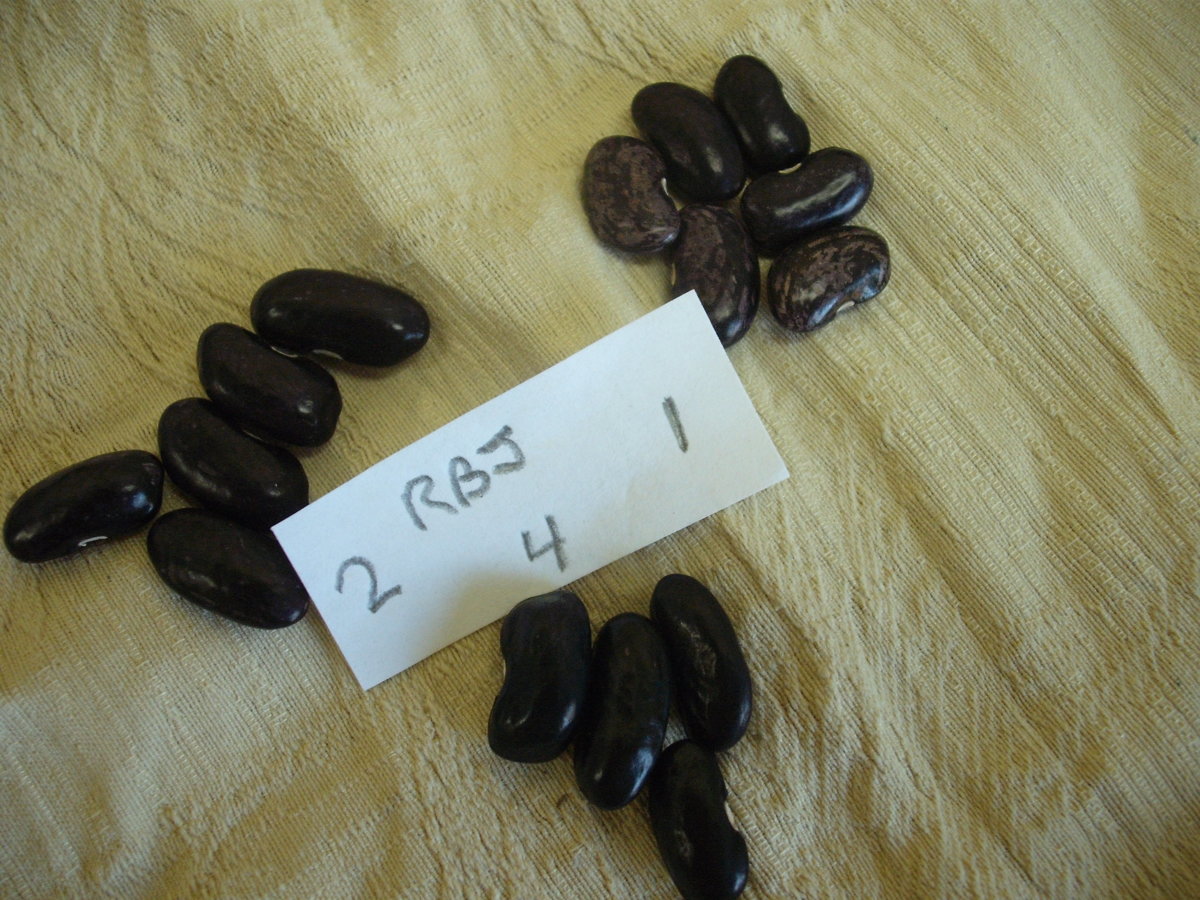 As you can see, some of the #1 had a brown pattern. The vast majority are solid black, you can't see any brown anywhere but that would be boring. If I opened the pod before the bean was totally dry I would often see some brown in it, but most dried solid black. Still I'll save and plant the ones with a visible pattern, they might be more fun. I'm going to call this one "Ausmus Holler". That's a holler (hollow) near where my parents were raised an is named after one of my great grandparents. 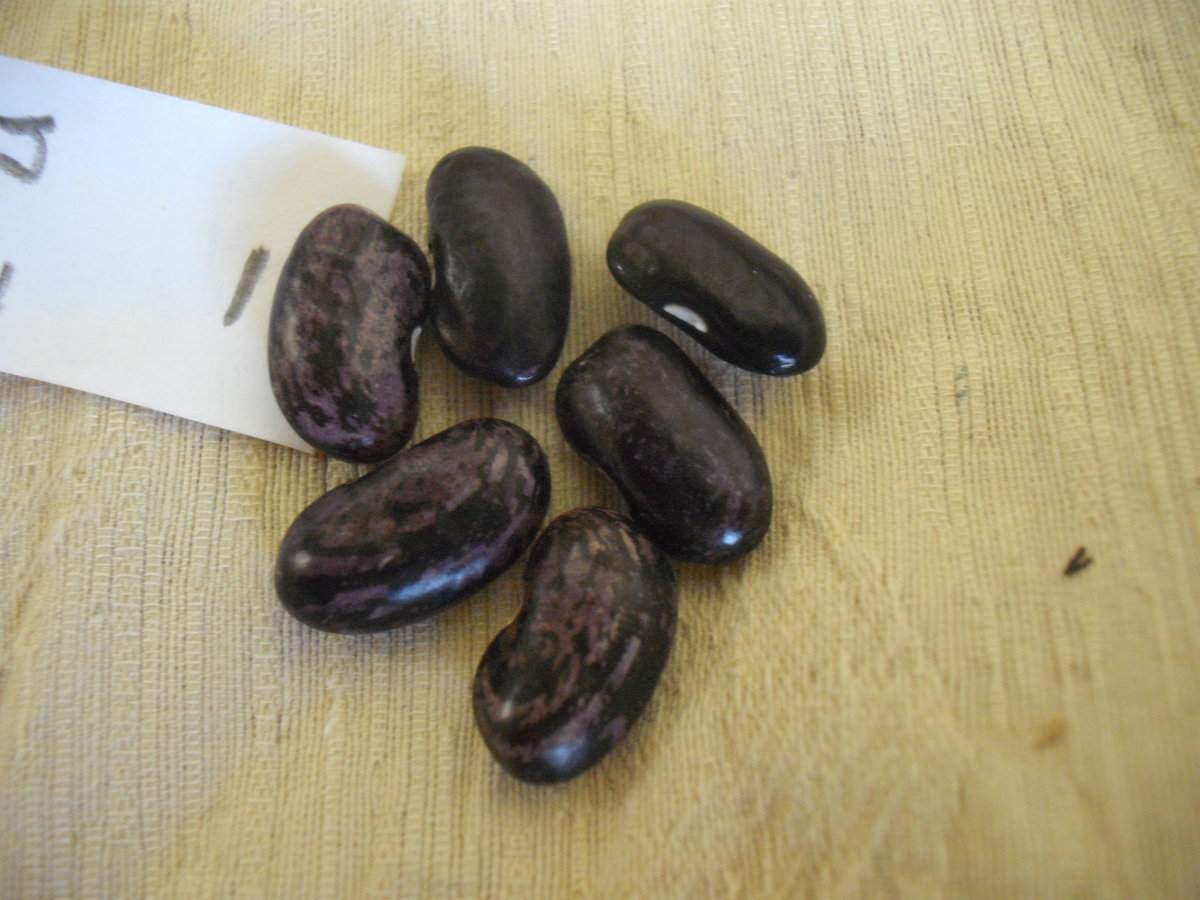 The next one , #2, looks pure black. If you open a pod before it totally dries out you can see a definite purple hue. On a few of them even after they dry out you can see a hint of purple, though most are just black. I photographed this one with them in glass jar with a flash and the purple really shows up. This is the one that had 2,544 beans on one plant. Because of that purple and that magical productivity I've decided to call these Voodoo.

Then the #4 (#3 did not make it). These are black. If you open the pod early, they are black. No hidden patterns and no mysterious colors, just basic black. I've decided to call them "Midnight at the Oasis". I happened to hear that Maria Muldaur song recently and thought it would make a decent name. 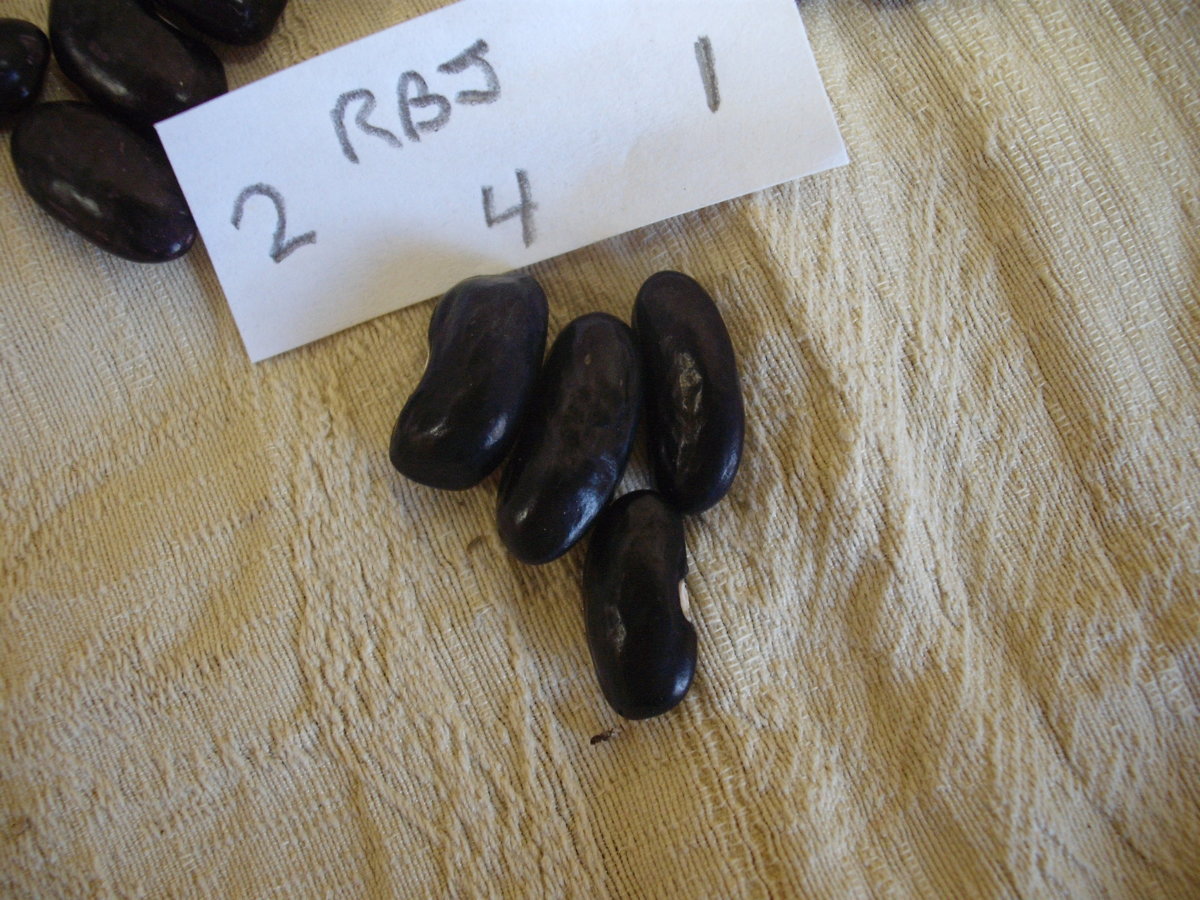 Russ, it will be a while but I intend to send you some seeds of all three of these. I still have some sorting of the others to do but that's almost finished. But I haven't even started naming the ones looking for a name. A lot of my others are repeats so I won't be sending any of those to you, but I will have a few new ones.