Tricia77 said:
... The first set of pictures are of the Robert Lobitz's varieties I grew this year.
Click to expand...

all the little lovelies! t.y. for the pictures

i've been burying bean pods from shelling in my strawberry patch that i'm working on. with the recent rains and warm weather i have tons of bean sprouts coming up!

interesting... i've never knowingly first planted yellow bird but i got 'em. i have planted them since they've shown up.
Last edited: Oct 20, 2017

Those are all so beautiful, @Tricia77 !

my question about the scarlet runner tubers is somewhat answered. the other day when i was digging and cleaning up the garden along that fence where i had them a few of the vines were finished so i tried to examine the root structure of the plant. i didn't find anything that looked like a tuber.

but i could not dig around too much in that location to be sure i got the whole root maybe there were off to the side? not sure, but my guess is that they just don't have a long enough season here.

this year i direct seeded them, my previous planting a few years ago was a potted transplant (from the greenhouse where we get our other starts).

oh, and as a side note, the seeds planted this year were all the regular black and pinkish mottled sort. as of yet, i've not noticed anything too strange but maybe one seed is "odd" or perhaps it is just immature and will dry out differently. when i harvested seeds of the scarlet runner from the first season i planted them i had mixed in some solid black seeds - i've not planted any of those yet. my guess is that they potted a blend of seeds.
Last edited: Oct 20, 2017

@flowerbug this is year 8? 9? that I have grown scarlet runners. Started with 10 beans and by year 3 was getting "strange" beans and they just keep coming! I have grown Kentucky Wonder pole beans at the same time and they were over 30' away but that doesn't mean the bees didn't do some cross breeding for me. I should have separated the colors for growout but never thought of it until I joined TEG this spring. Now I will.
When I first got them I did a lot of googling on them and knew the roots were edible but never thought about it much as I only grow them for an ornamental. In my zone the roots will sometimes get about as big around as my little finger and a good 10" long. I never have been able to find out how to cook them but I don't think these "fingerlings" are big enuff to mess with. If grown in a pot they can be overwintered, that would get the root size up!

I'm not ready yet, I still need to do some sorting and a lot of photography, but I'll devote at least one post and probably two to my experiences and plans with a certain variety of bean I got from Canada. Yes, they had a legal export license. I've learned to ask before I order seeds from out of country. I think I'm just getting started with trying to sort things out. I never would have thought about it if Russ hadn't started these threads on here. Yes. Russ, it's those Blue Jays.

As soon as I hit the submit button it came to me I had already shown my odd ball grow out in a previous thread, nothing like being repetitive

@Ridgerunner I bought my Blue Jay seed from Two Wings Farm here on Vancouver Island, it is no longer in business but I bought some nice seed from them. I think I know the Canadian seed company you are referring to, it's one back east. I have also ordered from them with good results.
Blue Jay is a really nice bush bean, haven't grown it recently but the first thing I noticed about this one was the flower, such a pretty color, the color of the seed was pretty too. 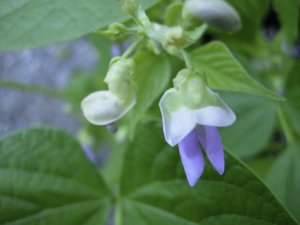 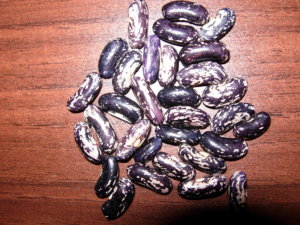 Not the best pictures but still, not only is it a good tasting bean it's pretty as well.

@aftermidnight there's always something lovely to me in any shade of purple or blue flower.

no worries i'm a patient fellow, but always love to see pictures of the beanos.

ok, i didn't have a good day today in getting done what i wanted, but that meant i had a few minutes to try to get some pictures of the two new arrivals/selections/crosses/whatever you might want to call them and post them to the website [see footnote]

Red Goats Eye (have to look at this one closely
to see it).

[footnote]
as usual these are thumbnail links if you want to see higher resolution images you have to visit the webpage where i put my bean pics - the actual formula for getting to them directly is to adjust the path without the thm subdirectory and adjust the filename to not include the _thm part.
Last edited: Oct 20, 2017

@LocoYokel, this is only the second time i have grown the scarlet runners and this time was from direct sown seed. the first time i grew them was from a potted plant. i'm sure there was a large difference in production, but i'm not growing these mainly for food anyways so it isn't a large issue to me.

the flowers are so beautiful!

@flowerbug , there's something to say about pink seed too, I got this pink seed in trade, it turned out to be a wax pole bean. This picture doesn't really show how pink it really is but it is the only really pink seed I've had...'Grandpa Gerono's' 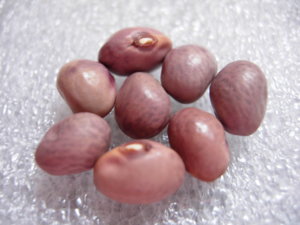 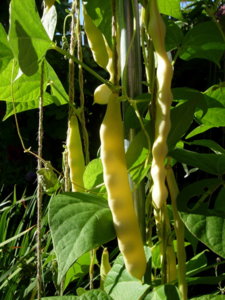 Pretty good wax bean as I remember but I was a little disappointed when I harvested the dried pods, just developed streaks before they dried down. The fresh seed was a beige color. Due to different soil, growing conditions or temperature? 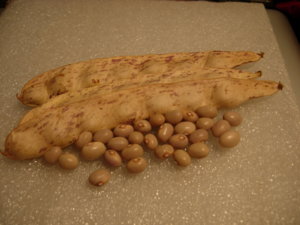