In general the immature "green" (or in this case purple) pods are OK to eat. Just don't eat any pods that are getting too old (my rule of thumb, eat them before the seed becomes obvious)

There ARE types where the mature seed is OK to eat too, but those tend to be WHITE seeded types (if you ever go to an Indian grocery store you can see bags of white ones for sale) All of the others need leaching to get the toxin out.

You didn't include a sample of your 2018 Bubblegum that will grow pink pods. Did you actually get some pink pods out of Bubblegum this summer?

Of all the network beans that have come back so far. I think the most interesting one is the Munachedda Pale off type seed sent to me by a grower in Maine. I thought I would share this with everyone here. The first photo is new Munachedda Pale seed from that grower. The second photo is the off type. The pattern, seed shape, and size is the same. The colored area looks a bit more tan the MP's almost light yellow. I think I've seen a bean like the off type somewhere but I can't place it. It sort of looks like a half white "Goats Eye". If someone wants to grow out the MP off type they can. I probably won't be able to get to it until 2019. Who knows what else it will kick out. The endless saga of outcrosses continues. 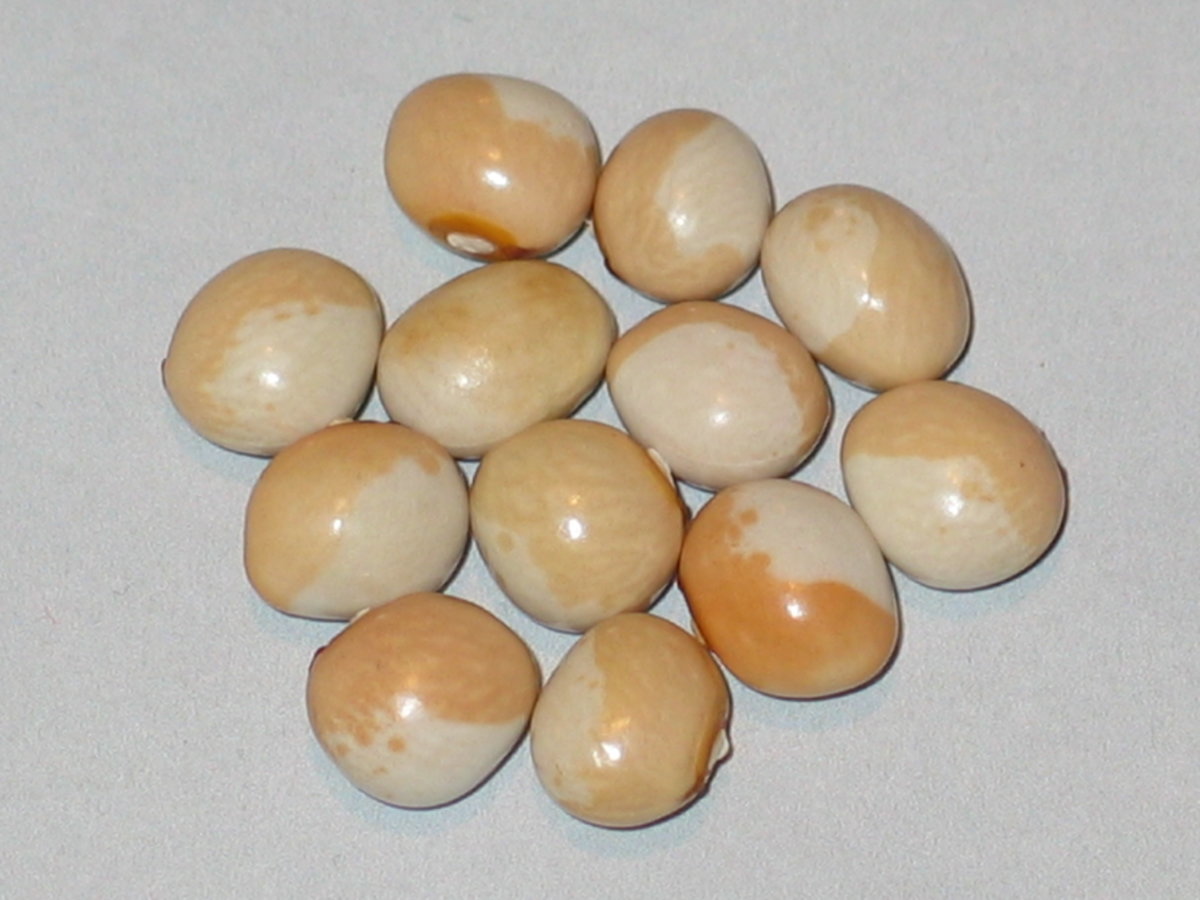 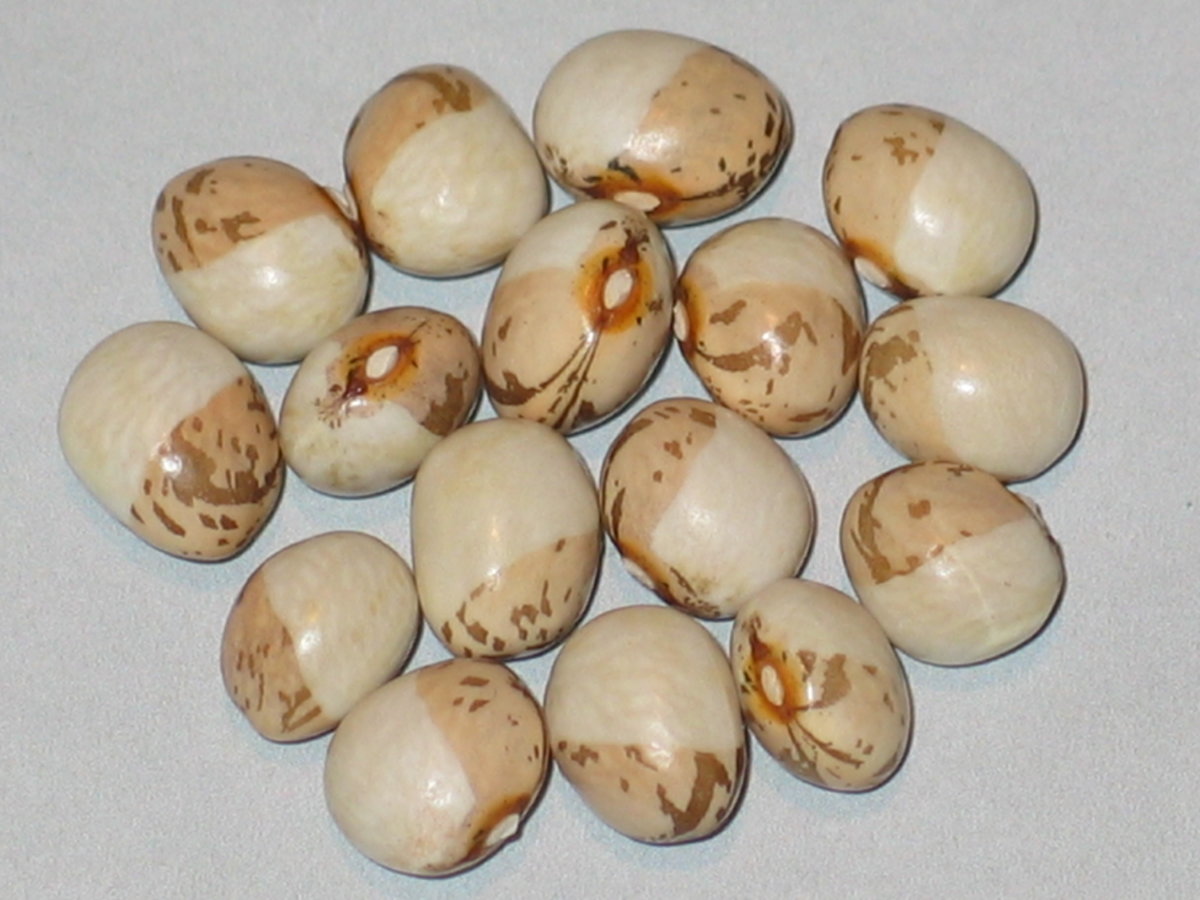 You didn't include a sample of your 2018 Bubblegum that will grow pink pods. Did you actually get some pink pods out of Bubblegum this summer?
Click to expand...

I still need to send the Bubblegum seeds to you. I did find the pink bean again this year. I posted pictures of the beans further back.

I've finished by 2018 bean garden layout and it contains 251 different beans. The area grown in beans will probably be 200 square feet less than 2017 with an increase of about 70 kinds.

Tricia77 said:
Hyacinth beans remind me of Whoopie pies. I still have plenty of beans for trading left if anyone is interested in doing a trade! I also have plenty of my Bubblegum beans if anyone would like to try them. I wish you all Happy Holidays and have fun planning your gardens for next year
Click to expand...

Do you have a list of the beans you have available to swap? I can message you my list.
You had a bunch of gorgeous varieties you were growing this year... and really, can someone ever have too many beans?

Bluejay77- Are the regular Munachedda Pale beans you sent out likely to produce the off type? They are interesting. They slightly resemble your Fagiolo del Anglela. They would be fun to shell!

Haven't posted much here, but this thread is probably my "most lurked"

All the cleaning & sorting is done, and my humidity finally dropped to the point where the beans can be put into storage. Not that many varieties, I'm a piker compared to some in that regard... but what I do grow, I try to grow in quantity.

Common beans:
Limas:
Runners:
In total, just over 61# of dry beans, and A LOT of frozen shellies. My main snap planting, though (Fortex) was a complete failure, having been drowned out. Except for Bird Egg #3 (which was 50' of row direct seeded) and King Horticultural (32 plants), all common beans started out as 16 transplants. Tarbais was the only trial; late DTM, but I was highly impressed by the yield, and the seed quality was nearly flawless.

There were also 10 different soybeans, totaling 11# 11 ounces of dry seed... which is about 1/3 of a normal year. Peas & cowpeas were a nearly total failure, only one of each succeeded, where there would normally have been 5-7 of each. With one exception, cowpeas & yardlongs acted oddly this year; one produced only empty pods, and two produced seed smaller & duller in color than normal. The cool summer was probably to blame; we never hit 90, and the only cowpea to do well (Washday Pea) was the beneficiary of reflected heat, on the south side of my garage.

I wish I could post photos, still haven't adjusted to the loss of Photobucket.

Zeedman said:
I wish I could post photos, still haven't adjusted to the loss of Photobucket
Click to expand...

I've been meaning to sit down and photograph all of mine too. Busy, busy...

Zeedman, I am new on this forum, I know you from the Gardenweb legume forum where I am Hemnancy from my daylily days. I had some trouble at first with photos here, but after a few tries when things didn't seem to work, just clicking on Upload a File like now took me to my Pictures and I just clicked on a photo and had it paste just fine, like now- mixed shellies, the black with white was an outcross from a black pole bean. Your Bird Egg #3 and King Horticultural yields are impressive. My best yields are from runner beans, and Jembo Polish, the big striped bean, does well too, but I ate most as snaps. I would enjoy hearing about more high yielding dry beans.