Beanfan said:
Bluejay77- Are the regular Munachedda Pale beans you sent out likely to produce the off type? They are interesting. They slightly resemble your Fagiolo del Anglela. They would be fun to shell!
Click to expand...

All the Munachedda Pale I had at the beginning of this season had all been sent out. So what is coming back now is all new seed. Now the next grow out of the MP might or might not produce those outcrossed seeds again. It's is more than likely that they won't as they are probably the ones that produced the pure line this year. However that too is not guarantee, but I still think it's more likely that the new MP seed I have now probably won't throw off the new seed coat.

I too have some dry bean pole types that produce truely impressive amounts of seed. I should type up all my varieties here of the pole beans a let you look at my data.

I've posted this photo before, but I will post it again so you don't have to go digging back through this thread to find it. This photo shows how I plant my pole beans. The poles are 6 feet 2 inches out of the soil. I plant 4 seeds around each pole, and devote only two poles for each variety. So with that in mind. Below the photo are the amounts of seed I got from each of my pole beans I grew that way this year. Zeedman can compare how that measures to the way he plants his pole beans, and the numbers of seed he plants. 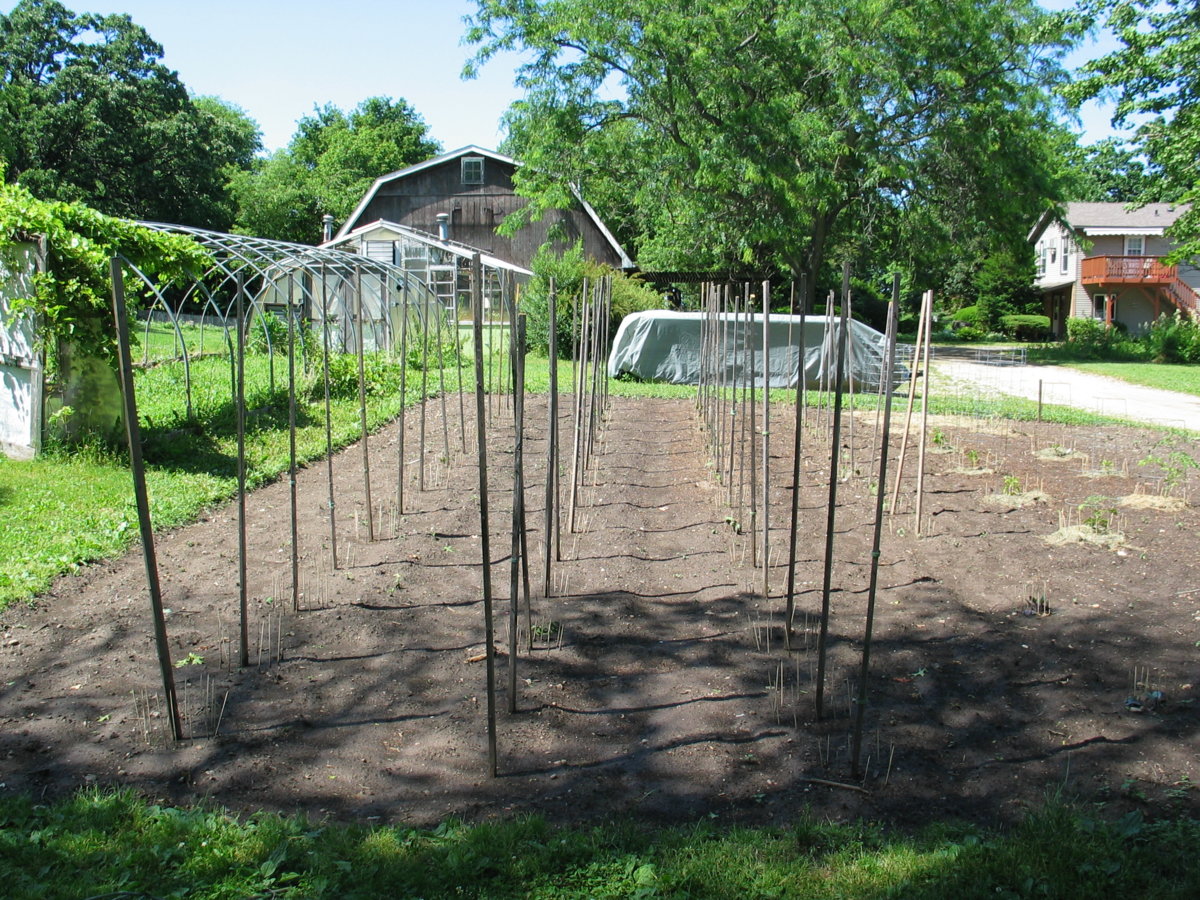 @Bluejay77 how far apart are those poles? And what are the sticks in the ground for, at the base of each pole? There are some really good dry bean yields there. The lima yields, though, seem a little low... especially given your summer heat. That same heat, I take it, is the reason you don't grow runner beans?

My pole beans are in trellises about 6' 6" tall, with plants generally spaced 12" apart for most pole beans & runners, 15-18" apart for limas and yardlong beans. To judge by the photo, that is probably pretty close to the same plant density. I've used wider spacing if the original seed was in short supply, and the dry seed yield per plant under those conditions is generally 6-8 ounces or more. Sometimes rabbits or ground hogs thinned to that spacing on their own, which is how I first observed the full potential of wide spacing... the silver lining, I guess.

If growing strictly for seed preservation, I usually plan on a 10-foot row per variety. If I am forced to use the backup transplants (as I have been the last two years) then I start 16 per variety, and plant whatever survives... which is usually all 16. Hate to throw away healthy plants, especially when some may be lost in the growing season.

Losing a plant or two to disease is not uncommon, so having a few extra means ripping those out with no hesitation is a little easier.

Because I practice the barrier crop isolation method, my bean trellises are widely spaced; at least 30' between varieties, with trellises of other bean species between, as well as other flowering plants. While there is only one lima & one runner bean per location, there might be 3-4 separate trellises spread throughout the garden to act as barriers. There are also multiple trellises of bitter melon and cucumbers, patches of squash, and "Zebrina" flowering mallow throughout the garden. This method of isolation has been pretty effective here; crossing is generally 1% or less. A couple varieties have demonstrated more promiscuous tendencies in the past (such as Goose), so I give them more barriers & even wider spacing. Only had one cross out of ~200 plants in each of the last two years, and none in the three years before that.

Oddly enough, the same isolation technique has been less effective for tomatoes... probably because they begin flowering earlier than most of the barrier crops. Had to drop a couple tomato varieties because of their high susceptibility to crossing.

Zeedman said:
how far apart are those poles? And what are the sticks in the ground for, at the base of each pole? There are some really good dry bean yields there. The lima yields, though, seem a little low... especially given your summer heat. That same heat, I take it, is the reason you don't grow runner beans?
Click to expand...

The poles are 3 feet apart in the row and the rows are 4 feet apart. The sticks were a suggestion of my neighbor who said they would keep rabbits from nibblling on the new bean plants after they emerge. However that didn't work, and I had my doubts but I tried it. Then I erected a low 2 foot high fence made out of the 2 x 8 foot plastic lattice that is sold by Manards. That Works ! I've grown runner beans here to some degree of success. They don't produce a lot of beans. So I concentrate more on P. Vulgaris and Lunatus. The limas didn't do that great this past summer. The area I was growing them in develops more and more shade as the summer progresses and the sun gets lower in the sky. The white lima Hurley I planted further away from the trees shadow line did well. Next year I'll plant a lima variety or two on the north end of this plot and they should do well.

Now that the growing season is over there is still bean mail that comes in from time to time.

These beans from a fellow in Iowa who is about 16 years old and his parents are a member of the Seed Savers Exchange. He also grew out 19 of the Network beans this summer. He sent me 17 beans, about 15 of them I had not had before. He replaced two of our Network beans that got lost in the mail or destroyed during grow out. He replaced Anakin Kuvalli Giant and Duilius. 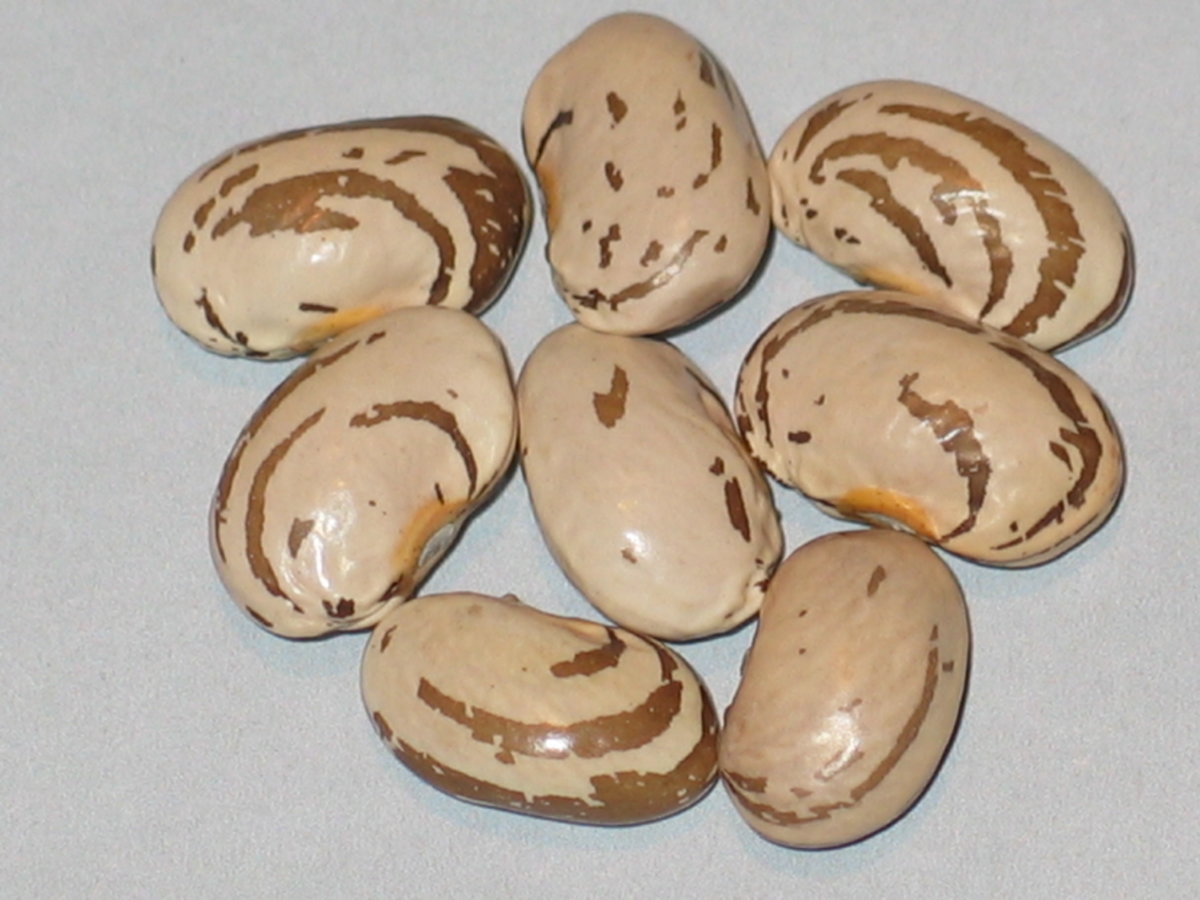 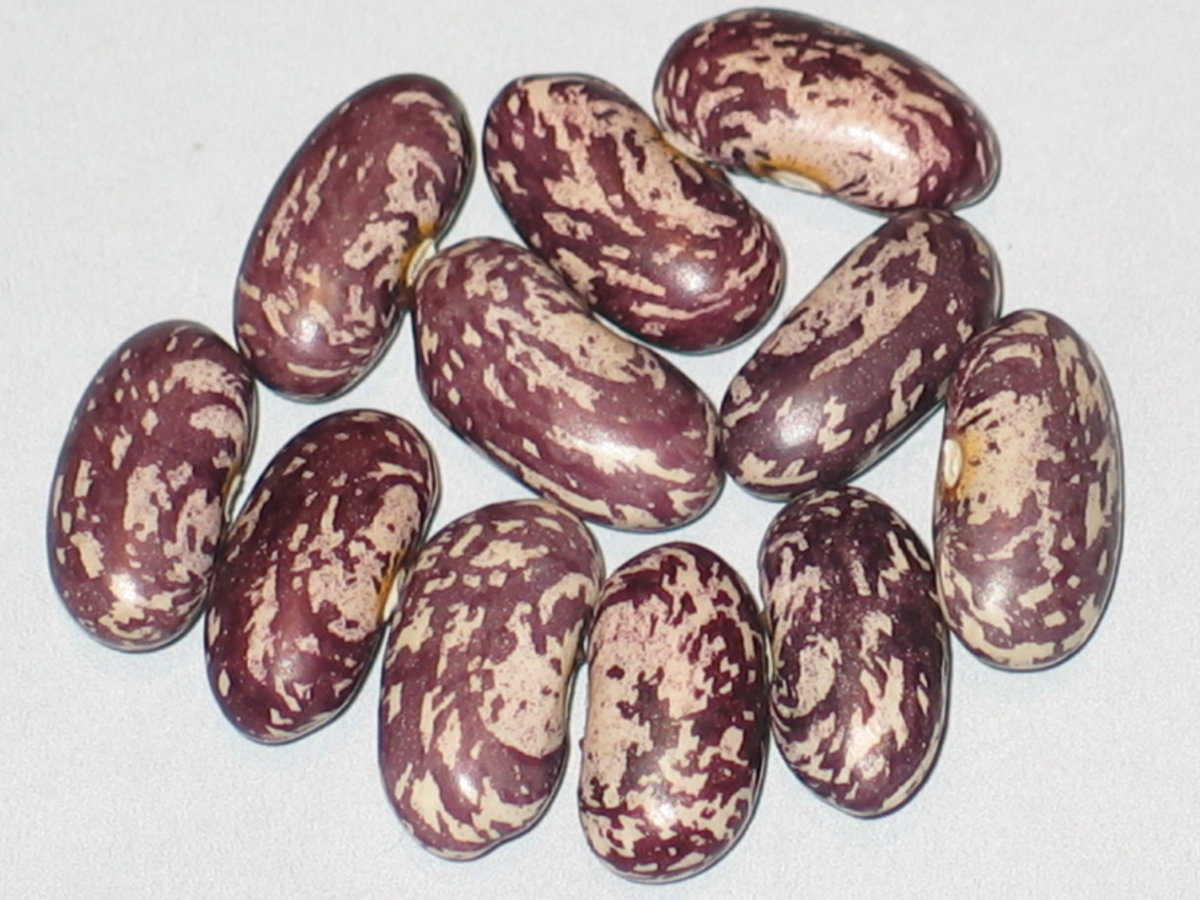 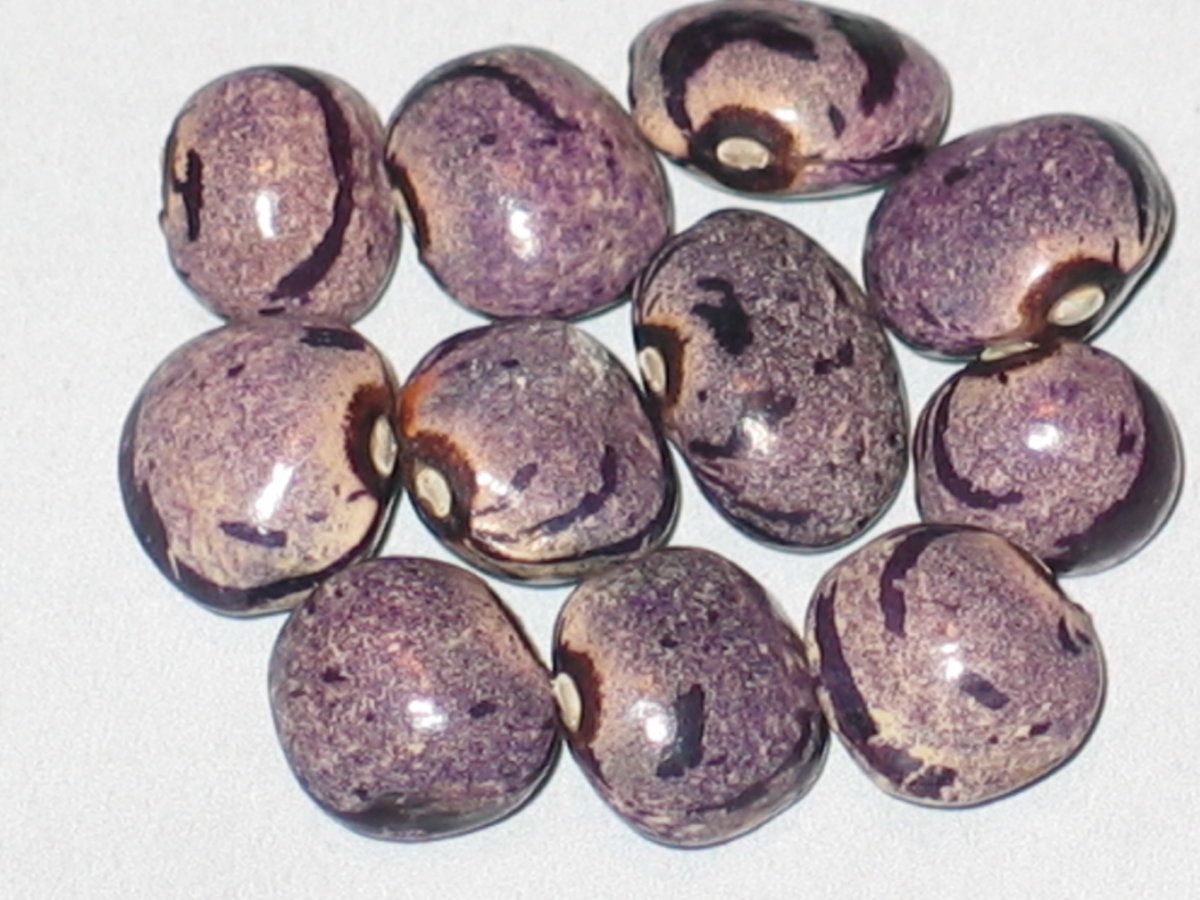 Cranberry Flieder - Pole - There are several of these same looking beans under different names. I have one called Forelle Flidderfarben, and one in England called Cranberry Lilac. 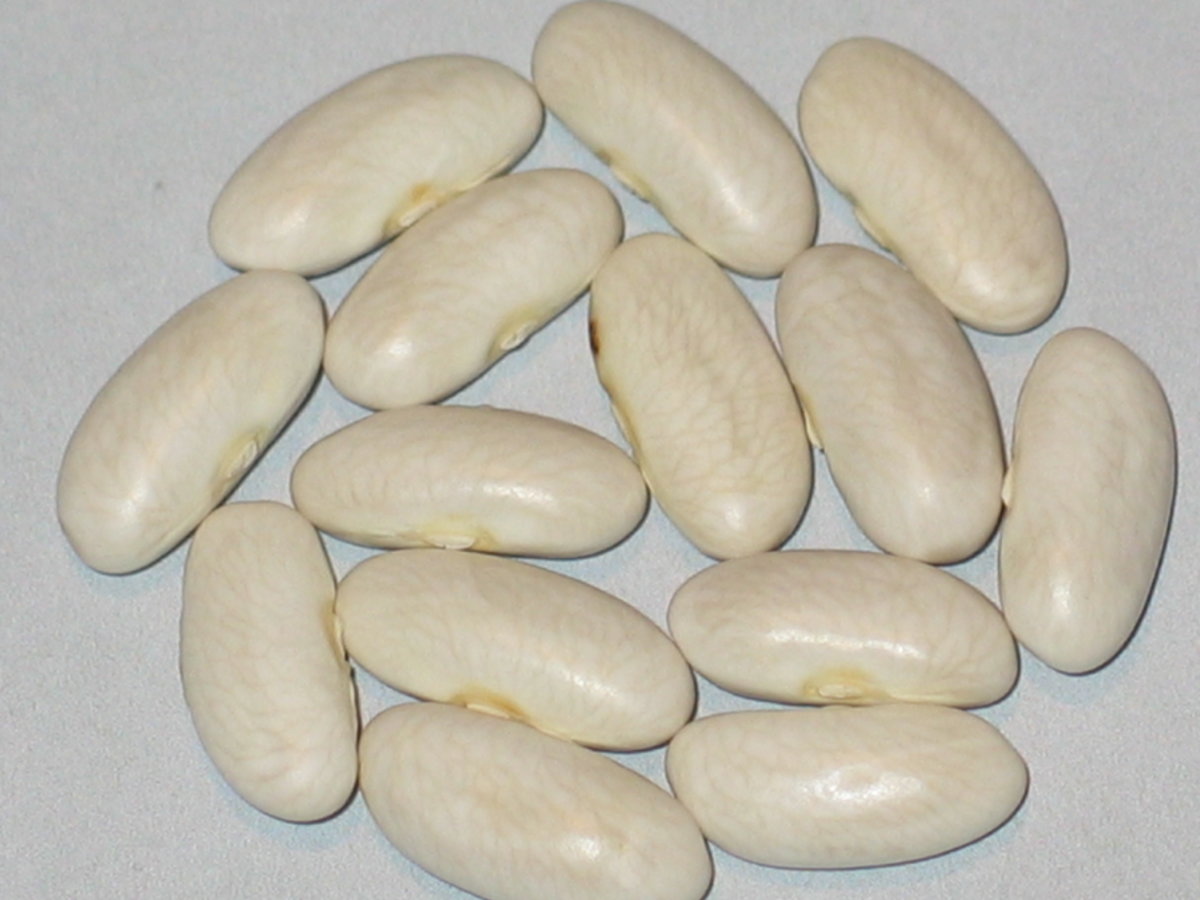 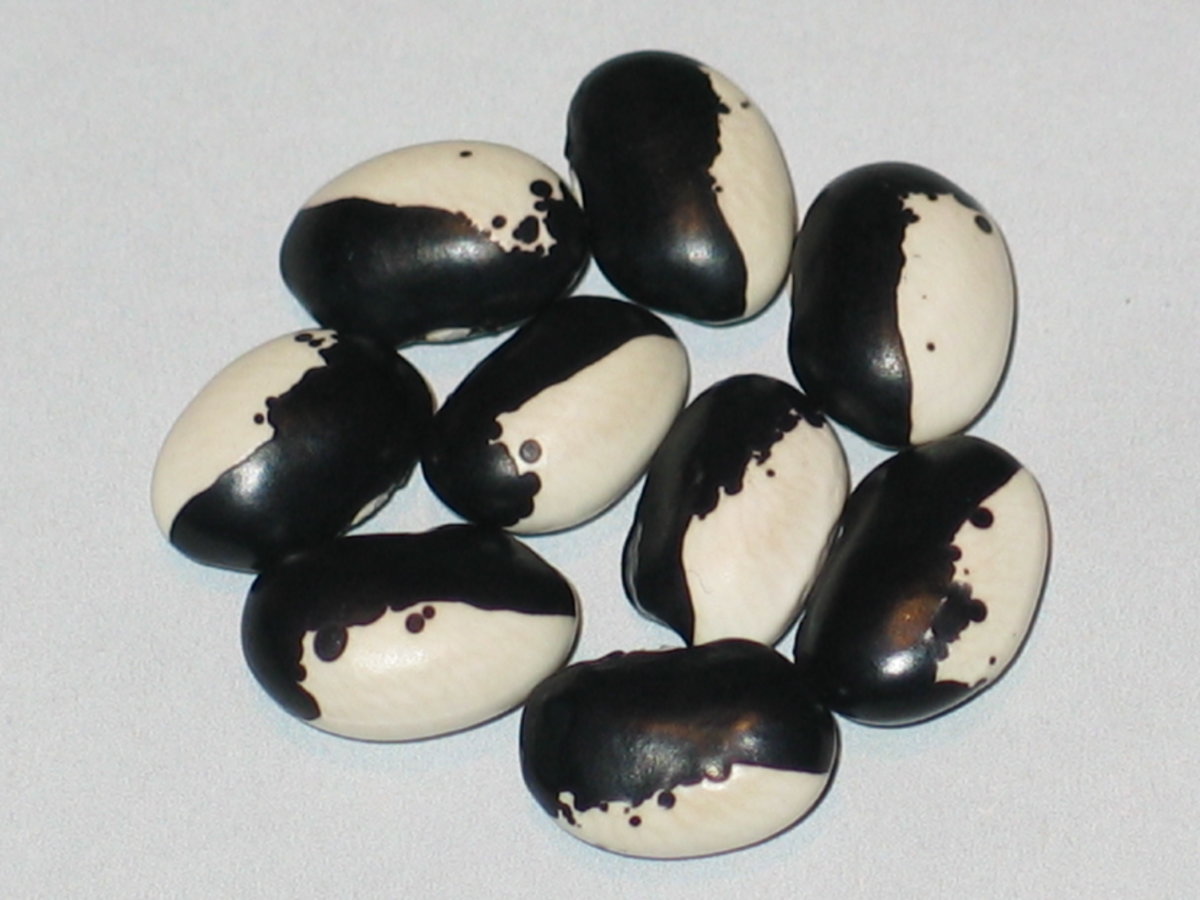 Georgian Pole Black And White - Pole - No doubt from the nation of Georgia. 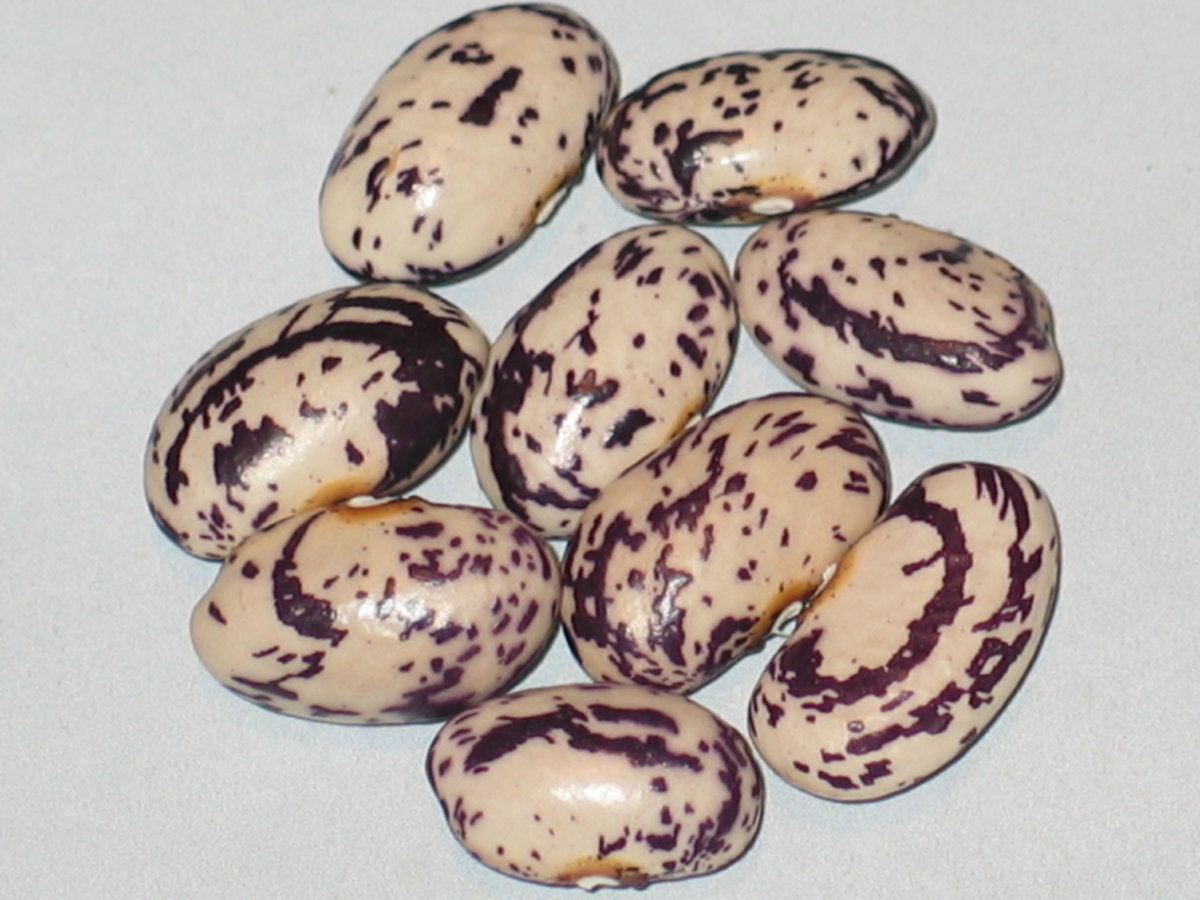 Georgian Pole - Probably another variety from the nation of Georgia. 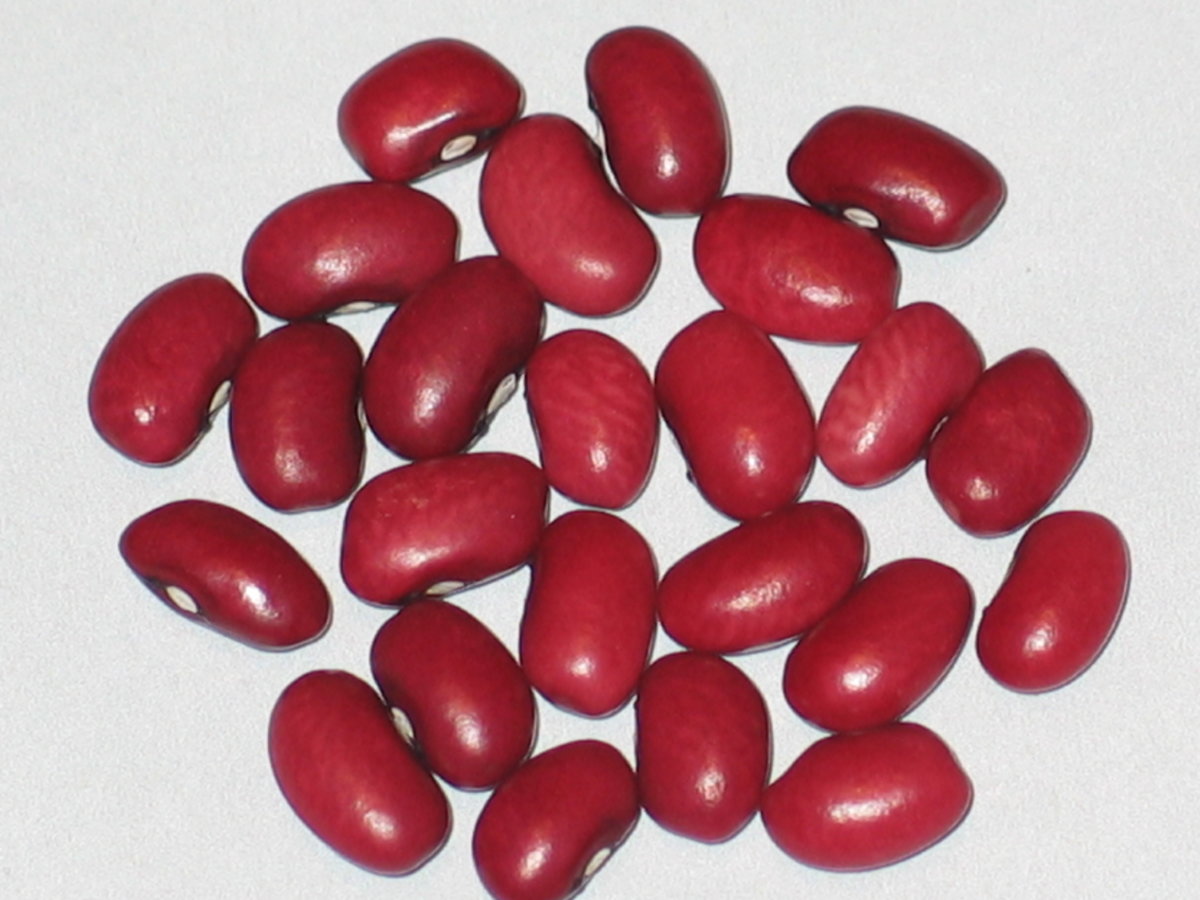 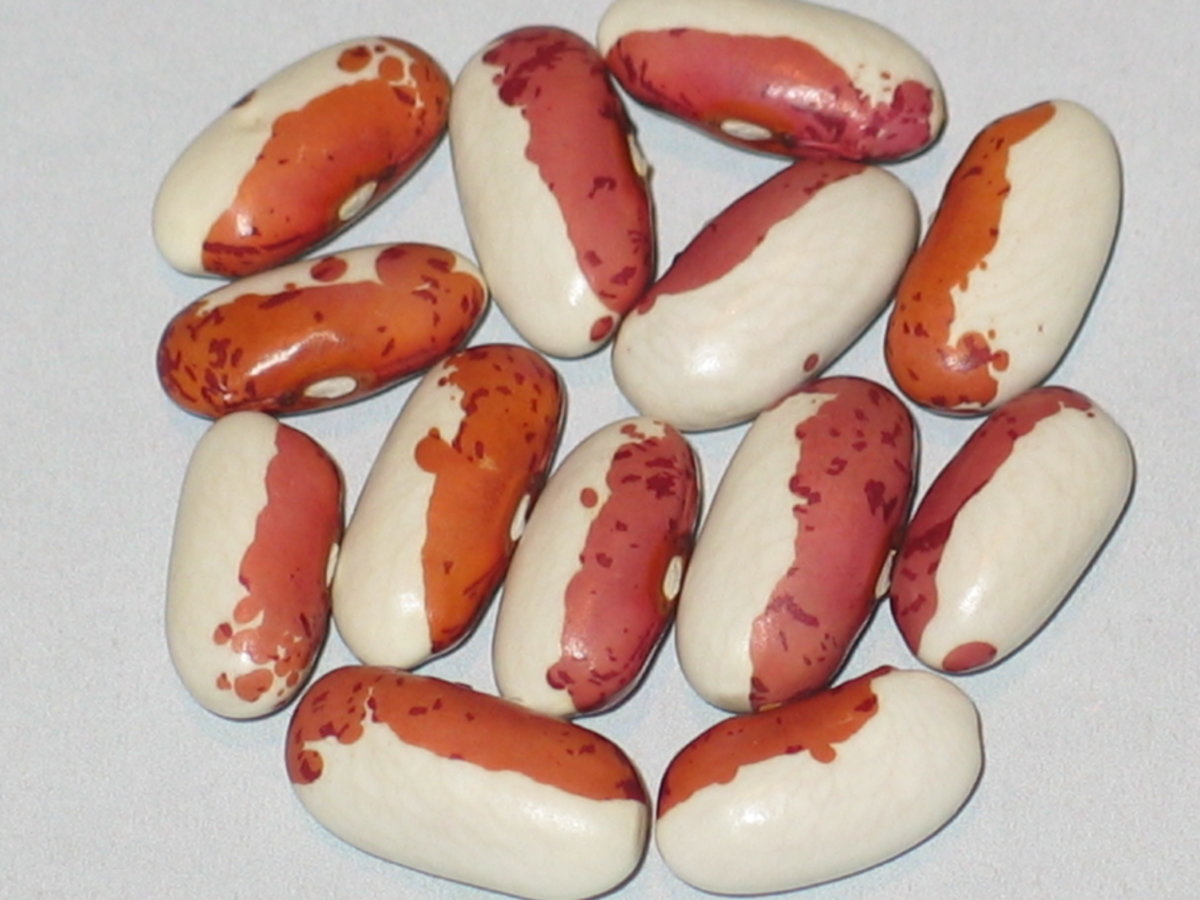 Bean Mail​
And more beans from our young Iowa grower. 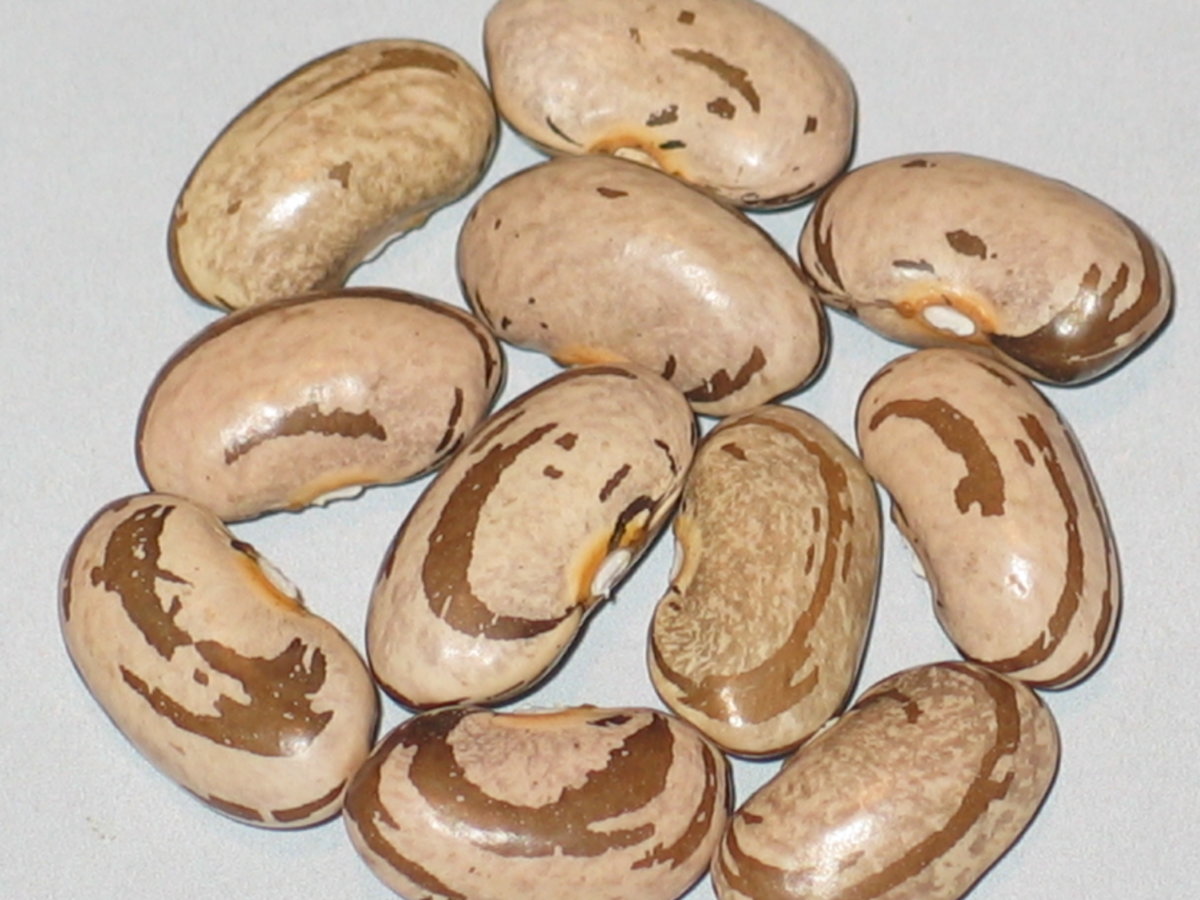 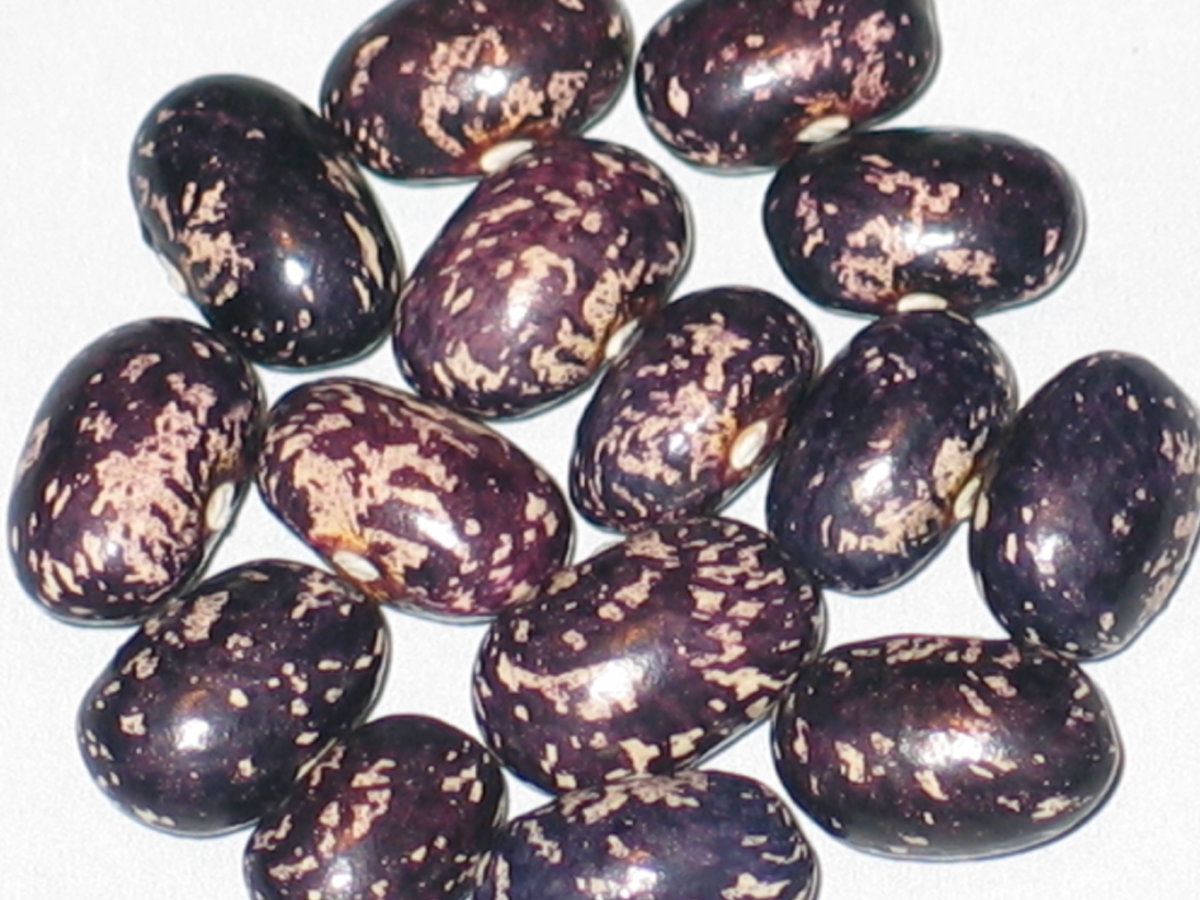 Stangenbohne Rasacher Kipfler - Pole - This name would suggest the origin would be Germany.

Actually a LOT of these beans are from there .