Bluejay77 said:
I guess when it comes to disease. I have been lucky. I haven't noticed any trouble with my grow outs. The places that have had beans in the very same place more than once haven't actually been used for beans that many times except for my backyard bean plots (this is the 8th season) and my south flowerbed. I have considered giving my backyard ground a rest from beans for one season from time to time. In 2016,2017, and 2018 I grew beans on the same ground at a former nursery, but I have not been there for two years and don't plan on going back. The former nursery has too many deer visiting nightly. The last year I was there at the nursery some of my beans came down with mosaic and I didn't harvest seed from those varieties that were affected. The place where my large 80 variety bush dry bean plot grows this year. This is my second year there and I don't consider that a long time in the same place. When the fellow who owns the property retires in a couple more years. I may have grown beans on that ground perhaps 4 or 5 times. He told me then he wants that piece back again for his gardens. So by that time I might find anther new place to go. Where my pole bean plot is this year. I built a raised bed box on the place where I had very spotting success with beans because of drainage. That bean ground was buried with a new layer of soil 11 inches deep. So I consider that piece of ground as being used to grow beans for the very first time. Where my pole bean plot is this year there is another plot the same size inside my deer fence and I could alternate beans between the two plots from year to year with other vegetables.

I heard someone say at one of the seed swaps I attended in the last few years. That Bill Best of Sustainable Mountain Agriculture fame. Has grown beans on the same ground for a countless number of years.
Click to expand...

It's good to know you haven't had much trouble besides that one plot that got mosaic virus. I think I'll probably ignore crop rotation til I start seeing problems (and knock on wood, no problems for a long time!).

finished shelling out the beans i had already picked. need to get out the next few days to pick some more and check all the garden patches of beans for new pods ready to come in.

i have had a few bean gardens 13yrs or so now, i rarely plant large blocks of the same kind of bean so i'm not seeing diseases spread through entire gardens. i do see spots here or there of some diseases but i will either pull a plant or remove some leaves and then see what happens. with all the fogs/dewfall/rains fungi is the biggest problem i have to watch out for. if i can get things picked when they are ready then it solves the problem.

finished shelling what beans i had picked last night. did some sorting (the first sort) this morning just to get some box tops back so they are ready for the next round of picking. which will start this afternoon. i'm glad i planted a lot of beans this season to restock the containers and i've really been enjoying this season (as usual ).

to me there is something so tactilely satisfying in running my hands through piles of beans and the visual part too of being able to see all the shapes and colors.

since i am happily OCD about all of this i don't care how long it takes me to do it. for those who are more in a hurry and don't grow too many different beans there are much faster ways of getting dry beans out of shells and sorted and i've done them in the past but since i'm rarely doing large single plots these days i've mostly left those techniques behind.

for the more round beans like soybeans, when i grew them last time in a big enough plot to make it worth it, i got out some old pillow cases and put the pods in the cases and then walked on them barefoot and also scrunched them with my hands to release the beans from the pods. then i had a ramp of cardboard set up with a tray at the bottom so i could put the pods at the top and then the beans would roll down. if i had to tap the cardboard and move some pods around that was ok, but it got most of them done fairly quickly.

for other beans that also worked ok to get a rough first sort done and to remove most of the pods.

the other good method was the windy day sort with sheets where i could get the pods mashed in the pillow cases well enough and then let the wind blow the pods and chaff off to the side.

note, all these methods are dusty (and especially so for the soybeans if they are the kind that have the hairs on the pods). i sure don't do them inside. it is dusty enough doing single pod shelling inside as i am here. once in a while i have to wipe down the area where i'm sitting to get the dust piles back under control.

the other day since we've had the masks out for COVID-19 i tried doing some shelling to see if it made any difference in how many times i'd get a runny nose or sneeze. the first evening it seemed to have helped, but last night some of what i was shelling got through and i was sneezing anyways. sometimes there are fungi in the pods and also the dust from the pods if they've gotten splashed or were dragging in the dirt for a bit before they got picked. for me just dusting anything will get my nose running so i kinda expect it anyways whenever i'm doing much of anything with any dry harvesting/sorting.

no, this isn't my setup, but it is amusing to watch...

flowerbug said:
no, this isn't my setup, but it is amusing to watch...

this was a good point to stop and reorganize my room a bit. first thing this morning i took all my first stage sorted beans and combined the boxes so i could have most of them in one box per type. then i stacked them on the kitchen counter and did a show and tell for Mom. yes, she's appreciative, but like most people she just wants to know what she can eat.

with all those boxes out of my room and off the futon i could then get at the boxes which were underneath and move them out of the way to where they are up on some higher shelves until i need them again. then i moved everything back to the futon from the kitchen and have those sorta organized at least i know where the main bulk eating beans are at and then the rest are stacked on top of those, all of them with spaces allowed for further drying down for the next few months.

i have six buckets of bean pods and shredded papers to go out to be buried in the garden i'm weeding. if i'm ambitious i'll get that done this afternoon... hmm, i feel a nap coming on...

it frosted last night here. i wasn't sure at first, but now it is light enough i can see the frost on the creeping thyme and ice in two birdbaths.

we'll see how many beans will finish ok after this. as usual will be interesting.
R

2020 Bean report. Summer was mostly cool until 7/14 and then cool again starting 9/15. All are pole beans and all were started in peat pots starting May 1 when the soil was still too cool to start beans outdoors. Summer days average 75F nights are commonly 50 F or even below.
Alice Whitis. 8/22 large snaps. 9/8 some rubbery. 9/12 some are drying.
Aunt Jean’s 7/20 snaps. 8/12 some turning a bit yellow. 8/28 some are dry.
Aunt Kate’s. They were planted late on 5/21. 7/19 they branch heavily with several vines going up from the bases. 9/8 immature full size 4 inch snaps. 9/12 large number of medium size ¼ inch diameter snaps good for green beans. 9/19 Many are full and some are rubbery and mature.
Barnes Mountain. 8-8 first blossoms. 9/12 some small and ideal for green beans. Some large. Small crop but good for late September use.
Black Greasy. One early trellis. 8/25 lots of greasy snaps. Perfect for green late beans. 9/15 still fine full snaps. 9/19 some are dry.
Clay Bank Fall, two early trellises, two late. 7/26 snaps. 8/22 loads of pods with red streaks. 9/8 many are dry even on the late trellises. 9/19 most are dry but there are still many usable full snaps. This is my favorite so far. Frank Barnett discovered these.
Frank Barnett Cutshort. 8/8 first snaps. 8/25 very tasty full snaps. Small crop this year.
John Morgan Stumbo Greasy Cutshort. 8/2 heavily branched vines are still fairly short. 8-8 climbing well now. 9/12 there are 2 inch snaps. 9/19 I do not expect to be able to enjoy full size snaps or save seeds.
Monachine/Pellegrini. 8/30 full and changing color. 9/12 some are rubbery. 9/15 many are dry. These are fine full beans.
Monte Cristo is grown for family members who think Blue Lake is the ideal bean! Two early trellises started 5/1, one 5/15, one 6/1, one 6/10. 7/26 snaps. 8/2 loads of full size snaps. 8/30 mostly over large and tough. 9/5 they are finished.
Robe Mountain. These are also grown for Blue Lake fans. 7/30 there are snaps. 8/2 loads of full size snaps. Better than Monte Cristo when big.
Royal Corona. White runner 6/27 the tall vigorous vines have blossoms! 7/13 there are 3 inch snaps. 8-8 fat maturing pods. 8/21 some pods at yellow shelly stage. 8/30 mostly dry. 9/18 picked the rest of the dry pods. Unlike most runner beans these survived many 90F days.
Ruth Bible. 7/30 there are snaps. They are similar to Tennessee cutshort but vines branch more and have heavier foliage. 8/22 foliage is still much heavier than Tennessee Cutshort and full snaps are good.
Tennessee Cutshort. 7/30 there are snaps. 8/22 snaps maturing on almost bare vines. The full beans are very good.

In Poland it is still sunny September, although the mornings are already cold. The first frost is announced in mid-October.
The pole bean pods dry up on the plants. There are still quite a lot of them.
I shell dry pods. It's pure chaos for now, but I don't have enough space to keep each variety separate. There are no similar beans in each box, so there will be no problem separating them. I will save it for late autumn evenings. 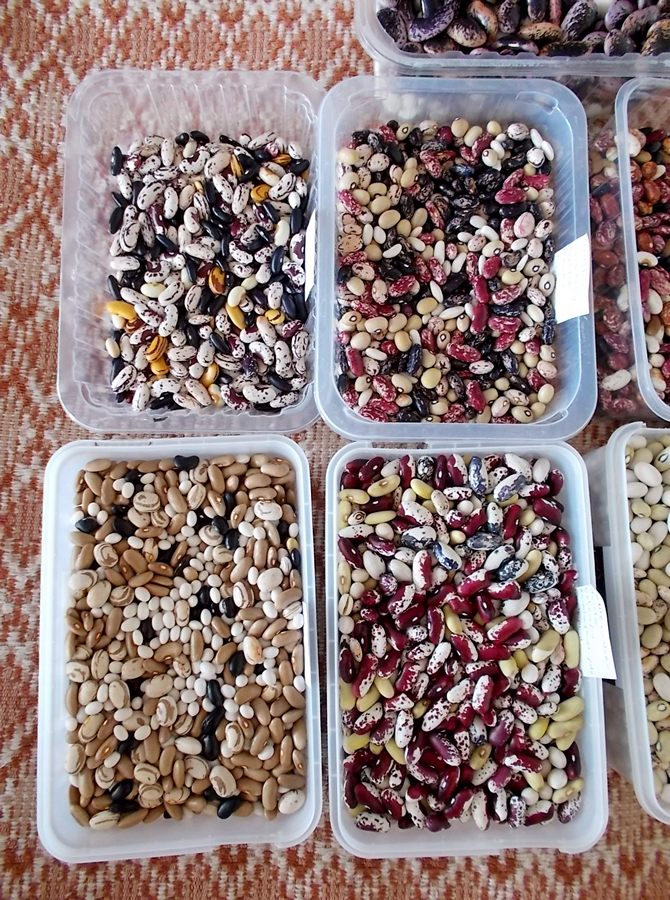 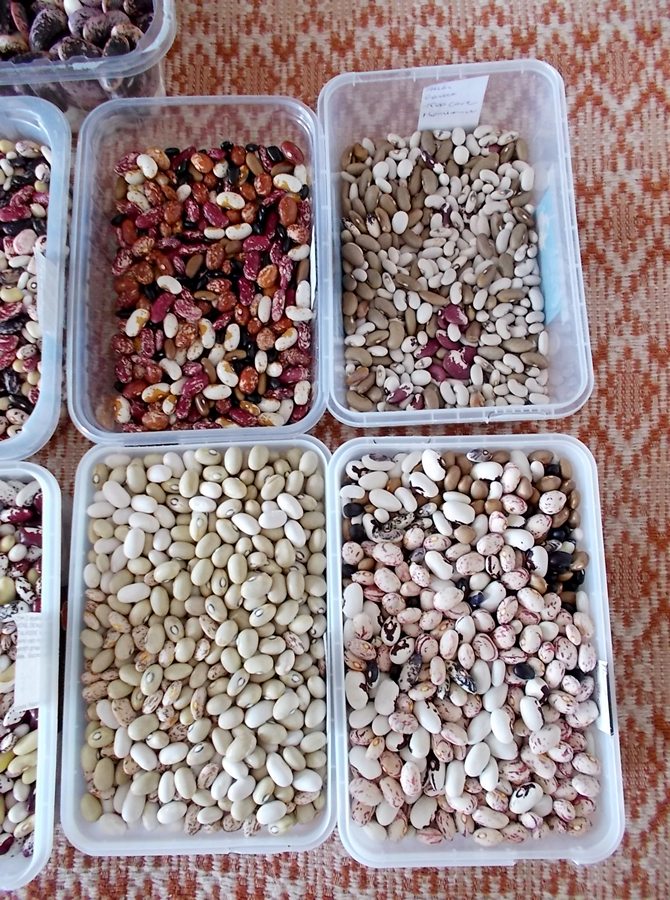 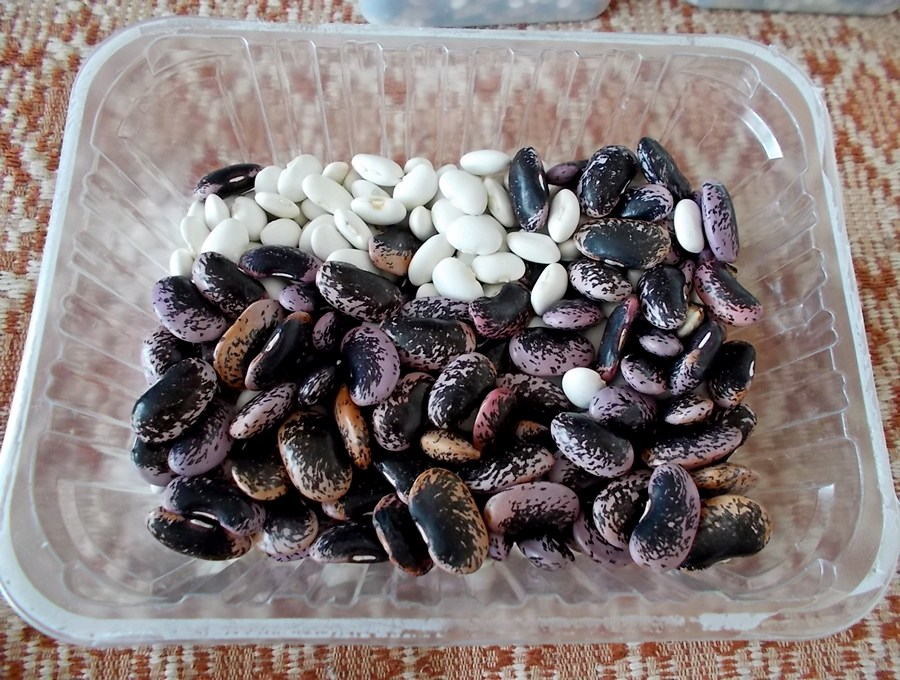 2020, it is official. My bean plants are dead and I got no beans from them. I had great success with some things, dismal failures with others. I plantedBest of All Wax and Black Cattle. Sorry Russ, but I got nothing.
You must log in or register to reply here.
Share:
Facebook Twitter Reddit Pinterest Tumblr WhatsApp Email Link