I've only grown beans down here two years and my climate is different from @baymule . I'm surrounded by bodies of water which mitigates the extremes of heat and cold. I've noticed if I plant beans the very first of March they tend to do pretty well. 2020 was better than 2019 because I got my soil in better shape. If I don't plant until April the results are often not very good. Climbing tend to do better than non-climbing with the later ones.

I get a harvest in June/July. So I try a second crop, planting in early July. In 2019 no non-climbing beans did anything so I only planted climbing beans in the 2020 summer crop. I hesitate to say bush, semi-runner, half-runner, or pole on that second growth because the results are so uncertain so either they climb or they don't. In 2019 only one climbing bean produced like I thought it should, but I got some from a few others. I'm not growing varieties, I'm trying to stabilize segregations. I don't know if you call it progress as I did not get any stability with that second planting in 2019 but I got plenty more segregations. Yeah, that's progress.

This year for the summer planting I tried three segregations of three different beans from the spring crop, a total of nine. I selected those because they kept producing in the heat of late spring. Out of those, five look pretty good and I don't expect much of anything from the others. Of those four others several plants died and the ones remaining look stunted. They are in the same beds as the others so I don't think it's a disease. I pre-treated with a fungicide when I planted them as I thought it might have been a fungus last summer. The extension agent thought it was a fungus. Maybe that helped this year or maybe it's just the better soil. I got the pH down from the high 7's to the mid 6's and improved nutrients by digging in some clay to the sand/compost mix they call garden soil down here.

I don't know if my issue is that they are light sensitive, my longest day is only about 14 hours at the summer solstice. I don't know if they are heat sensitive. I'll probably try some shade cloth next year to see if that helps. I think it is more the heat, high humidity probably doesn't help.

@Bluejay77 my plans for Karachaganak are to plant in the spring in separate areas the ones I think are round half-runners, oval half-runners, and round semi-runners. I trust my March planting to give decent results for growth habit. If I remember right @Artorius and at least one other person was growing Karachaganak this year. I haven't seen the final results from those but Artorius said he had different growth habits from his as they were growing. I don't care what growth habit Karachaganak settles in but I don't know that it can be considered stabilized until it settles in something. Then I can play with the other one. I'm not that worried about round versus oval though why not see if that stabilizes too while I'm at it.

You are probably correct in saying that Karachaganack needs to stablize in growth habit as well as seed coat and seed shape to be deemed stable. I keep getting a semi runner habit out of Karachaganack every time I grow it.

I got a bush cross a few years back I named Sebastian. Half white and half purple Kidney shaped seed with the dividing line between the two colors at a diagonal about in the center. The next year I got a semi runner with the same seed coat and shape. I named that one Sabrina. Sebastian now continues to grow as a bush and Sebrina is a semi runner.

@Ridgerunner
My Karachaganack beans have finished their vegetation. I harvested the last dry pods. When I shell out all of them, I will show the result. I have had a few that grew as a bush and a few that grew to a height of about 2 meters. The color of the flowers and the shape of the pods were identical.

This is the way growth habit was explained to me.

Bush beans are not going to climb. They do not wrap around anything. I don't think semi-runners climb either, I've never heard that stated one way or another. Other than size I don't know if there is any other distinguishing characteristic between bush and semi-runners. I think there might be but I just don't know.

A half-runner or pole will climb a trellis, pole, or about anything it can wrap around.

Things are winding down bean-wise. Canon City was supposed to be the main shelly this year, but only had about 50% germination (it was 2013 seed). The plants that made it produced plenty of seed though, so I picked the last of the remaining pods for shellies. There'll at least be enough for one meal. 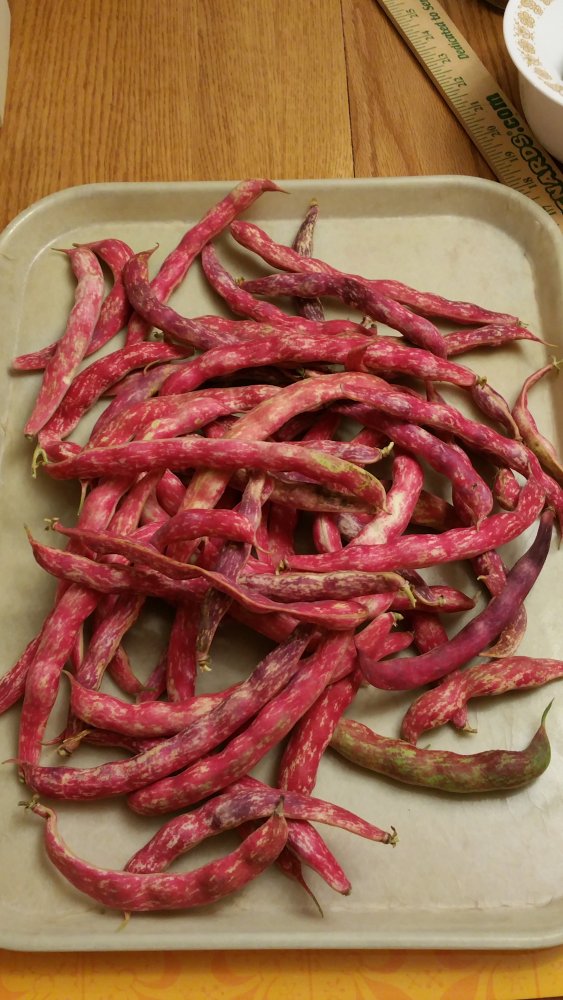 there certainly can be some fun with bean varieties that don't want to become stable. i've been planting Monster Children and some of them are absolutely lovely looking beans and i wish they'd settle down because i'd like to have those children's children for new varieties to give away. since i can't replant everything each season i can only pick a few seeds from each of the new ones to work with and so far only a few have come close to repeating. the good news though is that all of them are at least bush beans or just slightly running like the Yellow Eyes.

the improvement i hope to get is to make the pods less difficult to shell. currently they're very stiff and tough to shell out (like Dapple Grey, one of the parent beans of Monster).

i'm also working with another group of beans that i call Domino Children and most of them are also not stable. talk about combinatorical explosion, but at least it is interesting. i'd need acres to grow them all out along with all my other selections i want to get planted next year looking for even more out-crosses...

i'm still shelling out what i picked a few days ago and it all does need to dry down some more, but just to see about how many lbs of PD beans i have on hand already and it comes to about 14lbs. yes, i did plant a lot of them, but they've also done well again this year. i'm not done picking them yet, but the rains have returned, not sure what else i will get from them. there's still about half to two thirds of the north garden's PDs still full of plump pods.

we did have to turn the heat on for a bit this morning so that will help the beans dry out a bit faster now.

Dr. Martin lima has really big pods. Next to it are Snow On The Mountain and Florida Speckled pods.

Artorius said:
Dr. Martin lima has really big pods. Next to it are Snow On The Mountain and Florida Speckled pods.

Beautiful. Dr. Martin supposedly has too long of a season for me to grow it here; but I've hod good results with lima transplants, so it may be worth a try. German Butterbean did really well this year, all pods matured.

It's a miracle that I can harvest some seeds from my lima beans. They regenerated for a long time after being bombarded twice with pieces of ice. I made Dr. Martin seedlings in about two-liter pots at the end of April.
Last edited: Oct 5, 2020

i was able to get back out today for continuing to put up gardens and after some of that i switched over to checking out beans and then picking a bucket of beans so i will have more to shell out here as i've caught up again.

the entire rest of the week is forecast to be clear and dry which i sure hope will hold as it lets me get things done here that need to be done before winter and also to get beans picked and while they've dried off after the past week of mixed rains.

i was rather surprised by the amount of dry pods i found in the north garden when i went out to pick this afternoon. i made sure last week before the rains arrived to get as much of the pods that were ready or close to ready picked so they'd not have a chance to spoil from the repeated rains. i was also surprised by the quality of the beans as i was picking i would sample some pods to check them to make sure i wasn't wasting my time and many were just fine. this is good because i just picked a full bucket of beans and probably have a few more buckets yet to go this week as i can get to them.
You must log in or register to reply here.
Share:
Facebook Twitter Reddit Pinterest Tumblr WhatsApp Email Link