I'm in the same bag wanting to get my large offsite bean gardens cleaned up. Supposed to have some nice 70+ weather for a a week to 10 days. The large 80 variety dry bean plot that I have. I harvested just about every dry, yellow, and green pod I could clip off the vines. I did last Wednesday through Friday. I figured a killing frost was coming soon so I would just take everything home and dry it out there so any moist seed wouldn't be hurt. I've got cardboard all over the house with pods spread out drying. I would say all in all it was a pretty good season and found some interesting things in my beans. Photos of course will be forth coming probably starting sometime in November into December as the memories of this season slowly fade into history.

i had a helper this afternoon picking some of the beans. after we finished i had a bucket and a half of mixed shelly and dry pods to sort out so now i have an almost full bucket of beans that if i want them to be shellies i can get them done tonight and tomorrow morning and then cook them up or i can spread 'em out and dry them and then they'll be dry beans like the rest of them... choices, choices... maybe both, i'm tired...

Bluejay77 said:
I'm in the same bag wanting to get my large offsite bean gardens cleaned up. Supposed to have some nice 70+ weather for a a week to 10 days.
...
Click to expand...

it was really a perfect afternoon and evening for picking. just the right temperature and not too much of a breeze.

Rio Zape is now one of my candidates for a parent of Purple Dove:

your picture is much better than mine, but the color/pattern is the exact same. the smaller beans on top are just dried down more than the ones below.

having some PD shellies for lunch in our bean burritos. took about 2hrs to get them shelled this morning. not bad, very yummy...

last night i had a smaller bowl of PD shellies to cook up and also mixed in some Dappled Grey shellies to see how they worked out being cooked like that.

they were edible but cooked faster than the PD beans so they were fairly mushy by the time we tested them out. they are a a much larger bean than the PD so i was surprised they cooked faster. c'est la vie. i don't know what "Live and learn." would be in French.

while i was cooking up these beans i also wanted to pour off some of the liquid to use as a pH indicator. my first attempt didn't go well so i just gave up and figured i'd try it again the next time. the 2nd attempt i brought the water up to get the pigment out of the beans and then left it sit for a while and sadly that just gave me cloudy slightly purple water which doesn't look to be settling out. so it may work, but it isn't as nice and clear like the water is when the pigments are first extracted. i don't have anything else now but dry PD beans so perhaps the next time i cook some up i can see if i can get the extraction process down.

the liquid can be used to make test strips or you can preserve it by putting some rubbing alcohol in it and keeping it in the fridge. i don't know how long it will last, but as a project the next few weeks i'll do some soil samples from various gardens and test the water. i already know our well water has some calcium in it so i'm curious to see if the gardens are alkaline from being irrigated or if the organic material i keep adding to the gardens is keeping the soil fairly neutral or what.

next year i'm going to take a bunch of the purple pods and try to extract those pigments instead to get a more concentrated indicator. it's interesting to try things out.

flowerbug said:
next year i'm going to take a bunch of the purple pods and try to extract those pigments instead to get a more concentrated indicator. it's interesting to try things out.
Click to expand...

Have you ever grown the Chinese Red Noodle yardlong bean? The reason I ask is that unlike purple common beans, the pigment is not destroyed by cooking. They are purplish when cooked, but turn bright red when vinegar is added... those were the bright red dilly beans in the photo I posted last year. The cooking water is also strongly colored.

Zeedman said:
Have you ever grown the Chinese Red Noodle yardlong bean? The reason I ask is that unlike purple common beans, the pigment is not destroyed by cooking. They are purplish when cooked, but turn bright red when vinegar is added... those were the bright red dilly beans in the photo I posted last year. The cooking water is also strongly colored.
Click to expand...

no, i've not grown those before. if they are a climber i'm not usually doing good with those here. also i want things that finish early. as we found out this year that if they're not mostly done by Sept 15th then i may not get a harvest from them.

with the heat running some evenings the past few weeks the beans have been drying down pretty well, so the past few days i've been getting the first sort of the Purple Dove beans wrapped up (basically removing the obviously rotting ones and any hanging stickers on the hilum or any other bits of chaff).

from the North Garden i weighed 12lbs.

from all the other gardens i weighed 11lbs 4oz.

i have already set aside 10oz of seeds selected for planting next season and another 10oz of seeds that were from the earliest plants to finish up.

there are distinct color differences between the seeds planted in the different gardens. the better the soil and the more organic matter (likely more acidic soil) the more purple the beans had on them. the North Garden has the nicest topsoil and plenty of organic matter in there so it was a pretty productive garden and the beans are almost all purple.

i'll also select some more seeds from the North Garden's harvest for replanting since i did alternate plantings to encourage crosses. it was planted later than the other gardens i didn't and can't really select for "Early" - i was just glad to get a decent harvest and to have it all worth the effort. 80-90days for a dry bean harvest is what i hope for and this year it was spot on for that garden.

These are the beans that I have committed to growing for TEBN this year. Only four. Unfortunately, Alice Sunshine failed. I won't have 60 perfect seeds.

King Of The Early 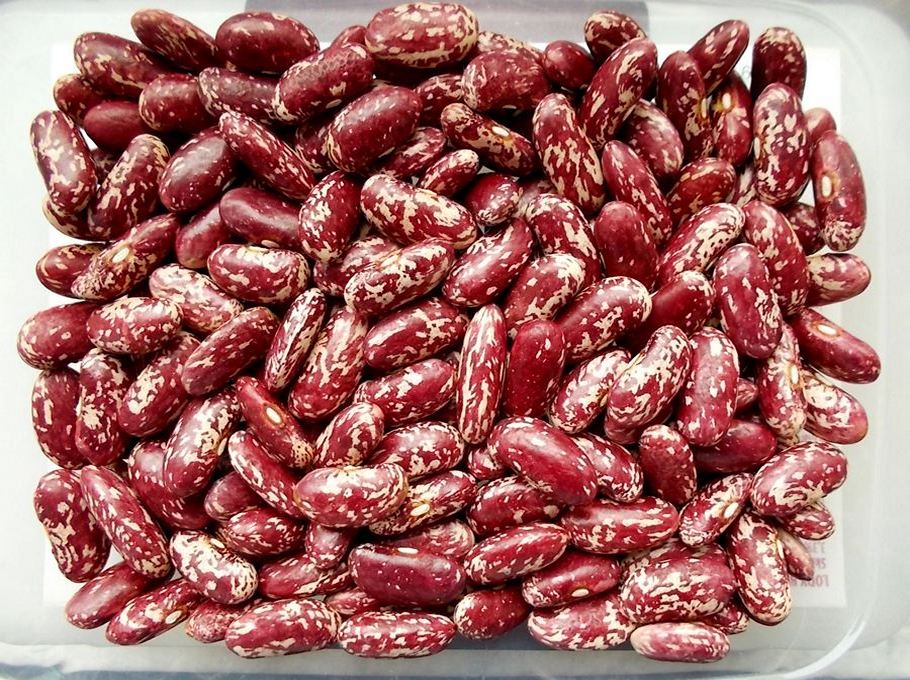 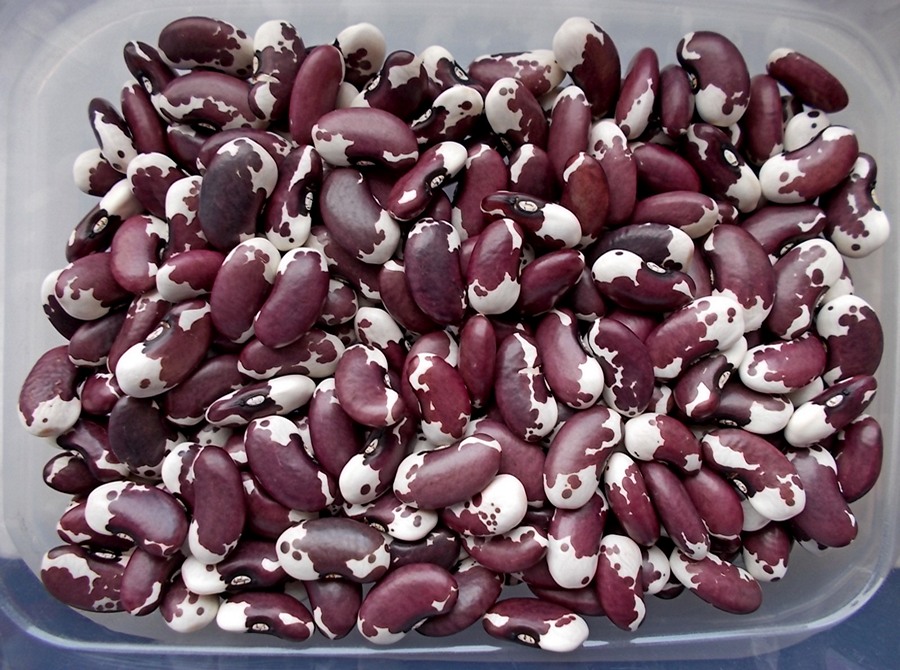 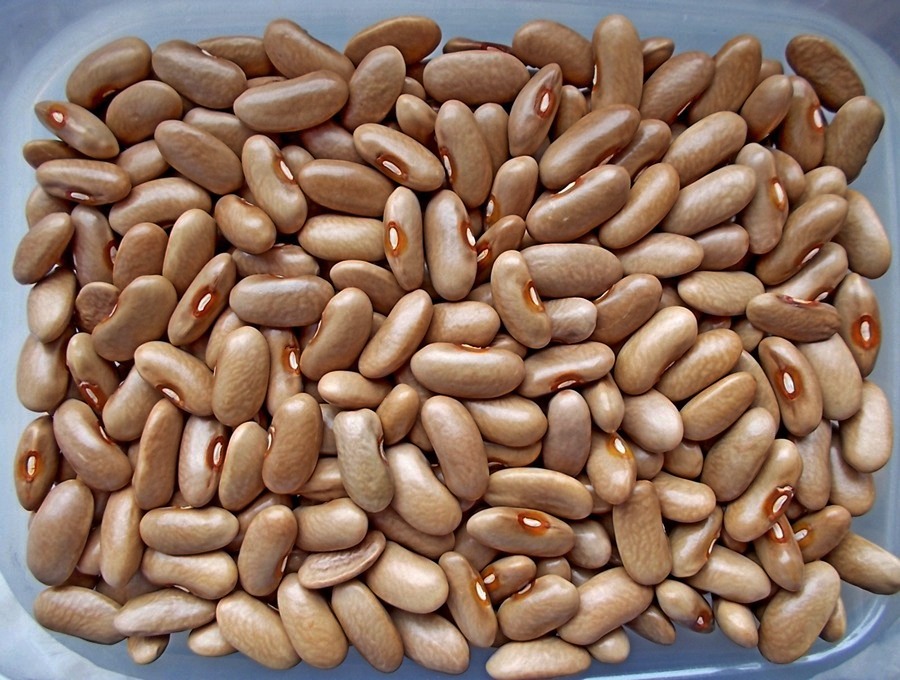 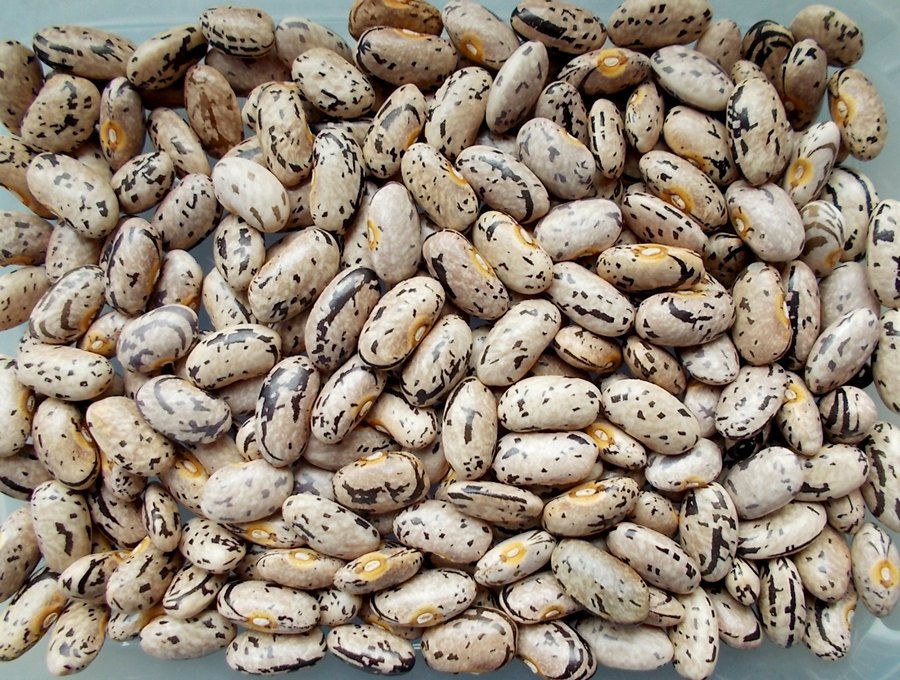