We worked in the rural garden again today. A lot of the plants are recovering from their near-death; and while many will still be stunted, all new growth is healthy. Two beans seem to have recovered more than the rest: 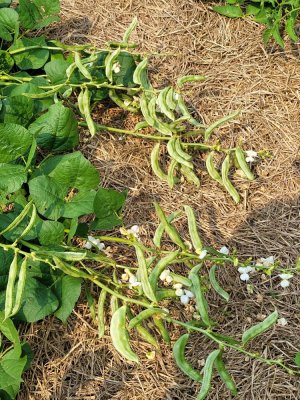 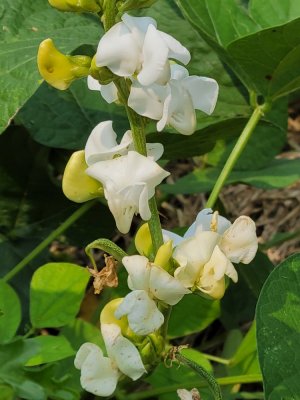 "India Bush" hyacinth bean. I suspect - but cannot prove - that this is similar or identical to the "Valor Bean Lakshmi" sold by Seeds of India. No, the camera was not tilted; the recent storms knocked over all the heavily-loaded stems. It has not only thrived in the tropical heat & rainfall, it is even sprouting new branches to produce a second round of blossoms. 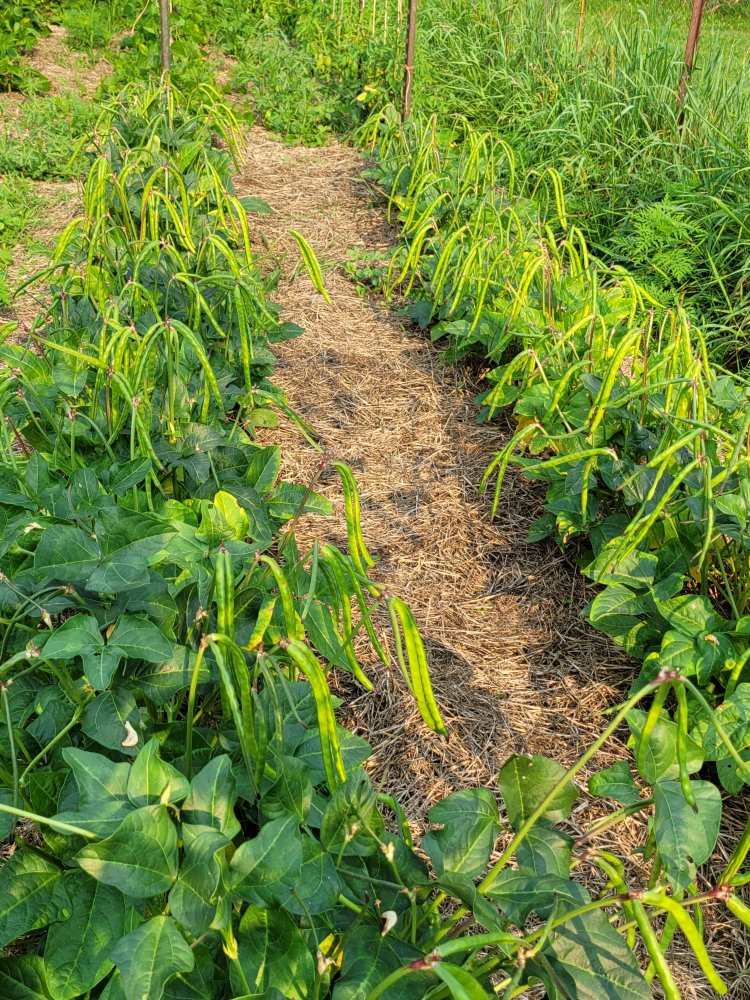 MN 13 cowpea. Although heavily stunted initially, it really bounced back once it was mulched & soil conditions began to dry out. The plants normally are more vigorous, but I'm happy to see it recover so well. The pole beans in the background (Sangre de Toro) are not so lucky. They are still stunted into bush habit, and likely will not recover.

Devastation is beginning to rear it's head in my gardens. I would never have believed it, but voles have arrived. I haven't seen these things for years. Since the last time I grew potatoes actually, which I'm doing this year for the 1st time in a long while. I have actually seen a few in the last month, but didn't think anything of it at the time. I wondered why perfectly healthy pole bean leaves were mysteriously starting to wilt here and there. Not the whole plant looks like, but parts. Such a disappointment, and I don't think there's much that I can do. So disappointed! Looks dreadful.

heirloomgal said:
Devastation is beginning to rear it's head in my gardens. I would never have believed it, but voles have arrived. I haven't seen these things for years. Since the last time I grew potatoes actually, which I'm doing this year for the 1st time in a long while. I have actually seen a few in the last month, but didn't think anything of it at the time. I wondered why perfectly healthy pole bean leaves were mysteriously starting to wilt here and there. Not the whole plant looks like, but parts. Such a disappointment, and I don't think there's much that I can do. So disappointed! Looks dreadful.

i think @Zeedman uses mouse or rat traps with bits of dried apricots used as bait. we don't usually see them here that often. it surely isn't fun having to fight off or trap critters to protect the chance of harvest but sometimes it just has to be done.

we have a pretty healthy snake population and that might help in keeping the numbers down, but once the population gets going it can be hard to bring it back down (same with chipmunks and well mice are snacks for about anything that eats other critters so they're always around). Tuesday i was just talking about shrews with someone and was glad i'd only seen one the whole time i've been here (so far)... i've seen thousands of mice and chipmunks and perhaps a few dozen voles (in comparison) - oh, and one rat.
Last edited: Aug 4, 2021

heirloomgal said:
Devastation is beginning to rear it's head in my gardens. I would never have believed it, but voles have arrived. I haven't seen these things for years. Since the last time I grew potatoes actually, which I'm doing this year for the 1st time in a long while. I have actually seen a few in the last month, but didn't think anything of it at the time. I wondered why perfectly healthy pole bean leaves were mysteriously starting to wilt here and there. Not the whole plant looks like, but parts. Such a disappointment, and I don't think there's much that I can do. So disappointed! Looks dreadful.

Voles can get bad if left unchecked. I've got an established population on my property, which generally move into the garden when tomatoes ripen, or there is dry(ing) bean seed within easy reach. That is the reason I grew only tall soybeans in my home gardens this year, and one of the reasons I grow mostly pole beans. The voles could climb, but with hawks & owls nesting nearby, they seldom do.

So as @flowerbug mentioned, I set out traps near food sources at the first sign of damage. I use traps like these, which don't rot or rust, and have a bait cup. It is having to pull the bait out of the cup that makes these traps effective. Pieces of dried apricot (jammed tightly into the cup) or peanut butter work as bait, because the scent attracts them. I put 3-4 of these traps under any row where the mice are active, placing them under the foliage (where mice make their runs) and marking the locations with survey flags to make them easy to find. I have about 50 traps total, and when the vole population peaks, I might catch 10-15 voles & field mice in a day. It is important to clean the traps daily, wash them before re-use, and change locations at least weekly - or the voles learn to ignore them.

These traps are pretty durable. I have to replace 2-3 each year, usually because the bait cup broke... or more often, because I stepped on them.

A few wander away mysteriously, probably because a predator took off with the trapped mouse, dragging the trap with it. You would think that I would come across a few of those missing traps by now, as I wander the property; but I've never found one. I have 6 larger versions designed for rats, that I only use if chipmunks become a problem (which is seldom).

Oh, and the funny thing is, I have fewer problems with voles in my rural garden than I do at home. The Whiskers Gang there keeps the Rat Pack under control.

I don't use that specific trap and certainly not 50 of them, but the ones I use have holes in the base. I use those holes to wire the traps to something solid so the traps don't disappear. That could be something that want to eat the mouse or something bigger getting caught so it drags the trap off, maybe a rat, possum, raccoon, or cat.

Setting 50 of those would be time consuming. I hate to imagine a problem that big.

Zeedman said:
...
So as @flowerbug mentioned, I set out traps near food sources at the first sign of damage. I use traps like these, which don't rot or rust,
Click to expand...

i've seen some all metal versions of traps like those and wanted to get a few for here, but no place local carried them and it was an hour drive one way to see them (i don't like buying things without seeing them first). i tried to talk my brother into stopping and picking some up for me because he does get out and around but he wouldn't do it.

in order to keep the traps from wandering off they need to be chained and staked down well enough that whatever is caught by them can't pull them out or they can pull their tail or whatever out of the trap. i've found some rat traps many years later off in the north hedge where a raccoon or possum dragged it.

as much as possible i try to avoid buying anything with plastic in it that will be outside. they just break or degrade in the sun or don't last that long. weather can be tough and when it gets really cold that makes some plastics even more brittle. i have had to trap mice sometimes through the winter outside so i wanted some all metal traps to use for around the foundation of the house just in case i need them... otherwise we go through a half dozen of the old-fashioned Victor snap traps with the metal trip pan and wire and spring arrangement. they do work but they don't last too long. i think i've trapped maybe half a dozen mice with most of the traps before they break.

if you ever want to feel vicariously victorious you can go watch mouse and rat trap reviews on youtube. one guy (shawn woods) is fun because he tries all sorts of traps and so you can watch them as he has camera's set up so you can learn a lot about mice, etc behavior from watching those.

Thank you for the info @Zeedman @flowerbug @Ridgerunner
I didn't realize that traps might be effective with voles. Something worth looking into as new bean leaves wither by the day. I recall a few years ago a neighbour down the street putting out traps for chipmunks at their bird feeders, and while out with my dog we found one of their traps across the street from their house on the sidewalk. It had a very much alive robin flailing around in it, and had made it quite a distance. I never forgot that and it put me off the idea of them, but at the same time, I don't want to lose more bean plants. (I also come from a long line of bush trappers, and grew up hearing trapline stories that made my hair curl.) It's good to know I do have that option though.

All my garden pictures are starting to suck mud because the damage is becoming more and more apparent, much as I try to focus away from it. DD and I were going to make a garden photo collage for this year, in the fall, but these recent problems are becoming an obstacle.

So, had the kids take our cow to market. They got swindled and came home with a handful of beans. Threw them out the window, of course. In the morning... 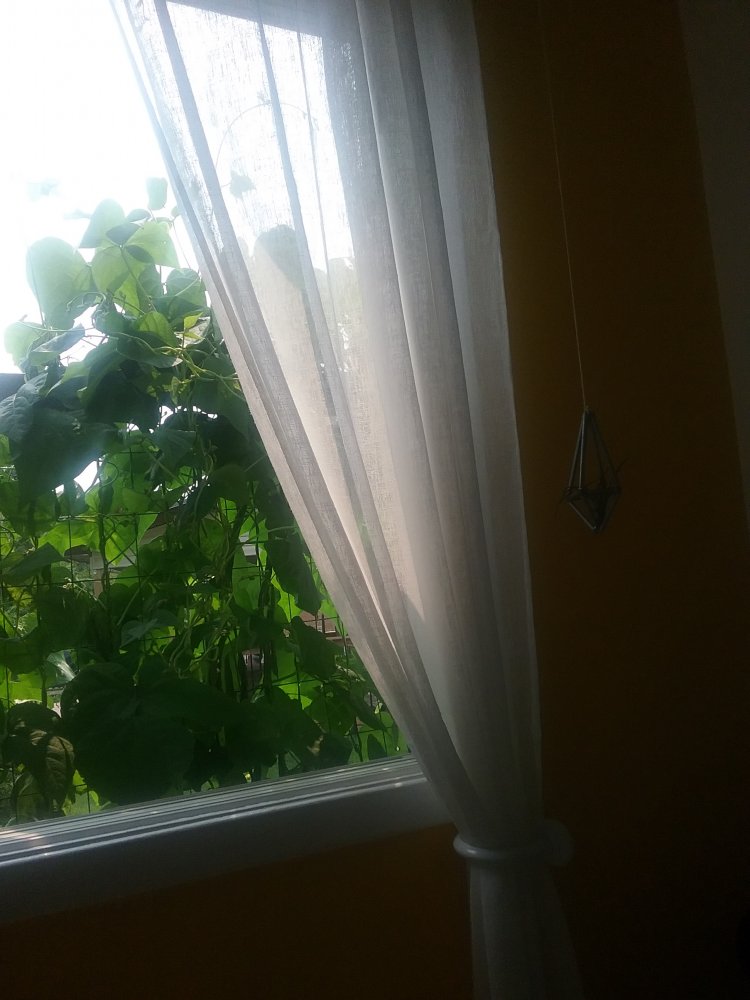 The funny thing about the missing traps (as in funny-weird) is that the whole garden is fenced with 3' of chicken wire. Mice can fit through the holes - but not a trap. Whatever took those traps either flew, or climbed over. Regardless, it doesn't happen often enough to warrant chaining down every trap... when all traps are out, it's enough work tending to them as it is. It has just become part of my gardening routine, like patrolling all the beans & soybeans for Japanese beetles every day. This year, it appears the mice may actually take less time out of my day than the beetles.

A few more photos of this year's beans: 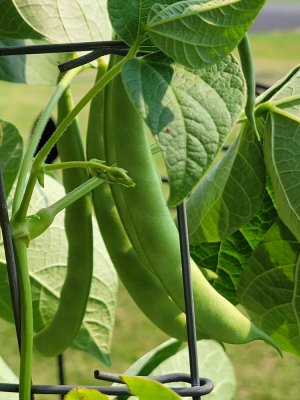 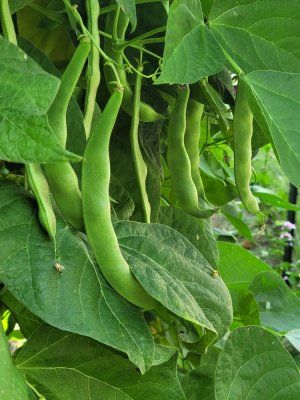 Budapest II (left), Jembo Polish (right), both in home gardens. Jembo Polish will be the standout winner this year, that trellis is impenetrable top to bottom. Most will be let go for seed & outstanding shellies. 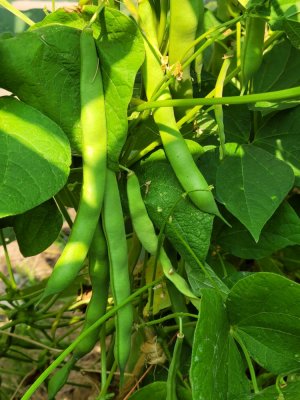 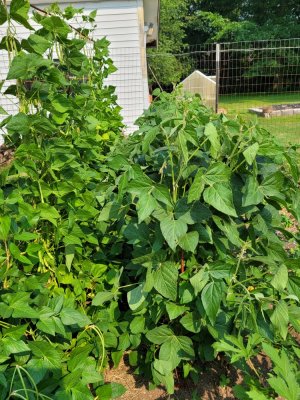 Bert Goodwin, in one of the home gardens. It is a weak climber, almost overshadowed by the tall T-239 soybean in the adjacent row.

All photos to follow are from the rural garden: 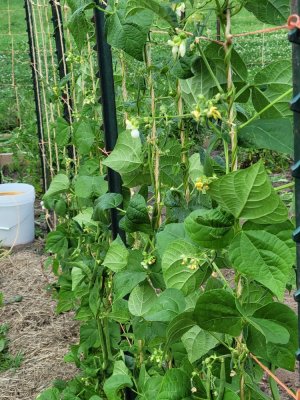 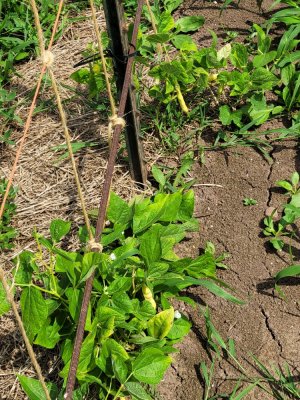 Sargas (left, pole dry bean) and Blue Blockeye (right, pole wax). Losses were heavy in both rows. The remaining plants of Sargas are recovering, but Blue Blockeye seems to be irreparably stunted. 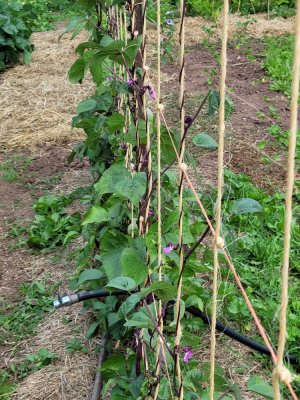 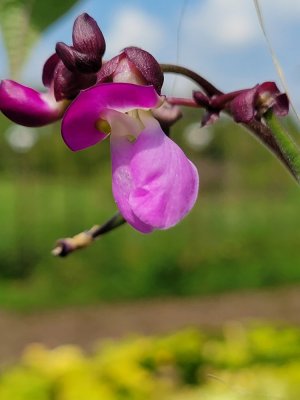 Grandma Robert's Purple Pole. Nearly died, and still severely stunted. The plants are reviving slowly, it remains to be seen if they will get much larger. 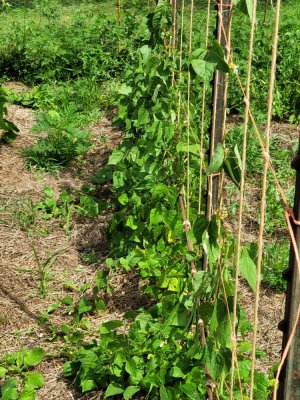 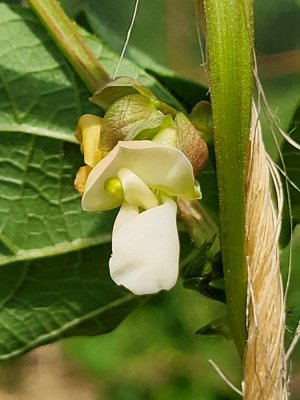 Sangre de Toro, pole dry. Only lost a few plants, but all of the survivors are very heavily stunted & do not appear likely to recover. I'll hit them with some fish fert to see if I can shock them into regrowth.
You must log in or register to reply here.
Share:
Facebook Twitter Reddit Pinterest Tumblr WhatsApp Email Share Link