Of course it's name would suggest a South American origin. I obtained the bean in 2011 from Any Hawk's Simply Beans where she grew her gardens in Calhan, Colorado. Amy Hawk has retired from selling beans so she is no longer a source for this bean. I harvested a few nice beans to plant again next year but this years grow out was so small it almost didn't exist.

This picture reminds me of something I forgot to mention about my network 'Monachine' beans that I just sent off. Those beans did not grow quite as good as the others for some reason, they still did okay but not the perfect sepcimens I aim for. I did pick out and send the very best of the bunch to you though, and strangely, in my soil the beans had more brown colouring on them and weren't quite as speckled with white. I don't think they are crossed or anything, since the beans in the pods were speckled with white BUT some were also more pure brown. Oddly, the best formed beans were the brown to browner ones. The more white speckled ones didn't do as well. Because I sent the best of what I had, many in there will be brown. Maybe you've seen this before, I'm not sure so I wanted to give you a heads up.
Last edited: Nov 27, 2022

heirloomgal said:
Those purple beans tho!

I can't believe how much those look like Lilascheke, but it's clearly a different bean because Lila has yellow pods. So GORGEOUS. And all those bean jars!! Do you cook them up in those amounts jb? Like, one jar at a time?
Click to expand...

I think these have more white than Lilascheke but I'm not positive. The pods were green though. It wouldn't surprise me if they were related!

I soaked somewhere around 6 quarts of dry beans for maybe 16 hours, boiled them for 30 minutes in a 5 gallon pot that was threatening to overflow, scooped them into 40 jars, and processed them in a pressure canner in two loads - one with 20 pint Ball jars and one with 18 half liter Golden Harvest jars. The two that were left got dumped back into a small pot and boiled for a little longer to make sure they were done and then went into the fridge.

jbosmith said:
Also, garden-adjacent - these were a mix of pinto varieties from previous years with some of this year's Seneca Allegheny mixed in. 40 pint/half liter jars worth, though two jars worth didn't fit in the canner due to using metric jars from Canada which are just slightly bigger.

@jbosmith , I've never tried canning beans this way. Can you write how you do it?

Artorius said:
@jbosmith , I've never tried canning beans this way. Can you write how you do it?
Click to expand...

They're low acid so you need a pressure canner. I have the Presto 23 quart. Then I do this:

National Center for Home Food Preservation | How Do I? Can Vegetables

I always do an overnight soak rather than the no-soak methods. The latter just seems like extra work to me.

Edit: The Presto is a dial guage canner but I use this 3 piece weight on mine so that I don't have to calibrate the guage all the time: https://www.amazon.com/Presto-50332-Pressure-Regulator/dp/B00Y7OSDV8

Location
SE Indiana on a narrow ridge above the Ohio River

@ducks4you I'm afraid they won't photograph well as they are, so I'll try to describe them. Each individual trellis for five to six vines is made of heavy woven wire, it's four-foot high fence but I rolled it out flat and cut it lengthwise into strips. Each strip has three or four of the long wires still connected by the cross wires between. I cut them to 8' lengths and bent them roughly into right angles which strengthened them up quite a lot. The bottom cross wires were removed, leaving prongs to stick in the ground. They are rigid enough to stand up vertically on their own but would not do so when covered in vines.

I took cattle panels and cut them into 8' lengths and folded them similarly but not fully 90 degrees. These also were trimmed to have bottom prongs and also stand well on their own. Still not enough for a full growing crop of beans in a wind storm.

Next step is a single 6' T-post set at each end of the bed to secure the vertical cattle panel. Then a couple runs of electric fence wire about 7' off the ground. Individual trellises will be secured near the top to the electric fence wire.

Sounds like a lot of trouble but once they are all done, I think they will work well and from then on be very easy to assemble and dissemble as needed and should last a long time. All the parts individually are light weight and instead of moving lots of T-posts each year there will just be two per bed, well maybe three on the longer beds.
Last edited: Nov 28, 2022

Here is another purple podded bean where Robert Lobitz couldn't get away from tan seed coat linked to purple pods. This bean was not particularly productive last year and in a different soil the results were about the same. Total seed collected from about 10 plants was 5.35 ounces (151.66 gm) 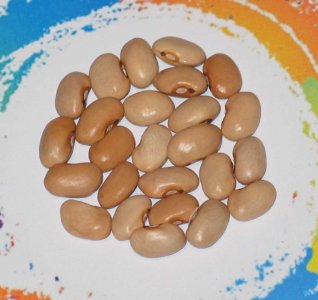 This segregation came about in 2014. It's a nice looking seed when they well filled out but it's just not very productive where ever I happen to plant the bean. This will be the last year I will plant and grow this segregation. 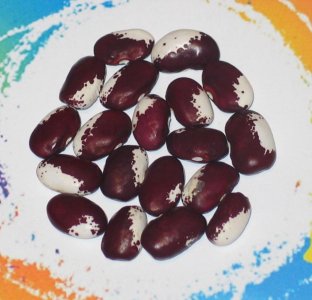 I have planted this bean many times and I'm still waiting for it to stabialize. I love the appearance of the seed and will just probably keep trying. It is productive and from about 10 plants I got 16 ounces of seed (453.59 gm). Last year the bean produced five segregations and this year only two. First photo is Red Eyed Ranger then photo 2 and 3 are the segregations. 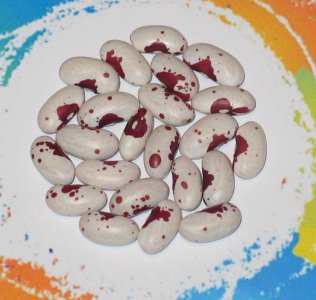 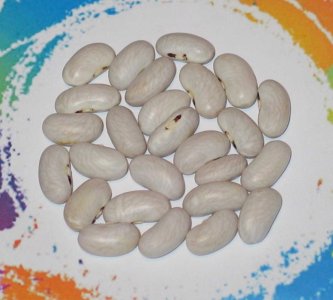 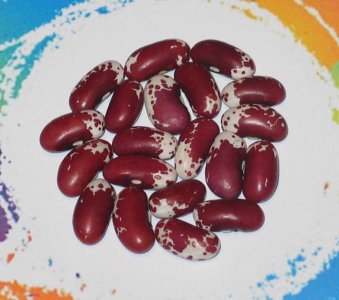 Another try at growing a very late bean. Planted in the same bed as my pole beans. I got only 2 ounces of beans (56.69 gm). These seeds were from harvesting pods that were still completely green and dried in my house for about 3 weeks. I obtained the bean from Tierra Farms in Santa Rosa, California in 2011. 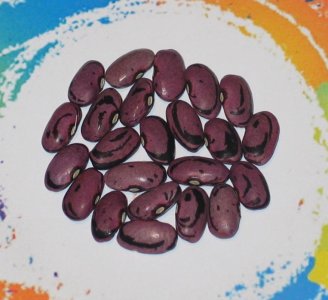 Another try at growing a very late bean. Planted in the same bed as my pole beans. I got only 2 ounces of beans (56.69 gm). These seeds were from harvesting pods that were still completely green and dried in my house for about 3 weeks. I obtained the bean from Tierra Farms in Santa Rosa, California in 2011.

Was the 2022 season shorter than average for you @Bluejay? I don't remember those being very late maturing last year when I grew them, but it was a looong summer for us last year, maybe that's why they didn't seem late.
You must log in or register to reply here.
Share:
Facebook Twitter Reddit Pinterest Tumblr WhatsApp Email Share Link