Dirtmechanic said:
I know I am involved in this somehow but being such a slow drawl southener I just have to figure out how. Oh well I guess I will just post some January pics of how GREEN everything is down here...

Our cold is killing off bugs. Eat your heart out, y'all.

Our cold is killing off bugs. Eat your heart out, y'all.
Click to expand...

lol yes we have squadrons - actually entire flying wings- of any creature you wish me to send you. For science of course.

The funniest thing has that issue of sex. I offer them sexy hormones and they come jump into a plastic bag of death... Its disconcerting how easy the response is. Stay strong... and celibate if necessary!

digitS' said:
(Is cabbage difficult to grow in the South?)


Porto, where this kale soup is common, I guess, is not in the South. It's north of 41° North. That's Wyoming's southern border. It's north of NY City.

I'm real close to the Gulf Coast. So close that the water keeps the climate really mild in winter. I can grow cabbage over the winter but would expect to struggle if I tried to grow it in the spring. It gets hot so early. When I was in Northwest Arkansas or in northern East Tennessee people grew cabbage and it was fine, but you got it transplanted pretty early. I'm not sure how people in Alabama or Mississippi would do with cabbage. @baymule have you tried cabbage in Texas?

I've lived in a few parts of Europe, usually around water. It's interesting if you follow the latitudes across to North America, at how far north most of Europe is. The Gulf Stream keeps parts of Europe a lot warmer than you might expect. And just being near water helps moderate temperatures. I spent two winters in Copenhagen. If you follow the latitudes that's way up in Canada but even the cold waters of the North Sea kept winters from being bitterly cold, most of the winter not much below freezing. Seed's winters or yours would be much colder. Elevation plays into it also.

Steve, this is just a theory of mine but I think the big difference in growing cool weather crops in the north versus south is not so much as how hot it gets during the day but how much it cools off at night. Again, elevation can play into that. I've lived up north and vacationed up north. Nights can be much more pleasant up there compared to down here.

Our cold is killing off bugs. Eat your heart out, y'all.
Click to expand...

eat my frozen heart out but please don't break your teef when doing it!

been a bit colder the past day for a change. this winter hasn't figured it out yet...

Ridgerunner said:
...how much it cools off at night. Again, elevation can play into that. I've lived up north and vacationed up north. Nights can be much more pleasant up there compared to down here.
Click to expand...

(Sshhhh! That's our little secret. Watch me shut that news down ...) Pleasant? Pleasant? You call it pleasant to go from the mid-80's to the low-40's in less than 72 hours? That happened twice in May, last year. Then. It went from the 90's to 40°f within 5 days in early June! Pleasant?!

Okay. So, you put an extra blanket on the bed . But yeah. This was really rough on almost everything just starting to grow in the gardens and, a little less dramatically, it continued for several more weeks. We can have 75 days-to-maturity eggplants that have trouble producing anything after 130 days in the garden.

Yes, that Portuguese community in Northern California, it was as if they came straight across the Atlantic to settle at the same latitude in Massachusetts. Then, a few of them caught the transcontinental train and came to be fishermen and dairymen in northern California, where I used to live.

You are right but proximity to water can be weirdly moderating. That northern Cal community had 1667 growing degree days in 2019. Seattle, many hundreds of miles to the north, and on salt water as well, had 2786 GDD in the same year. The difference is that Seattle may be on salt water but it's also behind the mountains on the Olympic Peninsula. Eureka California has a sandbar ... of course, one could drive east out of Eureka and travel 100 miles over some mountains to Red Bluff California and experience 4912 GDD last year.

LOL I gave an electric blanket for Christmas and have enjoyed sharing it many mornings this winter!

@Ridgerunner I had a great winter garden when we lived in Livingston, it was maybe 125 miles to Galveston on the Gulf of Mexico. I grew all the cole crops through the winter. Then like you said, it got hot fast.

Here, it gets just cold enough, just long enough to freeze my efforts. Then it gets so hot so fast, that a early spring garden is chancy. A fall garden may be the way to go, but it is so hot when I should be starting plants that all I want to do is hug my air conditioner. LOL

i feel real awful for all you northerners dealing with polar storm after storm, just to show i'm a good sport put on my cold weather attire.. 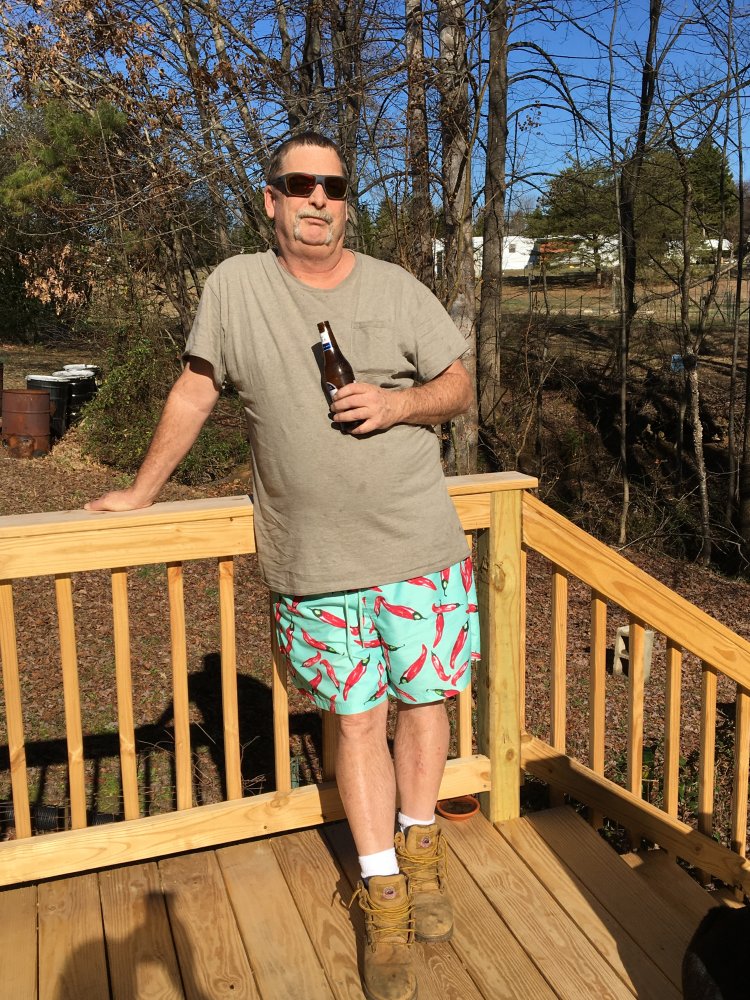 @majorcatfish, Yep looks pretty brutal down there alright. I bet you get peppered with comments about those shorts lol.

majorcatfish said:
i feel real awful for all you northerners dealing with polar storm after storm, just to show i'm a good sport put on my cold weather attire..
View attachment 34065
68* with all windows open........