i hope i can get some of that done today. fresh steamed beans is one thing we look forward to all year. 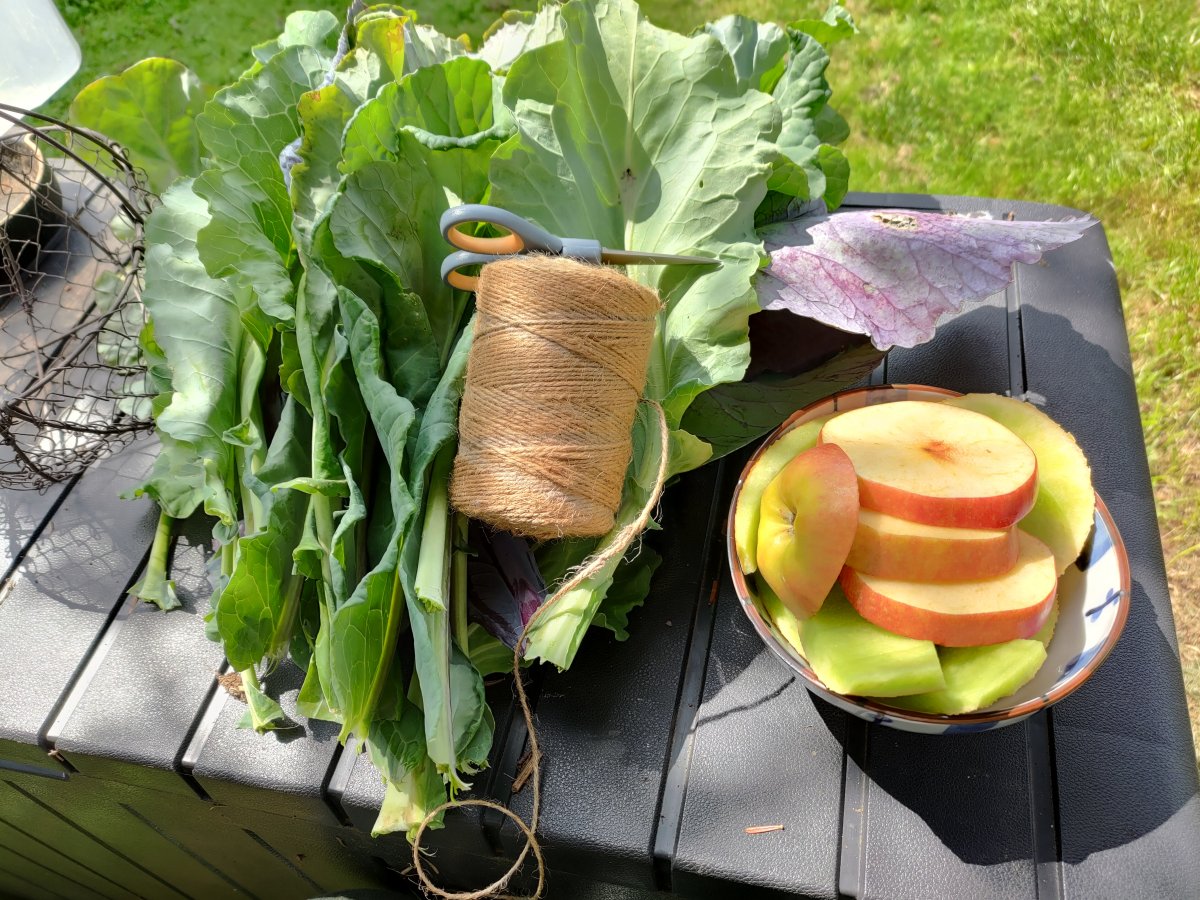 Ridgerunner said:
Mary, I think it depends on the season. Often my "early" tomatoes aren't any earlier than the others. Some years they are but not all that often.

I love the taste of Black Krim, that flavor is hard to beat. But mine usually don't produce all that well.
Click to expand...

I keep planting 1 Early Girl as insurance but I think I'll stop. There's no reason for it and my heirlooms do fine.

It's hard to say how much each variety should produce. I love Black Krim too and I think it's a good producer. But this year my favorite Japanese Black Triefele has the biggest tomatoes ever and seems like a good amount to me. But again amount seems to be relative to each one of us.

i got the gardens watered, finished up a project that's been sitting there since last year and then moved some rocks and then showed the initial results to Mom because she will do the next part (decorating and arranging yet more rocks ). at that point it was a day.

later on i had a few other things to do and was examining a plant that the deer had munched on out front and next to it was a little plant that looked familiar enough to me but it was in the wrong place. so i gave it a tug out hoping it was all coming out with a nice root, but the root broke with a bit of some root left on it too. and yes, indeed it was a sassafrass tree. the leaves taste like chewing gum. so i brought that piece in and put it in some water with some rooting compound to see if it will survive. i also removed most of the leaves to reduce the stress of being uprooted and mostly derooted. *crosses fingers and toes* i've never had luck transplanting these sprouts before as they've often appeared in other places where i don't want them and tried to move them. no luck. we'll see if this one makes it...

i feel an eight hour nap coming on... *yawn*

weeded this morning until it got too hot out. came in and cooled off in the shower. was supposed to pick beans too but that didn't happen until just a few minutes ago when i took off everything but my shorts and shoes and went out to pick. there's a nice breeze and i wasn't overheated at all for the short time i was out there, but as soon as i got into the garage where there wasn't a breeze it was pretty blah and i was glad i was coming inside.

prepped the beans and they're ready for steaming up later. mmm, my favorite summertime garden treat, steamed beans and a bit of butter.

What did I do?

A lot of sweating! High 80's by noon with almost zero breeze. Fires in nearly every direction but just outside of the good air quality numbers.

Pulled the pea trellis down, pulled the peas and planted bush beans. Risky but surely it should work in 2021 to have them go in this late.

The yellow jacket hornets are on serious patrol in the veggies. This just might be why there are so few potato bugs and may explain what happened to the flea beetles. Like the spiders, the yellow jackets are useful garden visitors .

There was the tiniest handful of Velour beans to bring home, some zucchini and too many cucumbers. Oh well, we never buy cukes at the store so we may not grow tired of an abundance coming out of the garden too soon. They're Great on a Hot Summer Afternoon!

I potted 2 sea lavender and planted one in my little garden bed.

Checked out my raised bed and watered of course then fed all my plants with organic seaweed feeder.

My potted cucumbers are coming on rather nicely.

I've recently met a young guy that appears to be interested in helping me too set up my beans, they will need to be protected from my chickens. He also hope's too be keeping my garden trimmed.

Time will tell if he is reliable so keeping my fingers crossed.

He turned up today with a tonic to help my poorly chicken, bless him I had only sent a text him a few hours before.

Spent a couple hours in the garden before it got too hot. JB Beetle Patrol, finished watering, and harvested some okra & eggplant. 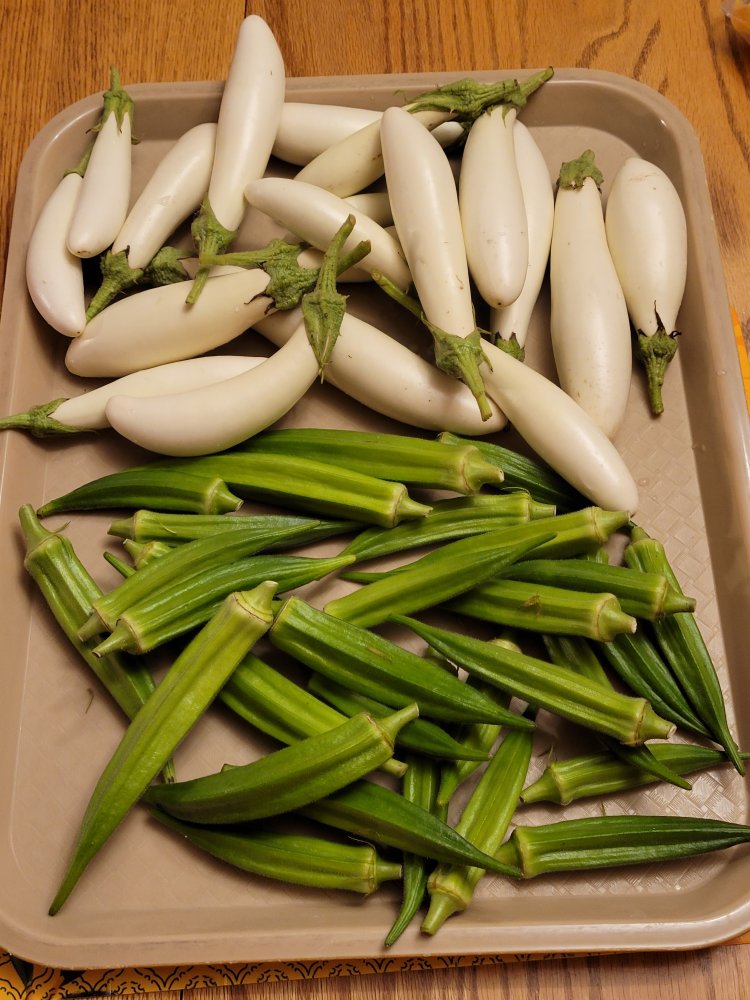 Then late in the day, DW & I drove out to the rural garden. Nearly everything there still looks sad... stunted, but recovering. We did pick a few cucumbers, some tromboncino "zucchini", and a little more okra. 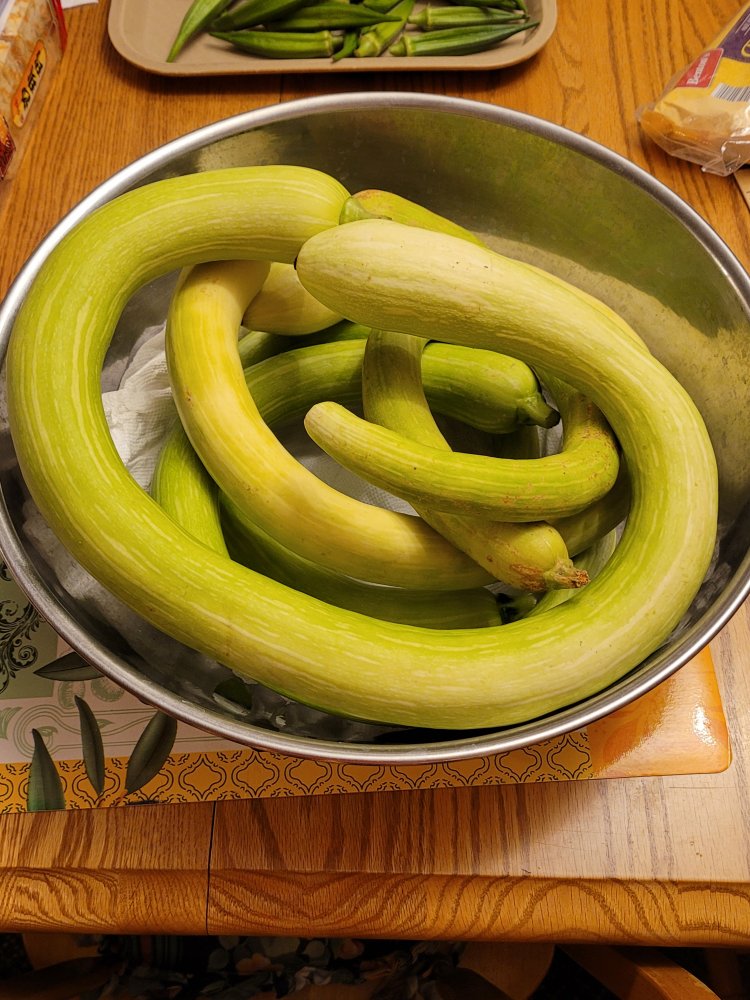 Tromboncino. A little large, but since the neck (90%) is seedless, still good.

Hard to believe we had to water, the ground was so wet only a week ago. None of the beans or cowpeas in that entire garden are growing normally. All of the tomatoes & peppers are stunted to some degree as well, though a few of the peppers seem to be recovering. It is interesting to see which plants have suffered least from the heavy rainfall earlier in the month: soybeans, sweet corn, tromboncino squash, gherkins, tomatillos, okra, water spinach (of course) and orange-fruited eggplant. A few others (cucumbers, adzuki, black gram, green gram, and bitter melon) are recovering well & putting out new growth.

@Zeedman i saw you mention that you were going to water and then looked at the radar and saw storms heading your way. hope it doesn't end up to being too much too often again!

in theory we're mowing today and also in theory it might rain. we'll see which theory works out. my own theory of the moment is that i need to make some breakfast... brb...
Last edited: Jul 27, 2021

flowerbug said:
@Zeedman i saw you mention that you were going to water and then looked at the radar and saw storms heading your way. hope it doesn't end up to being too much too often again!
Click to expand...

Fortunately the majority of the over-night rain went just North of us, we only got about 1" or so... not enough to be a problem. I was able to walk carefully in the home gardens late in the day, to patrol for beetles & pick some near-dry pea pods.

I am more concerned about the storms forecast for tomorrow, which are likely to be severe in my area. Both of my surviving pea varieties are drying down now, so I hope to pick any near-dry pods before the rains arrive.

DW jokes that the EAA (in my area this week) is causing the storms, blaming it on all the propellers stirring up the atmosphere.