That was part of my problem years ago as a potato grower. The second problem, I suppose, was the availability of so few varieties that growing what could be purchased in the produce aisle so cheaply made the enterprise less attractive. That was in the 70's and things changed (& so did I) .

I wanted to try growing potatoes under hay and had access to just about all the rain-spoiled alfalfa that I wanted to haul off. The voles moved in!!! It was a large area ~ of a large garden. I found ONE spud that had not been chewed on! I was NOT gonna eat potatoes that a rodent had climbed over and eaten on ... I threw that ONE spud into the trees and left the others to freeze.

All the hay had been moved off the ground. My tomcat caught one mouse during the work and disappeared back to the barn. My female cat killed something like SIX but ... I was already a little mad at both of them.

Steve
having potato cakes for my 2nd breakfast - unfortunately, since my potato plants are just above soil level right now - the potatoes are from the store
Click to expand...

Rodents are a big problem if I don't let my dog roam freely. She damages some things but she also catches lots of voles.

It is now official, the seed I saved has 0% germination. Not sure how I accomplished that...... lost 40+ days, will go buy some seed.

The good news is the tomato variety @Zeedman sent me are blooming.....

My first time to build the support for cosmos 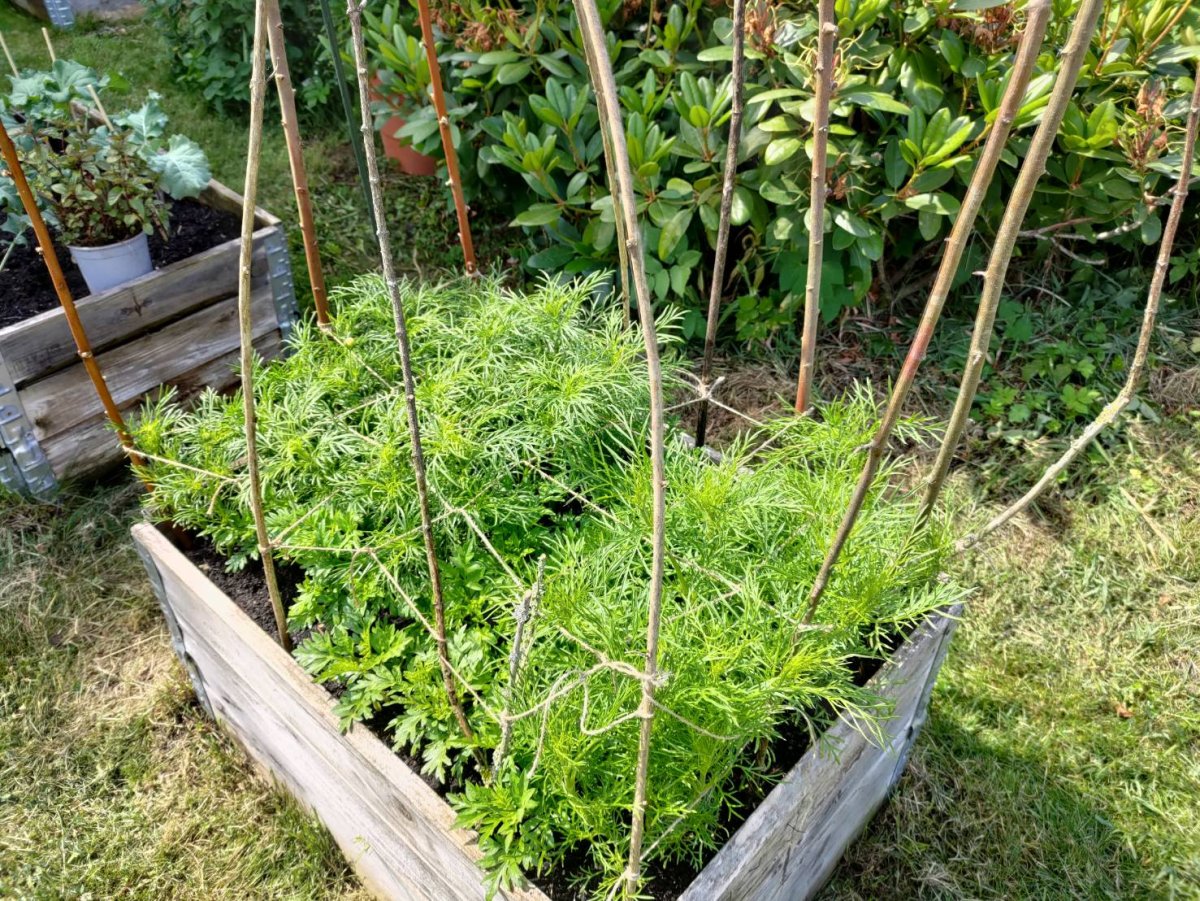 Well, every year I did something better than last year 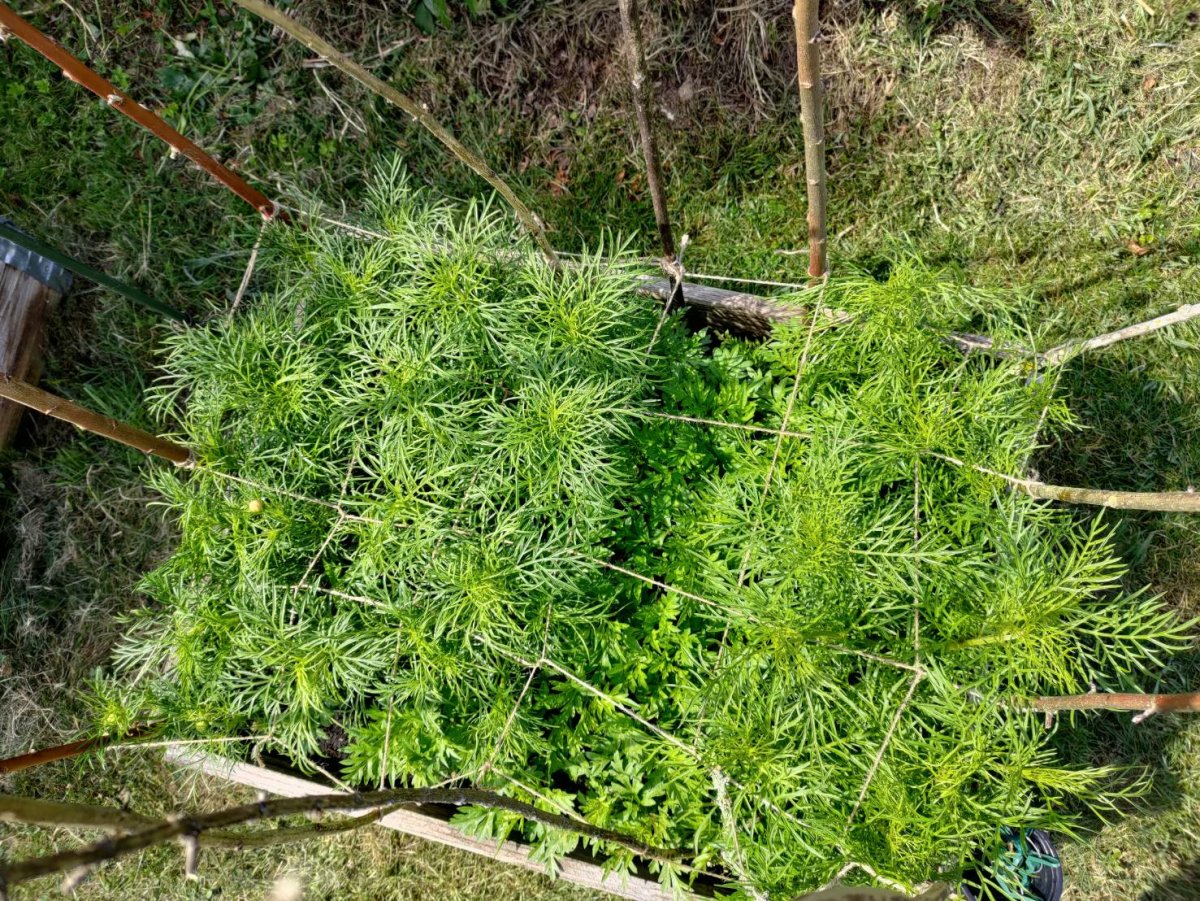 I used to have more dahlias and, perhaps, some additional trouble keeping the tubers through the winter. (Sympathize @seedcorn )

I would put some Cosmos seed in the ground early. When a dahlia failed to emerge, I would fill in the bed with a cosmos. They would grow to about the same height and would compliment the dahlias growing around them.

I used to have more dahlias and, perhaps, some additional trouble keeping the tubers through the winter. (Sympathize @seedcorn )

I would put some Cosmos seed in the ground early. When a dahlia failed to emerge, I would fill in the bed with a cosmos. They would grow to about the same height and would compliment the dahlias growing around them.

Hi Steve, you remind me about something I might screw up this year.

Yes, it's also about Dahlias. Last year was my first year to plant Dahlias seriously, and I also tried to lift most of the tubers, clean, dry, and then store them. It's like a gardening academy, and I pick one or two plants to learn about every year.

Ok, Dahlias - till the end of autumn, I became lazier to keep lifting the tubers up. I thought, well, maybe some will successfully survive if the winter is luckily not too harsh.

The spring arrived. I tried to dig out some of the tubers, and they were dead. The frost and snow fully destroyed them.

I thought, well, lessons learned - I should always lift Dahlia tubers; after all, I live in a place where the winter might be too harsh for them.

With a bit of sorry and regret in mind, I transplanted corns and tomatoes to fill those beds. We have to move forward.

Then summer arrived, and the corns and tomatoes grew up happily. BUT, day after day, more and more Dahlias are greeting me.

Uhh, I have no idea what to do now - I pinched all Dahlias to stop their crazy growth temporarily. But eventually, they will become the monsters they should be.

So far, I can only ensure they have enough water. For the tomato/Dahlia bed, I don't worry about the nutrients too much as most of the 500Liter compost/soil I put in the raised beds has a certain (good) amount of chicken manure and all kinds of green/brown wastes from the garden. 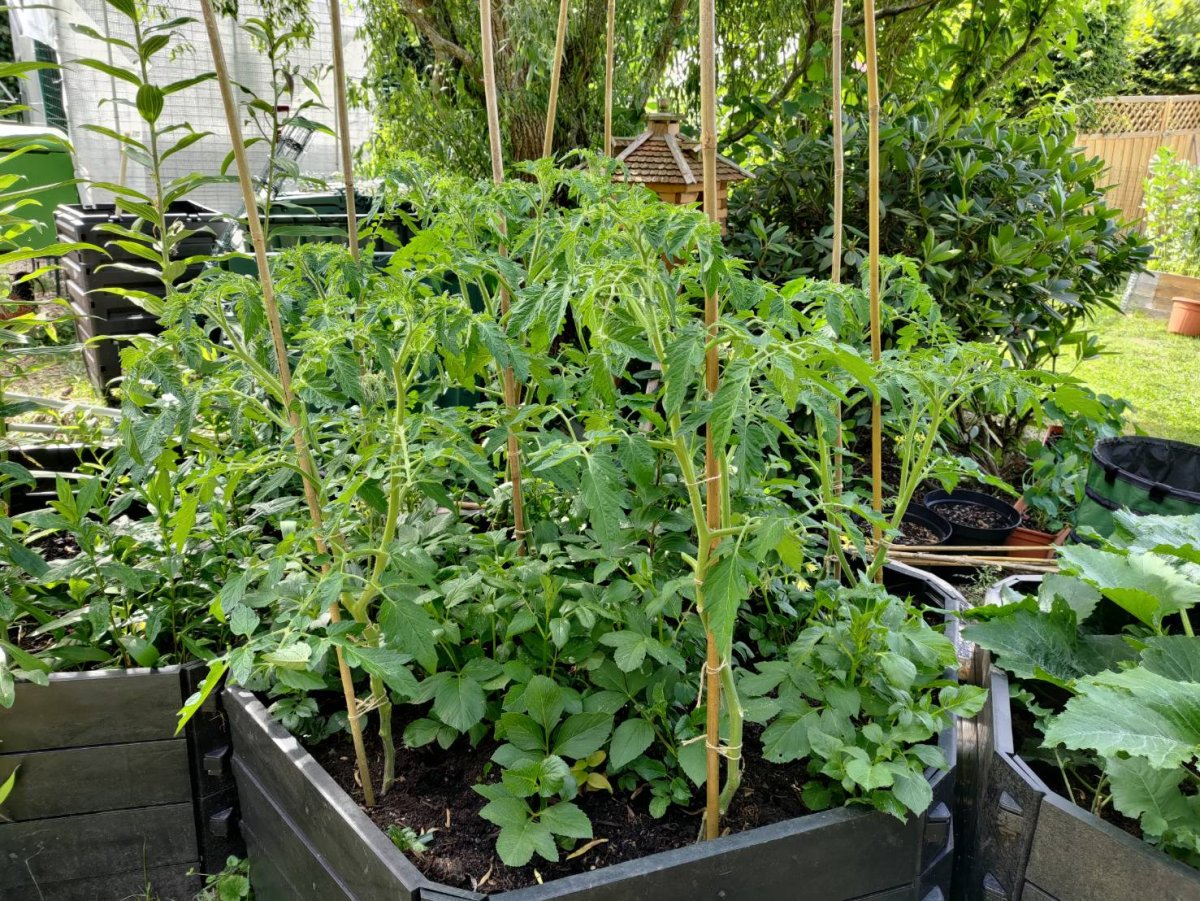 Although it shows no sign yet of the nutrition deficiency, this bed might need extra feed soon, as it's a single-layer raised bed, about 250 Liter only. 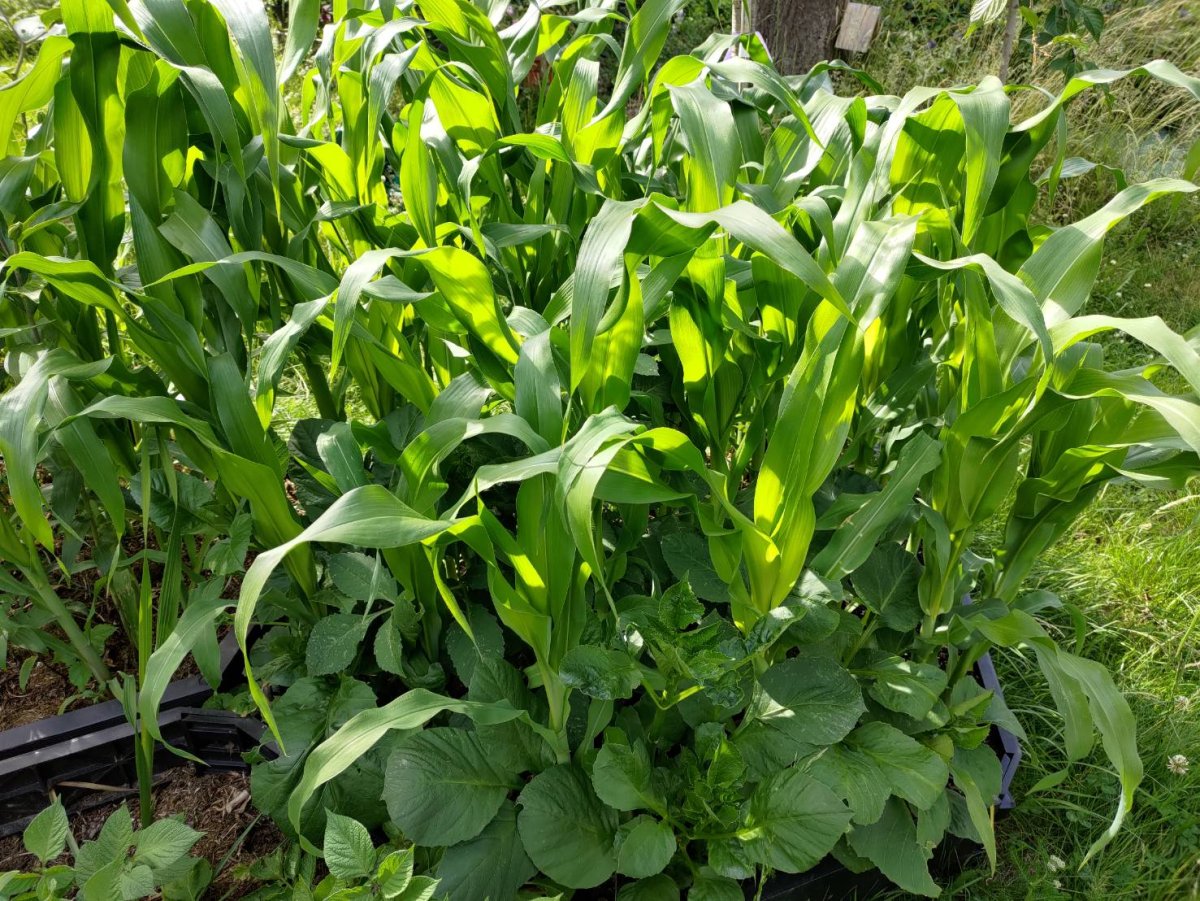 the last bean garden is ready for planting at last. this has been a much larger project than i was thinking it would have been, but now i can see that light at the end of the tunnel and it isn't an oncoming train. after yesterday i was wondering if i could even get it finished today, but it went faster and then once i hit the area i'd already dug through looking for quackgrass roots it was almost done all i had to do for that was level it and scrape a little gravel.

it also really helped that i started an hour earlier and it isn't quite as hot out today as it was yesterday.

after a break i'll get my seeds and go out and plant them all, water and then that will be it for the day.

I have been wondering about your climate, thinking about where I could recognize a comparison. Maybe southern Oregon/northern California --- between the Coast Range & the higher mountains .

I never, ever have dahlia volunteers. However, I understand that with a heavy mulch, some gardeners are successful keeping them through winters in that area of the US.

seedcorn said:
5th time planting OKRA!!!! Nothing comes up. So I soaked for 1-2 hours in sun first. Then planted 3 different areas in garden. Where I want it, 5-6 seeds per hill then planted over the top about 1” apart the entire row. One spot is another store bought variety. Planted some in cup in dirt where they sprouted. Can’t figure out what is going on! Dang mole or vole runs his tunnel right under plants stunting and killing along the way! Maybe he loves okra seed!
Also did some weeding. That is a never ending job for those of us NOT in Cali…
Click to expand...

Do you have any straw OR can you put grass clippings on top? I Think your seeds are sprouting and then drying out.

I have had sweet corn seed failure, too.

DANG, I Wish that the local FS was still around selling to somebody besides local farmers. They had THE BEST seed!!
Last year I asked Menards where there seed packets went. This was like, August 3rd.
Clerk told me...THEY THREW THEM AWAY!!! Like, the day before.

I was as WM on Monday and some clerk had just thrown together a stash of vegetable seeds, many varieties, into a mish mash so you had to search for Maybe what you wanted.
I sprouted, but didn't tend my broccoli, so I need just ONE package to start in late August for Fall Planting.
Tried to find just one plant, but the "Bonnie Plants" lady at WM (watering ALL of the dried out plants that the clerks didn't over the weekend, just let them bake in the sun,) told me that it was a Spring crop, so...no.
FORTUNATELY, I'm pretty sure I will find one package from some store.
In my study I discovered that when they turn yellow ALL of the little broccoli flowers can turn into seeds.
I'd like to pot up a couple of them right away and try to collect seeds.
HECK even the old onion seeds that I threw out in my north garage garden beds sprouted.
I THINK we are being sold old seed now.
@heirloomgal has the right idea about seed saving, and seed sharing.

Seed saving is an essential part of my garden and garden activities. For several years now I have been growing, on a bit of a focus rotation, a number of different vegetables, and flowers, to build a 'seed ark'. Heirloom tomatoes, peppers, beans and peas have been the main crops, but I've also...
www.theeasygarden.com

What Seeds are You Saving?

We know that the heirloom bean gardeners are saving bean seed. It is a great big part of what motivates their gardening, what interests them. What else? What seed are you saving this week or soon? I realized that saving pea seed this month has interfered with my habit of sowing a fall crop of...
www.theeasygarden.com

as much as i can learn about growing whatever crops we regularly have in the gardens i'm doing it. i'm always curious about how these plants grow and reproduce and what it takes to make them happy here. when i can get enough extra seed to share around it is even better.

the past few years i've been learning about onions. so far onions are doing good, i have finally found a mild green onion that survives my climate, soils and neglect. i have seeds forming up now - soon to harvest the seed heads to finish drying in a more contained environment.
You must log in or register to reply here.
Share:
Facebook Twitter Reddit Pinterest Tumblr WhatsApp Email Share Link