I’m done pulling off trim and pounding in tiny nails! I pulled trim off a bedroom door and was greeted by a crooked wall with big gaps! Oh no! The house has shifted! No! It can’t shift, it’s sitting on concrete. Hmmmm…..

Closer look revealed a CRAPTASTIC job of building a door frame. Crooked, messed up mess, well hidden by the trim that went over it. Whew! I’m learning fast! I’ll happily cover it right back up with new trim!

Look closely and you can see the stacks of flat trim used as shims to build a door frame, which, by the way, still isn’t straight. Waiting on a wrecker. My brand new car is graveyard dead. Not stranded on side of road, it’s in the driveway at son’s house. I put a trickle charger on it several days ago and it started right up. Next day it wound a little, then started. Next day, dead. Something is draining the battery. Hyundai Roadside is handling it. Wrecker will take it to dealer. But when I called it in, I was told 70 minutes., it’s been 153 minutes. Just got a call from AAA and they said 2 hours. This day is shot as far as accomplishing anything at the farm.

Yesterday Tree #1 came down. It was in front of the house, but just out of striking distance from the house. But it could fall on fence in 3 directions. Bennet’s cousin Lee, did the chainsawing honors. Neighbor Chase came for more firewood and Bennet loaded him up. Chase is supplying firewood to an elderly couple and to a elderly widow woman. I’m delighted that firewood is being shared by such a fine young man. Chase took his trailer home and came back to cut branches into chunks and load his truck. Bennet pushed on the tree with his tractor to make it fall in the right direction. The tree was so huge that the chainsaw overheated 3 times. They had to stop to let the saw cool down. 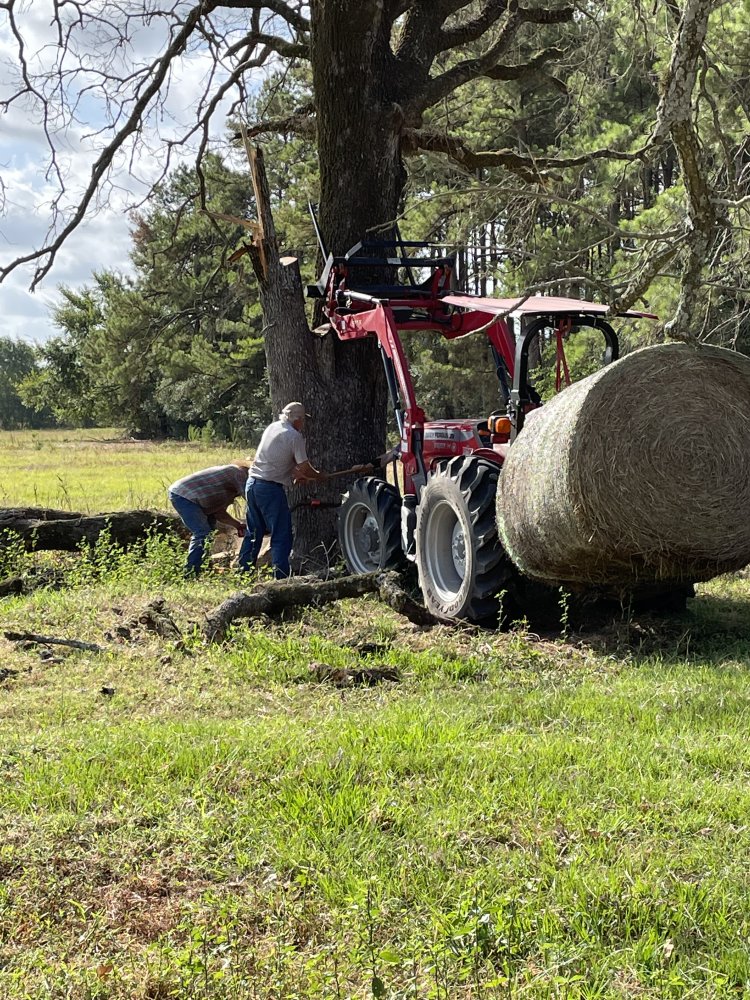 More sawing. They worked for over an hour, trying to bring this tree down. Finally it fell with a huge crash, breaking branches and sending them flying. Iced sweet served on the porch! Then Robert, my friend and neighbor from Lindale, came. He brought my mule to me on his trailer. Bennet loaded two big oak logs on Robert’s trailer. I helped Chase load branches cut in chunks on hie truck. Many stops for iced sweet tea, ram out, then ice water. Busy morning!

Everyone cleared out by 12:30 and I went inside and finished taking up quarter round trim around the floor. I went home close to 5, fed, watered, hay for sheep, fed dogs, heated leftovers for me. Collapsed. LOL

I’ll be back at the farm at daybreak to start on fence. Bennet is going to stretch a span down the driveway where posts are already up. If it’s secured on both ends, I can clip T-posts in early mornings until around 10, when it’s too hot to stay out in the sun. Then I can go inside to work on the house. I’m ready to cover the floor with plastic and tape it down, followed by taping off windows, etc, basically everything so I can spray Kilz on walls and ceiling.

I've never seen such a huge tree in Germany - most of them are afforested.

And it's absolutely A BUSY DAY! The photos are awesome; thanks for sharing.

Amazing size of that tree and such a giving spirit from the fellas. They are sumthin' else, for sure!!

Rhodie Ranch said:
Amazing size of that tree and such a giving spirit from the fellas. They are sumthin' else, for sure!!
Click to expand...

I prayed for God to put me where he wanted me to be, and he has. I am Blessed.

This morning Peggy and Bennet came over and we put up w run of wire. It’s stapled to heavy wood posts on both ends and 2 wood posts spaced out between them. I’ll use the cool mornings to put clips on all the T-posts, a slow tedious job. I’m grateful for the help! We quit at 10:30, was already 90F and sat on back porch drinking iced sweet tea I brought. They left and I went inside. I taped plastic to the floors. Still lack the 3 closets, utility room, couple small places in the kitchen and bathrooms. Only doing one bathroom at a time. Having somewhere to “go” might come in handy. I need to pry the mirrors off the walls in the bathrooms. They are glued on. I still have LOTS of prep work to do before I can start with the Kilz, texture and paint. Limping on both knees, sore and tired. I mixed up a paste of turmeric with black pepper in coconut oil for the screaming pain in my knees. I took a heaping tablespoon and washed it down with cranberry juice. It’s been 10 minutes, already the pain is subsiding.

@Ridgetop from BYH and her husband came in from California on the 25th afternoon. They had to check on their place they bought in northeast Texas and stopped here for a couple of days. I had rolls of scrap vinyl flooring from my sister in law. I like to use vinyl in kitchen cabinets because it’s indestructible and lasts forever. She went to work on that and got all the cabinets lined with vinyl. Her husband muddled the seams in the sheetrock I had taped and got almost all that done! I need to finish that up and sand. I worked outside on fence the first morning, the next morning I worked inside all day. They were a HUGE help! I rode them around the farm on the Kawasaki mule and they really liked the place.

One of the tires on my stock trailer is separating. Great. Have appointment on Thursday to get 4 new trailer tires. I’ll keep the 3 that are still “good” for my son to use on one of his trailers. They are 6 years old, tread barely worn, good enough for using locally by a man that can change tires. LOL

Today is 2 weeks since closing and I’ve gotten a lot done. Still lots more to do!

This morning I used 7 tubes of caulk in the utility room. It’s working, it’s nowhere near as hot as it was.

I started sanding the seams with that screen sander and extension stick. It sure beats climbing up and down the ladder! Peggy and Bennet came over and we got started. We hung a 16’ gate. We dug up a H brace and reset it . We ran a short span of fence over to the side property line. Looking at the gate picture and H brace picture, you can see the fence we put up down the driveway. The T-posts were already set, so we ran that wire. This is a nice grassy pasture in front of the house. I can’t use it yet, the front fence row, you can see that too, is all grown up in brush and trees. It’s a barb wire fence, won’t hold my sheep or dogs. I’ll have to clear the fence row, take up the barn wire, and put up sheep and goat wire—no time soon! We have another short piece of wire to put up, and Bennet can graze his cattle on it.

We quit at noon, hot and tired.

I went inside and finished sanding all the seams done by @Ridgetop’s husband. Then I did the touch up. I mudded the tape in 2 closets. 4:30, I came home. Tired, hungry, I tossed a T-bone in a skillet, cooked some English peas and ate like a starving dog. LOL Nearly 6 now, got to feed dogs, sheep, water them and take a shower.

I have come to the conclusion that I suck at taping and floating. Friends are coming to the rescue Thursday.

Peggy, Bennet and I put up two rolls of wire today. We had built and set the H braces yesterday. We got the wire stretched, stapled to the wood posts of the H braces and a few of the T-posts clipped, enough to hold the wire up. I got a lot of clips to do tomorrow.