I have been turning over a lot of dirt. The ground is soft, but I am taking back ground where the walkway has been getting wider and wider. I was going to plant tomatoes there, but I think I will plant a row of potatoes. I am getting ready to get the fence up for the beans. I have the main pole bean area ready to plant. I am going to put a row of peas and then I have an area for the last of the onions, leeks and I want to plant carrots. It might rain and we are supposed to have more cold weather. The tomatoes and peppers are all back in the greenhouse and I could have put them outside for the day and did not realize it was 71 today.

My shiitake log after a month of plugging them in 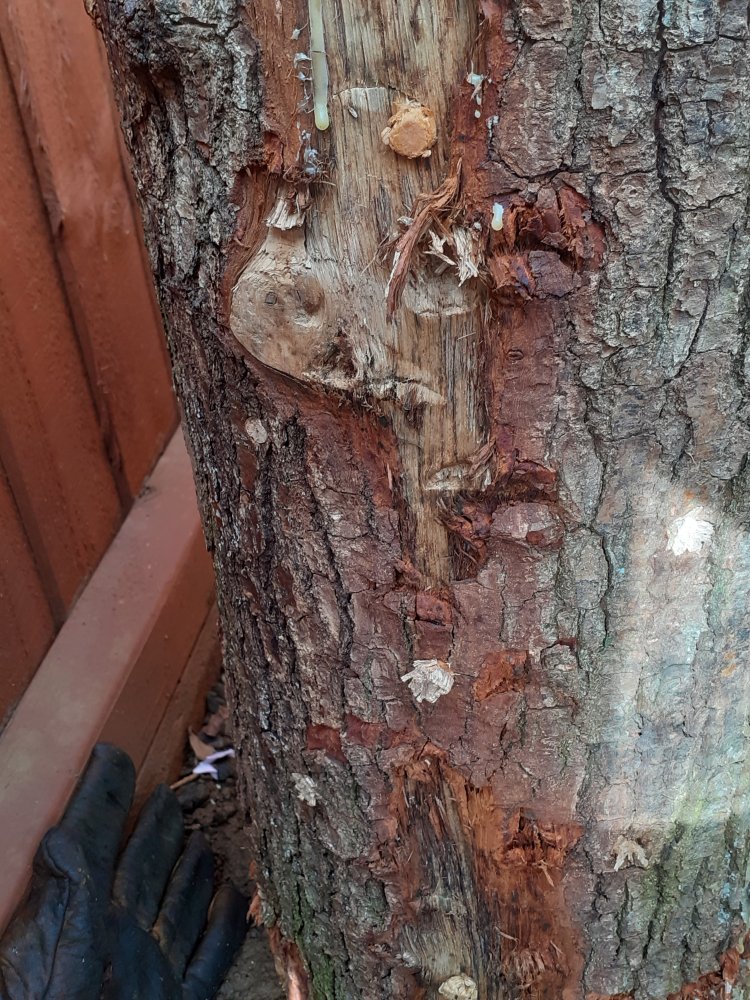 yesterday i tried to take some pictures and it was pretty windy so i didn't get too many. then i went back to work on the newest recovered patch that was starting to get some ditch grass coming up in there (as expected, i knew i didn't get it all) along with plenty of other weeds. with no other plants in there it is much easier to skim with the stirrup hoe and that would have been very easy had there been any rains. we've been getting some rain here or there but not recently enough so with our mostly clay soil the surface is more like a crust and the stirrup hoe is not really a good tool for breaking that crust, so most of the time i'm just skimming along and cutting the weeds at the surface where i can and for the grass i'm putting a lot more effort into it to break that crust to cut off the grass a few inches down.

it will be back. ditch grass is not the kind of grass that gives up easily. it's got roots that run easily and are very thick - they're often down a foot or two in the clay. the other grasses give up after a few rounds, these in comparison may take a few years to track all the bits of root down and to get them dug up and dried out in the sun. i'm pretty sure it was a grass that was planted along the large drainage ditch on purpose as it isn't anywhere else but along the ditch. i fight it back when i tries to invade the neighboring gardens. it's pretty determined. i am too. some season's it wins and others i win.

some time when i'm out there digging and fighting i should get a picture of the root system and the stem and perhaps someone can finally give me a name for it other than what i call it - ditch grass. i'd sure like to ditch it everywhere else it has tried to invade.

the only thing that really controls it is shade. any time i've mistakenly let other bushes, wild grape vines or trees grow over it that does take it out. guess what? for a large drainage ditch you don't want that to happen! cut those trees, vines and bushes down before they knock back your grasses because those grasses will hold the banks in place while in comparison the bare dirt below those plants will provide an easier (and faster) path for the water to flow and before you know it you'll lose your ditch banks to erosion. i wish they'd told us that when we moved here. there's no manual given for such things... so i've had to learn that the hard ways. i need to do restoration work along the bank to get it back into shape and to get the grasses back in place. to move a lot of dirt and grass from the middle of the ditch to back along the edges instead. i thought (mistakenly) that it would be easy to get down in the ditch and cut chunks of the grass and mud and move it back to the banks. hahahaha! heck no! i'll need an excavator to do it and while i do know several who have the equipment it probably won't be cheap to do...

meandering along back to the topic of what i did actually do yesterday was i finished weeding that garden and while doing that i was also picking gravel out of the dirt. there's always plenty of that which was put in there years ago along the edge that i'm screening or removing by hand. it can be a good resting task while recovering from not doing much all winter, to just sit there for a few moments and pick the gravel and put it back in the pathway.

after finishing up the one garden i thought of starting another but decided i should not overdo it. that was a good choice. i came in and Mom was finishing up some things she was making for today's events so i took a short break and then washed dishes and cleaned up the mixer so she could take a break herself.

i don't think so, based upon the pictures i'm seeing where a lot of it seems to be laying rather flat to the ground. ditch grass is a wide-bladed grass like quackgrass though. it just stands right up when it grows, it grows to about 3-4ft.

Common and Scientific Names with pictures -- that is what we need for identification! I used to rely on Virginia Tech but their new weed website makes too much on scientific names and botanical markers for this layman.

@digitS' , ditch weed was a term we used back in 70’s Iowa to describe the wild marijuana (hemp) that proliferated thru out the region. Fence rows, “road ditches” etc.
on a trip thru Iowa, my folks came by the farm to visit once and asked about those plants that looked like marijuana growing around the corals, they had fun with a little photo shoot of them holding some “ditch weed”!

Common and Scientific Names with pictures -- that is what we need for identification! I used to rely on Virginia Tech but their new weed website makes too much on scientific names and botanical markers for this layman.

their description doesn't show the same as the pictures i was seeing so perhaps it is quackgrass? i dunno for sure. i'm no expert on grass id or, well, plant id in general is not my strong suit.

Alasgun said:
@digitS' , ditch weed was a term we used back in 70’s Iowa to describe the wild marijuana (hemp) that proliferated thru out the region. Fence rows, “road ditches” etc.
on a trip thru Iowa, my folks came by the farm to visit once and asked about those plants that looked like marijuana growing around the corals, they had fun with a little photo shoot of them holding some “ditch weed”!
Click to expand...

Lucky our DNR officer wasn’t there, he would have them in handcuffs...

It is 44 degrees and going to be 33 tonight and in the 30s for lows until the weekend and then only 40s for low for basically the rest of the month. I have my plants on the kitchen table where they will stay. I went out to do some weeding but sprinkling and I decided to cut some rhubarb. I got chilled and built a fire in the woodstove.
You must log in or register to reply here.
Share:
Facebook Twitter Reddit Pinterest Tumblr WhatsApp Email Share Link